‘This Is Not the Time to Let Fear Take Over’ 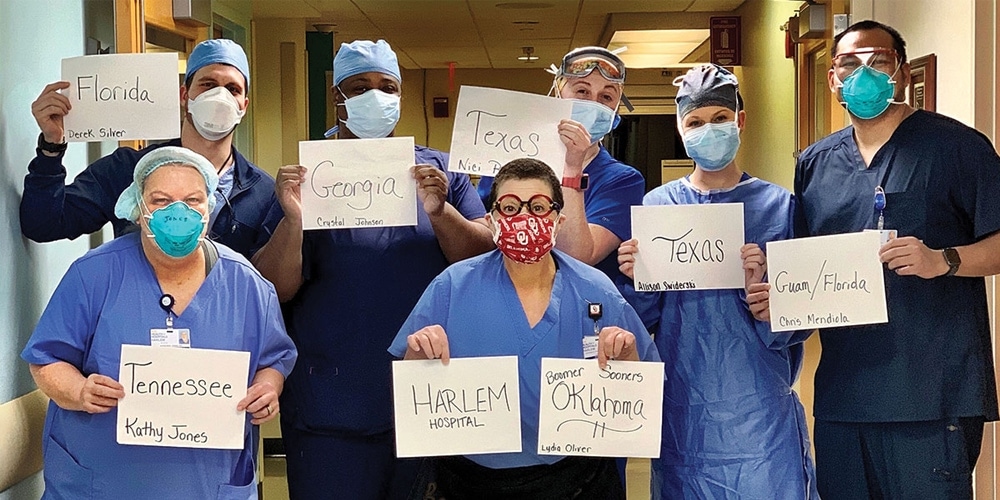 From March through April 2020, AdventHealth University (AHU) students from the doctorate of nurse anesthesia practice (DNAP) program reached out to staffing agencies to offer their skills during the COVID-19 pandemic.

To care for their communities, these students stepped up and returned to the workforce as the country’s needs grew.

David and Jissel Samons, a married couple and both students at AHU, went to New York City (NYC), where they were placed in Harlem Hospital’s intensive care unit (ICU) for the duration of their three-week contract.

Chris Mendiola, who joined the Samonses in NYC in the same hospital unit, said, “It was a last-minute decision to go up to New York, but we all felt that calling in our hearts to go and help when the opportunity presented itself.”

“We were a little skeptical going, and did not fully understand the seriousness of the virus,” the Samons couple recalled. “Still, those images and stories … did create a lot of uncertainty and anxiety.” Before they arrived at their unit, they recalled having mixed emotions of fear and excitement. “One second, we wanted to go home; the next second, we were hyped and ready.”

They learned during their orientation that 95 percent of the hospital had COVID-19 or were ruled out. The hospital had chosen the term “Code Gold” for COVID-19 patients who were in cardiac arrest. “We felt like we heard ‘Code Gold’ called overhead every 20 minutes for the first week we were there.” It wasn’t like anything they had ever experienced in the years they had worked in critical care.

Mendiola, who noted the hospital was already dealing with hardships before the pandemic, said, “[The hospital] was only meant to hold 14 ICU patients at any given time, but during the crisis, they had between 40 and 50 critically ill patients spread out across makeshift ICUs.”

Mendiola described his experience: “From day one, I already could see how the knowledge and training I had gained from anesthesia school could be used to make a difference. I was able to help collaborate with them about the management of ventilation settings, the use of different sedation medications, and give them my thoughts and opinions on not only the plan of care for my patients but also other patients.”

Their second week brought better news. “We could feel things changing because open beds remained available for longer than five minutes,” the Samonses recalled. Rumors from their emergency department (ED) nurses came that admissions had gone down. As they were leaving on their third and final week, the hospital was able to start closing one of the ICUs created in response to the pandemic.

The couple said, “Even though there were many scary and sad times, we had a lot of happy moments that we will never forget.”

“Overall, this experience was great, and I truly felt as if I was helping my local community fight COVID-19 on the frontlines,” she said.

When their contract ended at the end of April, Cinquemani and Jones took assignments as ICU nurses at Howard University Hospital. As of May, Cinquemani was working on the designated COVID-19 medical ICU for Washington, D.C.

“I feel blessed to work on the frontlines of this pandemic … where my skills as both an experienced ICU nurse and student registered nurse anesthetist are being used to my utmost capacity,” she noted.

When her CRNA school clinical was canceled, DNAP student Maria Klopfenstein called U.S. nursing in search of a job. “I had heard on the news that hospitals in San Jose [California] were half occupied by COVID-19 patients, but had no idea in a week I would see that first-hand.” She described her fear about the lack of PPEs, and possibly contracting the virus and passing it to her husband and family. “But, this is not a time to let fear take over. It's a time to step up and do what I was trained to do,” she said.

Klopfenstein worked in the “hot zone,” wearing full PPE for entire 12-hour shifts. She recalled, “I listened as a patient told me she just wanted to make it to her 76th birthday next month, and then she would be happy letting go.” Fortunately, she was able to see some of her patients recover and be sent home. She said, “I feel honored to serve during this fight.”

Manuel Tolosa, DNAP Department vice-chair and assistant program administrator of the DNAP program, said, “They all put their safety and their family’s safety aside to fulfill what our God has called them to do — take care of patients that needed their help. Patients who — perhaps our students’ face was the last they saw before they passed — were comforted by our students. They truly practiced health care as a ministry, and I couldn’t be prouder.”

The original version of this story was posted on the Southern Tidingswebsite.