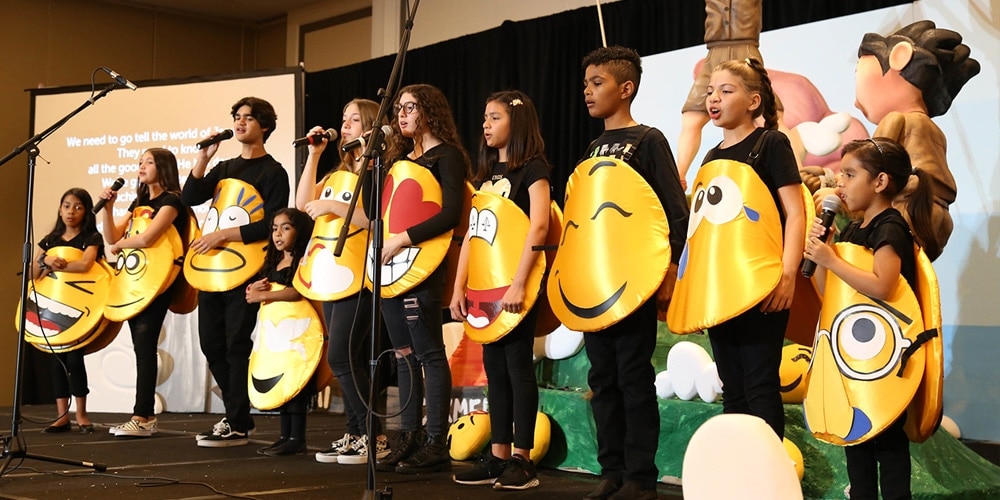 Dozens of regional leaders celebrated the success of IAD’s most comprehensive evangelism initiative, called The Talking Backpack, which allows children and adolescents to earn patches and pins as they study and learn character-building traits every month through various activities at local churches as well as Adventist schools throughout the territory.

At the meetings, leaders introduced new materials and resources dedicated to helping children and adolescents become disciple-makers across the IAD during a year in which the Adventist world church commemorates the 25th anniversary of the establishment of children’s ministries.

“Our main goal is to ensure that every child and adolescent throughout Inter-America is cared for through the different initiatives and activities that we have been called by God to do,” said Dinorah Rivera, children and adolescents ministries director for IAD. “It is because of your dedication and love for this ministry that so many children and adolescents have witnessed for Jesus and expanded God’s kingdom.”

Rivera announced that the third edition of The Talking Backpack would focus on the Beatitudes in the Sermon on the Mount, found in Matthew 5 in the Bible. Rivera unveiled some of the new resources that are available in English, Spanish, and French, including a manual, animated videos, activity workbooks, face emojis, pins, and patches that will be part of this year’s focus. The year will also see children and adolescents equipped to lead in small group ministries with their peers.

“God chose us to be His disciples so we can be like Him in the way we love others, in the way we treat children,” Koh said. “With our weaknesses, with our strengths, He has chosen us to be children’s leaders. We are called to impact those lives.”

Edith Ruiz, children and adolescents ministries director for the Southeast Mexican Union, said the character traits based on the Beatitudes, like being humble, joyful, a peacemaker, and more, will provide the right tools to follow up the success in 2019 of The Talking Backpack. More than 25,000 children in the seven regional fields she oversees got involved in the monthly program all across local churches last year, Ruiz said. Hundreds of children were baptized as part of The Talking Backpack initiative, she added.

Ruiz began this year’s backpack initiative already with the help of many leaders in the territory. It’s an effort that involves monthly meetings and training to move forward together, ministering to children and adolescents for this year’s impact, she said.

“Every Sabbath, churches present a special video spot during church service, shedding more light on the activities and programs that are part of the character building and discipleship ministry for children and adolescents,” Ruiz said. Children have their lessons on the special app and are being trained to lead in small groups to reach their peers in their neighborhoods and communities.

Raquel Medina, children and adolescents ministries for the Adventist Church in East Venezuela, said the goal for this year is to reach more than 10,000 children with the character-building traits that The Talking Backpack is focusing on. She said she is sure hundreds of leaders spread out across the eight regional conferences will double their committed efforts to train more children and adolescents. More than 7,500 took part in the initiative in 2018, and more than 8,500 in 2019.

“We expanded the program to not only use it across our churches and Adventist schools, but many other non-Adventist school teachers and leaders sought us out to implement it in their schools too,” Medina said.

Medina shared that this year’s effort was launched on January 25 all across Adventist congregations in Caracas and other cities comprising the East Venezuela Union, with a special communion service titled “Let’s have supper with Jesus.”

“All our leaders are so excited because the program this year continues to be so spiritual and has a mission focus as well. We are challenged and blessed to be part of such great work with the children,” Medina said.

Principal of Ace Academy South Lizzbeth Ixchu, who specializes in strategies to help parents improve their children’s behavior in promoting desirable attitudes and managing misbehavior, provided tools to help the delegation of children and adolescents leaders in their ministry.

“We have to be radical in our teaching of what the Lord says in the Word of God,” Ixchu said. “The role of the parent-teacher relationship will change, but we need to strive to continue that positive education, reaching the physical, emotional, and intellectual needs of children, including those with special needs,” she said.