The Story Behind the Song 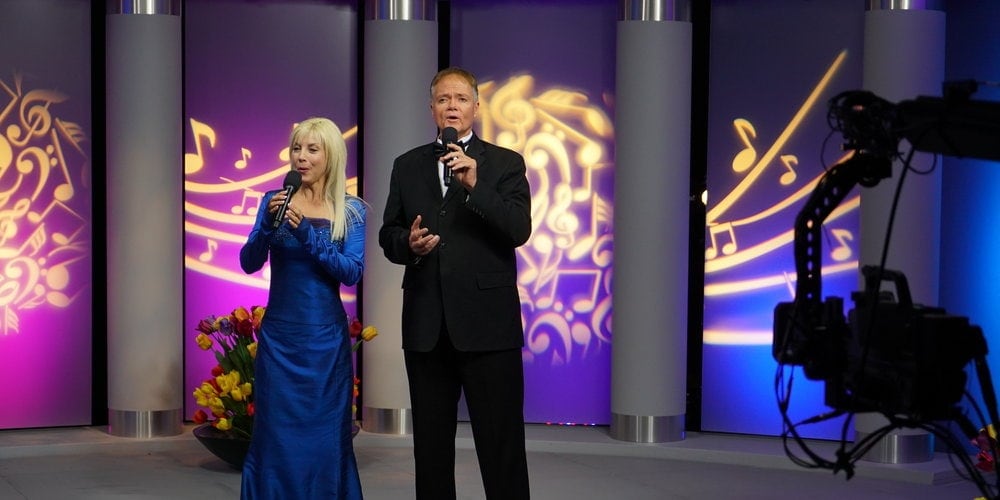 Pierre and Anina have just spent an entire day on the set of “My Story, My Song: Interlude With Kandus Thorp” in the Hope Channel studio.

It went well, but they looked relieved that the day is over. Performing is hard work.

As Pierre relaxed into his chair, I asked what he appreciated most about having grown up in a musical family.

“It’s wonderful to think back on all of us standing around the piano, singing the Sabbath in with hymns,” he said, referring to his parents and five talented siblings.

“No, I never thought of making music my career,” he said. “I only wanted to sing for the Lord. I think that losing my mother in childhood made me quite serious about life and earnest in my faith. Besides, I knew that I would not be able to perform on Sabbaths.”

Pierre van der Westhuizen’s talent was recognized in 1980 by renowned Adventist music teacher and choir director Wilhelmina Dunbar at Helderberg College in South Africa. She enrolled him for every eisteddfod possible, and after that declared that he would simply need to “continue singing in heaven one day.” She understood that it was not easy for Adventist artists.

After Helderberg, Pierre studied voice under Eric Muller at the opera school in Pretoria, South Africa. He had to discontinue the course because he could not join in with performances on Sabbaths. He remembered being offered a role in “Salomé” and, upon turning it down because of the Sabbath, having Mimi Coertse, a South African opera icon, admonish him: “Pierre, the Lord has given you a talent. You must use it!’”

“But I didn’t feel comfortable forwarding my own interests on the Sabbaths like that,” Pierre said.

It was at this opera school that Pierre first met classmate Anina Wasserman, who was studying under Emma Renzi, a South African musician who’d had a long career in Italy.

Anina grew up with a mother who was the music leader (organ and choir) in a Dutch Reformed congregation in South Africa. Anina often sang the solo parts in the children’s choir.

Despite her diversity of talents, Anina said it was a natural next step for her to study voice and become a professional musician. Looking back she saw what a perfectionist she has been — exacting and satisfied with only the best from herself. In this way, her very successful opera career was launched at the tender age of 19.

“It can be tricky being a performer,” she said. “There is no representative body for agents in South Africa, so if you have any complaints, you’re on your own.”

Once, after not being selected for a part promised to her, she was disappointed and asked the Lord why he had allowed people to treat her so unfairly. It turned out that the chosen performer became ill after the opening night, and they called Anina in. She had to master the whole opera, music and “regie” (dramatic direction), in two days. She did so well in the performance that two audience members offered to send her, all expenses paid, to complete her vocal training in Italy.

There she studied under Franco Correlli, Carlo Bergonzi, and Luciana Serra for two years before returning to the opera scene in South Africa. She said she felt that was a true gift from God.

But Anina had a growing feeling that something was missing.

“In 2001, I was busy with “Lucia di Lammermoor” by Donizetti when I really felt the Lord’s voice urging me to lay down ambition and the self-centered use of my talent. I felt the need to give glory to His name,” Anina said. “You know, music is so powerful — more than the spoken word which we filter rather critically through our intellect. Music takes the message straight to the heart and can make a huge spiritual impact.”

Over the years, Pierre had busied himself in a successful family business in graphic design and sang mostly in church or for evangelistic campaigns. He sang on and off with a quartet that had actually formed during his school days at the Adventist Sedhaven High School in Johannesburg.

“I even cut a vinyl record and put out some cassette tapes,” Pierre said with a laugh.

He shared that he went through a period of personal discouragement and a sense of loneliness in the church. He felt that “church” was not helping to create a focus on Jesus. He stopped attending church regularly for about 10 years, and although he tried to worship in other churches, he couldn’t reconcile himself with anything other than Adventist doctrines.

Around 2005 he experienced a spiritual rebirth and realized that his attitude had changed from “what can the church do for me” to “what can I do for my church,” he said. He was spiritually on fire and fully committed to using his talent for the Lord.

“Our quartet, Melody Four, started up again and I recorded some CDs,” he said.

He also traveled abroad with evangelists to New Zealand and Russia with a “Share Him” campaign by Robert Folkenberg Sr. in 2008. It was June, and with late summer sunsets, when a Russian pastor named Yevgeny took the visitors on home visitations after the evening meetings. In one instance, a young crippled woman began to feel sensation in her legs as Pierre sang. She stood up and walked with the help of others because her muscles were still weak. A week later, they saw her at church. She’d left her wheelchair outside and walked in, still with help, but with evident progress.

In 2010, after Pierre had been commissioned to sing at the General Conference Session in Atlanta, Georgia, he bumped into Anina online. He’d known of her progress over the years, but now she was particularly interested in talking about spiritual things. She felt that the Lord was speaking to her about keeping the Sabbath through Isaiah 58:13-15 but wasn’t sure what to do. Pierre was able to put her in touch with a local Adventist church in Pretoria. She also gave voice lessons to one of the church leaders in the region, and he urged her to take the next step and get baptized.

Since then, Pierre and Anina have teamed up in a musical ministry, starting with a campaign by evangelist John Carter in Johannesburg in November 2010. A few days ago, they spent the day at the Hope Channel studios in Silver Spring, Maryland, for the concert series of “My Story, My Song.” The concert will be broadcast in the coming days and can be viewed on Hope Channel’s website, hopetv.org.

“We are pleading with the Lord for the privilege to continue ministering in song to the people of the world through the Adventist Church,” Pierre said. “We are open to his guidance, and fully dependent on His grace. We look forward to joining the redeemed in the heavenly choir someday soon in a great and joyful anthem of praise.”