“The God of Our Ancestors, the One I Serve” 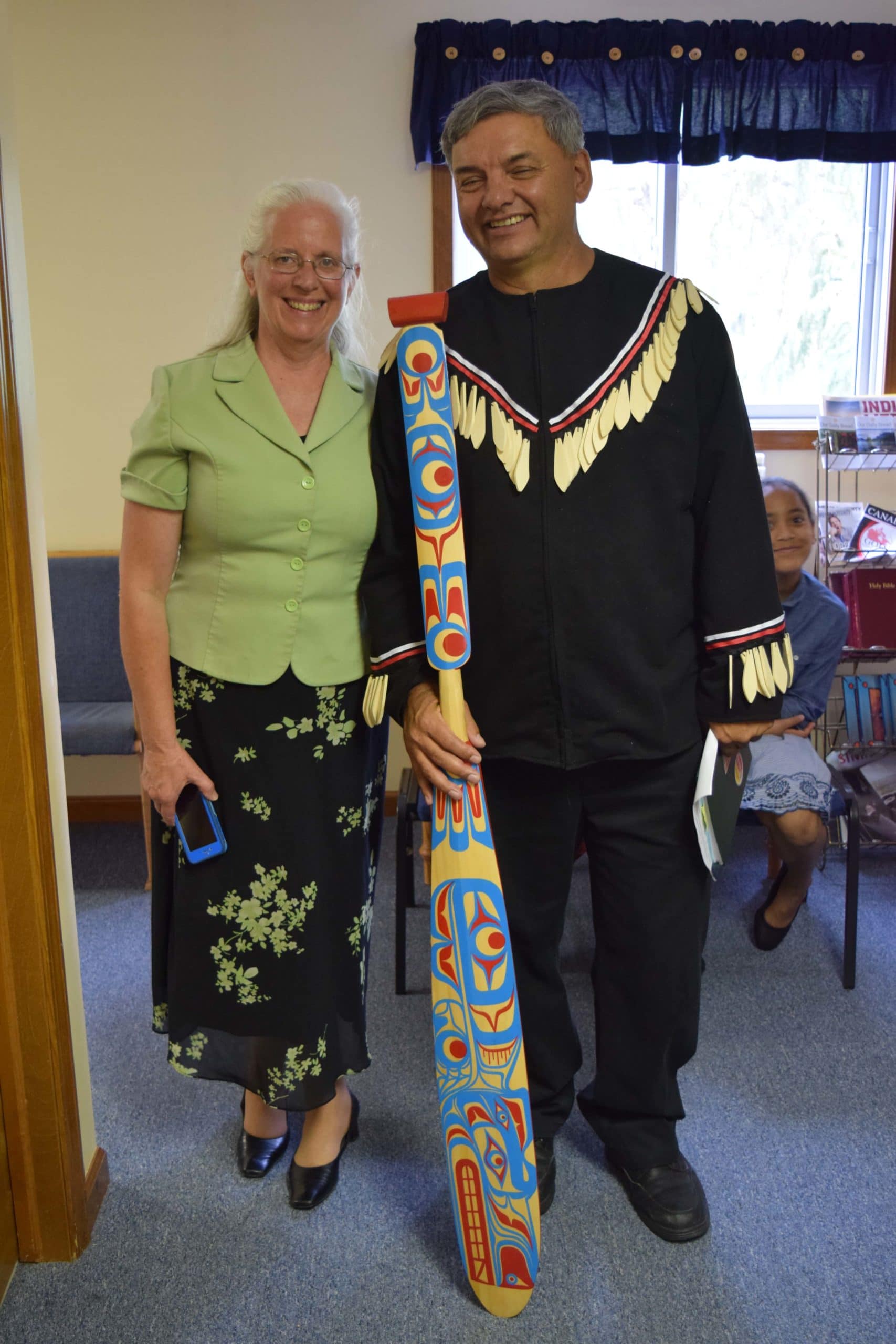 August 9 is the International Day of the World’s Indigenous Peoples. According to the United Nations, there are approximately 370 million indigenous people in the world, living in 90 countries. They speak a majority of the world’s 7,000 languages and make up about 5,000 individual cultures. Indigenous people adhere to cultural traditions that are, at times, vastly different from the dominant societies surrounding them. Recognizing this, Adventist missionaries are increasingly learning how to share the Gospel message in those unique cultural settings, as is the case in Northern Canada. ~ Adventist Review Editors

Pastor Randy Elliott brings his cell phone and shows his visitors some images of his first painting on a deer hide.

“It is beautiful,” a lady says. “Where is it? Where is it hanging?”

“No, it was my first painting on a hide,” he answers.

“But where did you put it? Where is it hanging?” the visiting lady asks again, not sure Elliott understood her question.

After a few, awkward seconds, Elliott explains himself.

“You never keep your first of something for yourself,” he says. “You give it away. Only on your second try you can keep it.”

Elliott has recently moved from the province of British Columbia, on Canada’s west coast, to minister in Sioux Lookout, in Northern Ontario, 2,000 miles (3,200 kilometers) to the East. Visitors to his home have come “from the South”—that is to say, from the Greater Toronto Area—for the official launch of the Sioux Lookout Seventh-day Adventist Group, on July 29.

But as a church pastor, Elliott, a Native himself, has not only studied Adventist doctrine and church administration. An experienced trauma counselor, he knows first-hand many of the intricacies and nuances of working with Canada’s First Nations. The “deer hide” exchange is just one example, but there are many more.

Adventist leaders in the region believe Elliott could be an invaluable asset to lead outreach and evangelistic initiatives in the North.

“Every spiritual conversation starts with nature,” says Elliott. “Natives have a very strong bond with the natural world.”

Elliott loves discussing creation and the Creator every time he sees an opening to do so.

“I tell them, ‘The God of our ancestors, the One I serve, is who created all this beauty,’” he says.

At the same time, nature can become dangerous, as wild animals such as bears and especially wolves lurk in the area. It is a powerful reminder—even for him—of the results of sin and the tangible reality of the great controversy.

Nature can be beautiful, but in its present state, it can kill you

“Nature can be beautiful, but in its present state, it can kill you,” he says.

A Native approach to Sabbath requires discussing its importance for fellowship. “For Natives, Sabbath is not so much the notion of rest as of gathering, as you meet with your band to enjoy fellowship,” Elliott says.

Other teachings from the Bible are more difficult to adapt to an indigenous mindset. The notion of the second coming of Jesus is one of them.

“How can Someone come back for us, if we never met Him in the first place?” many Natives wonder.

Some of the values of indigenous peoples in Canada can even challenge the church’s regular way of doing business.

Take pastoral districts and placements, for instance. Natives, many of whom live in reservations, value people who stay onsite, and distrust someone that stops by just to leave soon later.

“You don’t trust a person who leaves,” says Elliott. “It can be overwhelming, because in their thinking, if you care for them, you are supposed to stay. If you go, they mourn your departure.”

But there are some silver linings too.

“Many Native communities have the notion of the holy man who can communicate and hear God,” says Elliott. “It is the reason why an invitation to pray for them is no small thing.”

Elliott seizes every opportunity he is given to pray for other people. As he does, he is aware not only of the power of prayer but also of the importance of the moment.

“Before their eyes, you are an intercessor, someone who is telling them a message right from God,” he says.

In Canada, outreach to Natives has experienced numerous roadblocks along the years. Besides the impressive vastness of the territory, Christianity is historically seen, in many cases, as a symbol of colonial oppression and opposition to a Native way of life. And according to census documents, there are around 600 First Nations governments or bands in Canada, many of them with a distinctive culture, language, art, and music.

In some regions, Adventist churches were slow to embrace the challenge of working with the indigenous peoples of Canada. But this is changing, believes Ed Dunn, a Native pastor who is Native Ministries Coordinator for the Seventh-day Adventist Church in Canada and lives on a reservation in the province of Alberta.

“More and more churches are inviting me to train them to learn how to share Jesus’ love with Canada’s First Nations,” says Dunn. “The increased awareness and interest are encouraging.”

Sioux Lookout Adventist Group first elder Nick Rhone sees it as a matter of sharing Jesus’ love with no strings attached. “It is about showing compassion, doing good to others without an agenda,” he says.

Rhone, a rare combination of trained theologian, police officer, and commissioned officer in the military, is working with teenagers living on the reservations to teach them life skills and prevent them from falling into a life of vices and crime.

“The Lord is working in the North,” Rhone says. “He has brought things together that no man can get credit for. We praise Him for that.”

The Faith-Full Life
Our Place in the Garden
The Master Gardener has planted each of us to serve a specific purpose and play a unique part in making our communities shine.