Postmodernism: A Great Opportunity for Witnessing 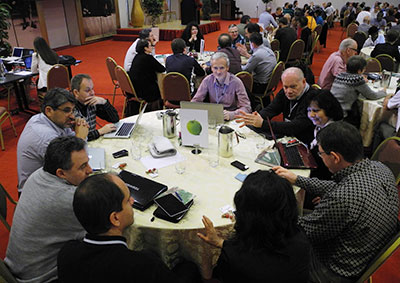 “GO BEYOND NORMAL: Making God Known In Europe.” This was the theme of a three-day conference on secularism and postmodernism that convened at the Hotel Splendid, Bečići, Montenegro, Nov 12-14, 2013.

Postmodernism offers us a great opportunity for witnessing. This is the message I come away with from the conference held in this small Balkan country and featuring over two dozen brilliantly conceived presentations by thinkers who find hope in the midst of considerable challenge.

According to Miroslav Pujić, Director of the Ministry to Postmoderns at the Trans-European Division headquartered in the UK, and organizer of this conference, the Lord has given us a great opportunity to reach out to a generation that is disillusioned with the institution of religion, but that is seeking for meaning in life, and is open to hearing “story”: His story, our story, my story, or any story as long as it is personal and disseminated through authentic relationship or the means of modern technology.

The conference spoke to three principal themes: “Culture, Essence, Praxis.” “Culture,” the first of these, considered the rejection of absolute truths, and coercion (man is the center of all things) “Essence” examined the why of postmodernism, and what it is made of (the failure of modernist institutions such as organized religion and ideologies). Under “Praxis” attendees discussed how we communicate in a postmodern culture.

According to John Surridge, who attended as President of the Welsh Mission, “One of the things we recognize is we have to be honest, to recognize that there is a long way to go with many of our congregations. But there are a lot of individual strategies that we can try even now; for example, a less formal style of worship; making outsiders, post-modern people, feel more at home; taking our ministry out into the community rather than trying to make our churches the centers of community; for example, having Bible studies in the café.”

Anne-May Müller, a pastor in Denmark, added that “it has been challenging, because it changes the way we are looking at things, the way we are doing church. And it emphasizes the need for us to rethink the methods that we are using. It is very important that the church be relevant in the culture that the church is in. Our culture is very secular and very post-modern and the church must learn how to reach out to people in the culture that we’re actually in.”

Ted Wilson, president of the General Conference, attended the conference, not as a speaker, but as an interested participant. He said that “there were a lot of things that pushed everyone’s thinking. Everyone has to probably contextualize what we have heard here to their own setting. I would hope that people will not make reaching post moderns or anyone too complicated. Because it really requires a very relational and proactive approach to actually just get out and try to befriend people. I’m that from this conference people will take some very practical methods that will be simple in their approach.”

Raafat Kamal, assistant to the president of the Trans-European Division, and one of the organizers, shared his hope that rather than wait 5 or 6 years to have a conference like this one again, this could be done every two years to “keep this on our radar and bring some new elements to the discussion.”

To quote Pujic again, “we probably don’t have much time to take advantage of the window of opportunity the Lord has given us to reach this generation. For the next shift is already under way. It is fundamentalism.”