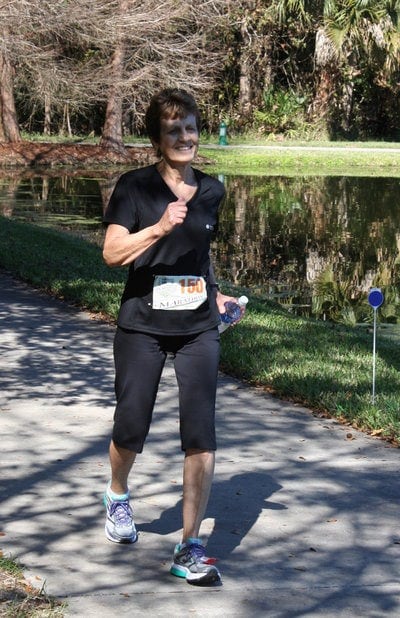 Ernestine Finley, wife of evangelist Mark Finley, completed her first marathon at the age of 70 on Sunday, placing third in her age group and raising tens of thousands of dollars for an evangelism center that she and her husband are building.

Finley, known to many as “Teenie,” ran the 26-mile (42-kilometer) route in Celebration, Florida, in just over six hours, crossing the finish line a half hour earlier than she had planned and well within the seven-hour limit to qualify for a medal.

“My energy level throughout the race was strong,” Finley said. “I know God was with me each step of the way.”

Finley, author of the popular cookbook Natural Lifestyle Cooking and a health lecturer at her husband’s evangelistic meetings, decided to run her first marathon after reading an article in the Adventist Review last July about an 82-year-old man who had completed 237 marathons since the age of 62.

Finley started the arduous training for the Jan. 25 race with three goals: to improve her health, to encourage other people to discipline themselves into achieving better health, and to raise $100,000 toward the construction of the $4 million Life Hope church and evangelism center in Haymarket, Virgina, where she and her husband live.

With the marathon, Finley raised $54,843 from 53 donations on the fundraising website givingzone.com. Mark Finley said people were also sending marathon donations via the General Conference, and it would take a few weeks to tally the total.

“We are extremely thankful for those who have contributed to this project and are deeply grateful for their confidence that God is moving to do something special in the Haymarket area,” said Finley, editor-at-large for the Adventist Review.

About $3.5 million was raised before the marathon, mostly from private donors, and Finley said he trusted God would bring in the rest of the money so construction could start as planned in March.

Read more about the evangelism center

It wasn’t immediately clear who won an offer by the Finleys to host a spiritual weekend retreat at the home church of the donor who came the closest to guessing Teenie Finley’s finish time.

“Our day has been so full that we have not sorted out the closest times and we leave for Andrews University in the morning, so we will figure this out in the coming days and contact the appropriate people,” Mark Finley said.

Teenie Finley had trained to finish the race in six and a half hours. The Finleys woke up at 4:40 a.m. Sunday and arrived at the marathon site around 5:30 a.m. The morning weather was chilly, with the temperature in the high 40s Fahrenheit (around 10 degrees Celsius), before warming up to the comfortable 60s F (15-20 C) with a nearly cloudless sky. Teenie Finley joined about 2,500 other runners for the 7 a.m. start.

“Early in the morning, we prayed that God would give her extra energy,” Mark Finley said. “She quoted a promise in Isaiah 40:31: ‘But those who wait upon the Lord shall renew their strength; they shall mount up with wings like eagles. They shall run and not be weary. They shall walk and not faint.’ Faithful to His Word, God gave her amazing energy throughout the day.”

Teenie Finley ran the first 13.1 miles in 2 hours, 38 minutes, and she completed the race in 6 hours, 2 minutes, and 4 seconds, placing 446th overall. The first-place winner, Adriano Bastos, of São Paulo, Brazil, finished in 2 hour, 42 minutes, and 46 seconds, according to results published on the marathon’s website.

“Scores of people were amazed at a 70-year-old woman running her first marathon in such good physical condition,” Mark Finley said. “Her prayer always has been, ‘Lord I want to do this for your glory.’”

Shortly before the race began, Peter Landless, director of the General Conference’s Health Ministries department, called to pray with Teenie Finley and told her a story that lifted her spirits throughout the race:

A small boy was running a long-distance race. He ran and ran and soon became tired. But he kept pushing on, with his little legs pumping and his mouth moving as if he were talking to somebody.

When he finished the race, he was asked, “Who were you talking to?”

The little boy said: “I was talking to God. I was praying.”

“Well son, what were you praying?”

Mark Finley said: “Throughout the race Teenie prayed, ‘Lord you lift these legs of mine up and I will put them down.” And He did.” 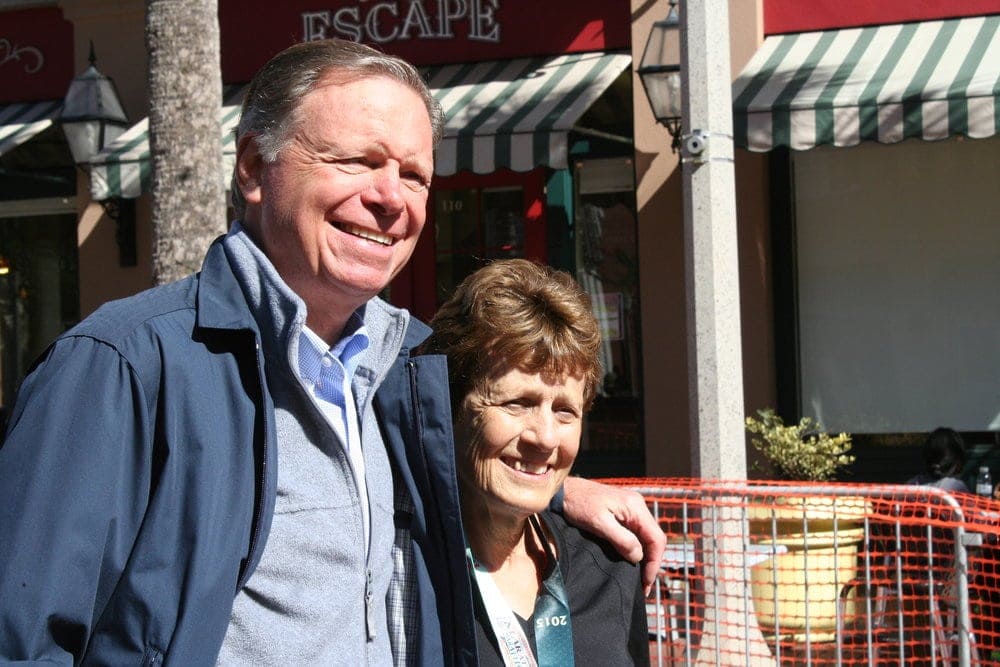