Ted Wilson Addresses Questions on the Campus of Andrews University 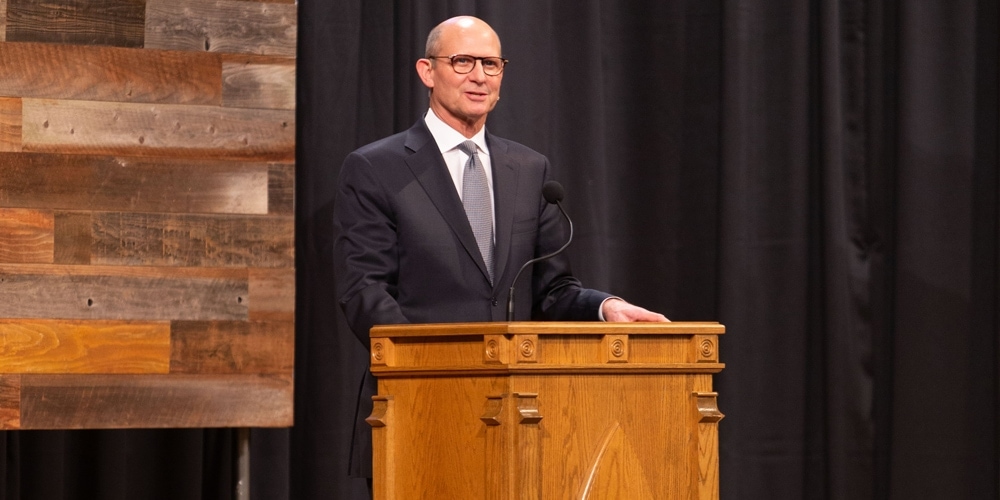 Leading up to the Andrews University board meetings in Berrien Springs, Michigan, this week, university president Andrea Luxton and Ted N. C. Wilson, president of the Seventh-day Adventist Church, engaged in an hour-long conversation featuring questions covering a wide array of topics of interest in the church today. The conversation was part of an afternoon program held March 2, 2019, in Pioneer Memorial Church.

Many questions had been submitted to Andrews University for the afternoon event, including questions on women in ministry, church structure, racial and societal issues, the Trinity, and more.

Opening the two-hour program, Luxton explained the first hour would focus on mission, followed by questions and answers. In his opening remarks, Wilson said the meeting “was a good opportunity to share from our hearts,” and encouraged all to “focus on the mission of the church,” with “everybody doing something for Jesus.”

A short video from the Novosibirsk Seventh-day Adventist Church in Siberia, Russia, was shown, featuring several young adults involved in community outreach and mission. Artur Stele, a vice-president at the church world headquarters and chair of the Andrews University board, explained the International Bible and Mission Conferences — a program that encourages pastors worldwide. Wilson then spoke about recent meetings held in Jamaica, emphasizing Mission to the Cities, Comprehensive Health Ministry, and the effectiveness of healthy lifestyle programs.

Tara Vang, a young adult working at a Life Hope Center in Fresno, California, shared her powerful story of growing up as a refugee from Laos, and how God led her from social activism into becoming an “advocate for the Lord.”

Following up on Tara’s testimony, Jim Howard, associate director of the Sabbath School and Personal Ministries department at the world headquarters, encouraged everyone to develop a personal relationship with God, to become involved with a local church through the “ministry of attendance,” and to study the Bible “for ourselves and with others. It’s not enough to have mission without the message!” he said.

Introducing the second part of the program, Luxton explained how she and her colleague, Stephen Payne, special assistant to the president for university and public affairs, selected questions from the many submissions.

“It was very clear there were a lot of passionate questions,” Luxton said. “We’ve tried to go through those and group them according to the topics that people are interested in. . . . We hope that we have been true to the questions and concerns that you have. . . . We will be dealing with questions such as mission, young people in the church, women in the church, unity in the church, the Trinity, and all kinds of other interesting topics.”

Luxton began by asking Wilson about his time as a graduate student at Andrews. “If you were to choose one thing that Andrews University gave you that has helped you since then in your leadership and in your ministry, what would that one thing be? And . . . what would one thing be that you would hope students would take away from here?”

“Andrews University has played a very critical role in my life,” Wilson responded. “I suppose one of the biggest areas of impact was the opportunity to be a student under extremely fine teachers. People who were not only experts in their field of specialty, but took time to talk to me, to encourage me, to correct me. . . . If we look to the future and what a student can take away from Andrews University, I would say that those of you who touch the lives of students . . . if you take a very special interest in people it will be a marvelous opportunity. Something that will truly be a blessing.”

On the topic of discrimination andsocietal issues, Wilson stated, “Everyone should be treated with great respect, and fairly. That’s what Jesus did. That’s what He wants us to do. . . . Seventh-day Adventists should be foremost in trying to help people who are in need . . . but all of that needs to be done in the context of the gospel. And the ultimate goal is not simply to right wrongs from a societal setting, because . . . the world is not getting better. . . . It’s not getting better until people meet Jesus. Then Jesus can change you . . . and you can reach out and you can help people.” Citing Matthew 25 as an example, Wilson added, “That, to me, is truly an understanding of how we ought to relate to the needs of the world, but with a view of leading people to the foot of the cross.”

In addressing the LGBTQIA movement, Wilson stated, “When we look at the situations people find themselves in, we need to respect them. We need to understand where they’ve come from. We need to ask God to help us know how best to be of service to people. But, that [LGBTQIA] is a particular societal trend that is completely in opposition to this Book [the Bible]. And it doesn’t mean that this book doesn’t also talk about aberrant, errant, heterosexual activity — it does. Whatever leads you away from what God’s Word says is something you want to avoid, but you want to help those who need to find restoration in Christ. So, I want to urge everyone to go back to the Word. And the Word will truly help us find ways in which to relate to people who might feel discriminated against.”

As the discussion continued through other topics—abortion, women in ministry, unity, diversity, relevancy and more—upholding the truths taught in the Bible was a central theme to which Wilson repeatedly returned.

Responding to a question on the Trinity, Wilson referred to the Scriptures and the writings of Ellen White as he affirmed, “God the Father, God the Son, and God the Holy Spirit have been together from eternity and will be together through eternity. . . . They work in complete harmony . . . they are the Godhead. They cannot work in opposition to each other. Yes, they have specific roles, but they work in perfect unity and harmony.”

In response to Luxton’s final question, “How do we move forward as a church?” Wilson answered, “That’s a great question, and I don’t have the complete answer, except to say that I personally lean on the Lord all the time, as much as I can, and that’s what gets me through a lot of things. I don’t worry about a lot of criticism anymore. It’s not about me. It’s about how we can prosper God’s precious last-day message, which is entrusted into our hands. . . . I think we need to lift the vision of why we are here. And I would say one of the greatest challenges we have is, first of all, a lack of confidence in God’s Word [the Bible], as opposed to what somebody told you on the internet, [and] a lack of understanding of the urgency of the hour.

“I believe we are very close to when those things can happen rapidly at the end to bring us to a very final approach to this world. And I think the sense of urgency has to be placed in the hearts of people. And the only way you can do that — you can’t force it, you can’t legislate it —is for each of us to point people to God’s complete truth [the Bible] and just say, ‘Make it your studied effort to understand why we’re here and what your role is in all of this.’ In the concept of that, if people truly are wanting to do that, I believe, as the Bible says, that the Holy Spirit will lead us into all truth.

“It’s going to be allowing the Holy Spirit to take control of this church worldwide with over 21 million members, including many young people, and many diverse ethnic groups — everybody understanding we’re part of a last-day mission. And if we do that, I believe we can find our way through some of these differences, because the real mission will loom large.

“Differences will be lost sight of as we come closer to Christ and His true mission for us. Now that may sound like, ‘Yeah, that’s a nice way to just say it, and a pat answer,’ but I truly believe it.”

To watch the entire program, go to https://beinformed.adventist.org/2019/03/07/president-ted-wilson-answers-questions/