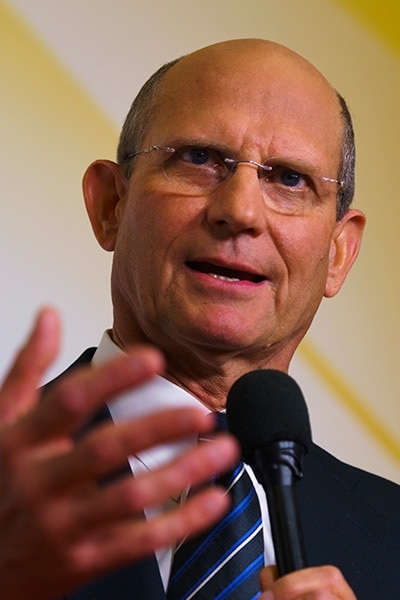 Wilson and his wife, Nancy, entered the stage to sustained applause from standing delegates and thousands of other church members in the Alamodome stadium.

“It is with very quiet respect and humility that both of us stand before you, before God,” Wilson said. “And we do accept this responsibility.”

Wilson reiterated his commitment to God and the Adventist Church and briefly outlined three goals that he would pursue in his second term: a greater emphasis on Christ and His righteousness, faithfulness, and the involvement of every church member in evangelism and witnessing.

“God intends for His people to stand faithfully, but we have got to do it together,” he said.

Wilson’s election was briefly delayed after two delegates proposed returning his candidacy to the Nominating Committee for further discussion and several other delegates called for a secret ballot on Wilson’s election. Both motions failed to gain traction.

A general vote was called on a motion from several North American Division delegates to hold a secret ballot, but this motion was also turned down.

Wilson’s reelection appeared to have gained strong support from many quarters. Members of the Nominating Committee, which was chosen late Thursday and worked both Thursday night and Friday morning to nominate a president, overwhelmingly backed Wilson, according to a person familiar with the closed-door talks.

Wilson, speaking at a 15-minute news conference immediately after his reelection, said he would seek unity in the church by emphasizing spiritual aspects of prayer and how God brings people together through mission. This focus, he said, would help fulfill Jesus’ prayer in John 17: “I do not pray for these alone, but also for those who will believe in Me through their word;that they all may be one, as You, Father, are in Me, and I in You; that they also may be one in Us, that the world may believe that You sent Me” (verses 20, 21, NKJV).

Asked by the Adventist Review to identify his top priority going forward, Wilson pointed to the three goals that he had mentioned on the session platform but said that he anticipated putting the greatest energy into the third goal: getting every church member involved in evangelism and witnessing.

“We will emphasize the very core of who we are as Seventh-day Adventists,” he said.

Chad Stuart, a United States pastor blogging for Adventist Review, asked Wilson to describe his mood after his re-election. Wilson replied that he felt “humbled and overwhelmed,” adding that the election process had been “interesting.”

His wife, Nancy, was praying in the General Conference’s prayer room when she learned that her husband had been nominated for a new term.

“I kind of feel the same way I felt five years ago. It’s overwhelming,” she said in an interview. Her voice wavered and tears welled up in her eyes as she spoke backstage in the Alamodome.

Ted Wilson, both at the news conference and on the session platform, thanked church members for praying for him and said he believed those prayers sustained him day to day.

“We want to see Jesus come,” he said. “This precious church was established by God Himself.”

Delegates, speaking about their hopes for the church during Wilson’s new term, voiced a similar desire to see Jesus’ return.

“I want to see the Lord come in the next five years,” said Homer Trecartin, chair of the Nominating Committee and president of the church’s Middle East and North African Union Mission.

“We need to focus on mission,” he said. There are “very unentered areas of the world that need to hear the gospel.”

Richard Hart, vice chair of the Nominating Committee, said his main hope for the church was that it would “stay unified with continued diversification both with gender and race around the world.”

“My prayer for the church is one for unity of purpose rather than uniformity of action,” said Cheryl Doss, assistant secretary of the Nominating Committee and director of the church’s Institute of World Mission.

Priscilla Christo, a delegate from the Southern Asia Division, said she would like to see young people receive more recognition and church leaders put more emphasis on helping the youth.

Joel Ubani, president of the Aba East Conference in Nigeria and a delegate with the West-Central Africa Division, said Wilson had visited many young people and churches in his region during his first term and helped achieve much progress.

“We believe that with God the church will experience tremendous growth in the next five years,” he said.

Judith Fisher, a General Conference delegate, said she hoped that “as a church we become a lot more intentional.”

“Meeting God where He is, where He wants us to be, and to be able to hasten His second coming, this is what we’re all here about,” she said.

“My hope and dream is that the gospel will be spread farther and wider, and then the Lord will come,” he said. “With the gospel being spread more widely and in different places, and with what’s happening in the political and natural world, it seems His coming will be soon. It’s not far-fetched.”