Tears and Hugs at Mass Baptism in Nicaragua 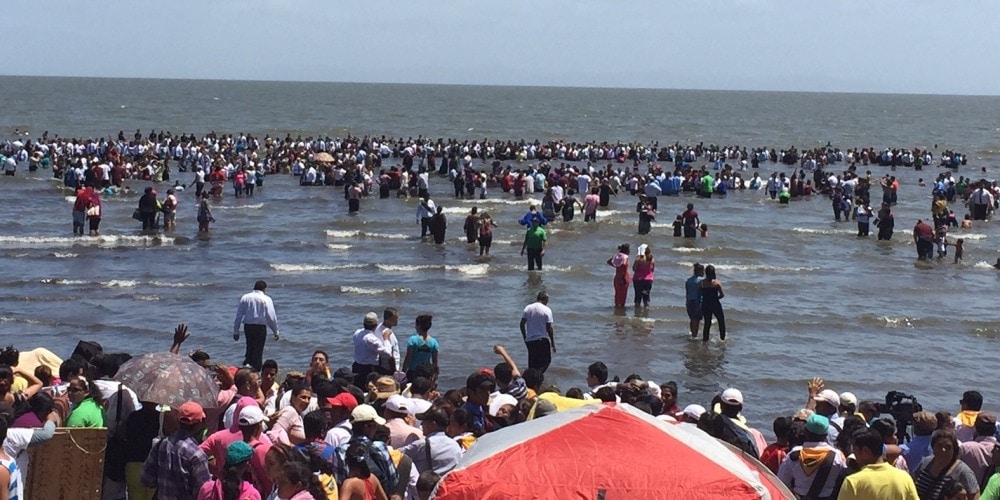 Thousands of people, many hugging each other and weeping with joy, thronged around a vast lake for a mass baptism last weekend that concluded the Adventist Church’s first major evangelistic series in Nicaragua.

Dozens of pastors wearing white shirts and ties baptized 1,884 people in the rippling waters of Lake Nicaragua on Sunday. Another 200 people who could not make it to the lake were baptized in local churches, bringing the total number of nationwide baptisms since October to 12,000.

"May this baptism bless our waters," Julia Mena, mayor of the nearby city of Granada, told the crowd.

Ted N.C. Wilson, president of the Adventist world church, who witnessed Sunday’s baptisms from the sandy shore with a group of church leaders and Granada's mayor, said it was a thrilling sight.

“It was a privilege to be present at such an impressive scene, with young people standing in the lake, holding hands as a human shield to make sure people did not venture too far, and to see the scores of pastors participating in the baptism,” he told the Adventist Review.

Dozens of weddings also took place on the shore. Many Nicaraguans live in common-law marriages and have children, but they never legally tie the knot. So lawyers donated their time to come to the lake and marry those people in civil ceremonies before they were baptized. Under Nicaraguan law, a couple cannot be legally married by a pastor.

Among the people baptized was a woman whose son, an Adventist pastor, had prayed for her to accept Jesus for 15 years, church leaders said. The mother, in her 50s, made her decision at the lake and frantically began to search the crowd for her son so she could seal her commitment that day. Her son began crying when he heard the news, and the pair hugged tightly, not wanting to let the other go. The son later baptized his mother.

Read related story: "Over 2,000 Will Be Baptized in Lake Nicaragua This Weekend"

Sunday’s baptisms capped a yearlong evangelistic effort that began with the establishment of about 5,000 small groups that studied healthy lifestyles in Nicaragua and neighboring Costa Rica. The groups later began to study the Bible, and participants were invited to attend evangelistic meetings throughout the region. Evangelist Mark Finley arrived in Nicaragua last week to wrap up the initiative with four days of meetings to nightly crowds of more than 3,000 people in Managua, the country’s capital.

The Adventist Church had 203,698 members in the South Central American Union Mission, which comprises Nicaragua and Costa Rica, at the end of 2014.

Finley praised the commitment of Nicaraguan Adventists in sharing Jesus with others.

“In Nicaragua evangelism is not an event, it is a way of life,” he said Monday. “Our church has truly grasped the concept that the question is not simply how many people do we bring into the church. It is how many members do we send out equipped and trained to impact their communities for Christ.”

Finley said local administrators and church members were dedicated to the mission of the church, and their enthusiasm rubbed off on the people who attended his meetings.

“When public transportation did not run last Friday night, scores walked to the meetings,” he said. “One of our elders rented six taxis at great personal expense to bring Bible study interests to the meetings. Others took buses all night to attend our baptism Sunday.

“What mattered to so many of these Adventist believers was the salvation of their family, friends, neighbors, and working associates, and they were willing to make personal sacrifices to accomplish that dream. I leave Nicaragua inspired and challenged with the faith of our entire membership.”