Teachers’ Convention Closes with Rededication to the Calling 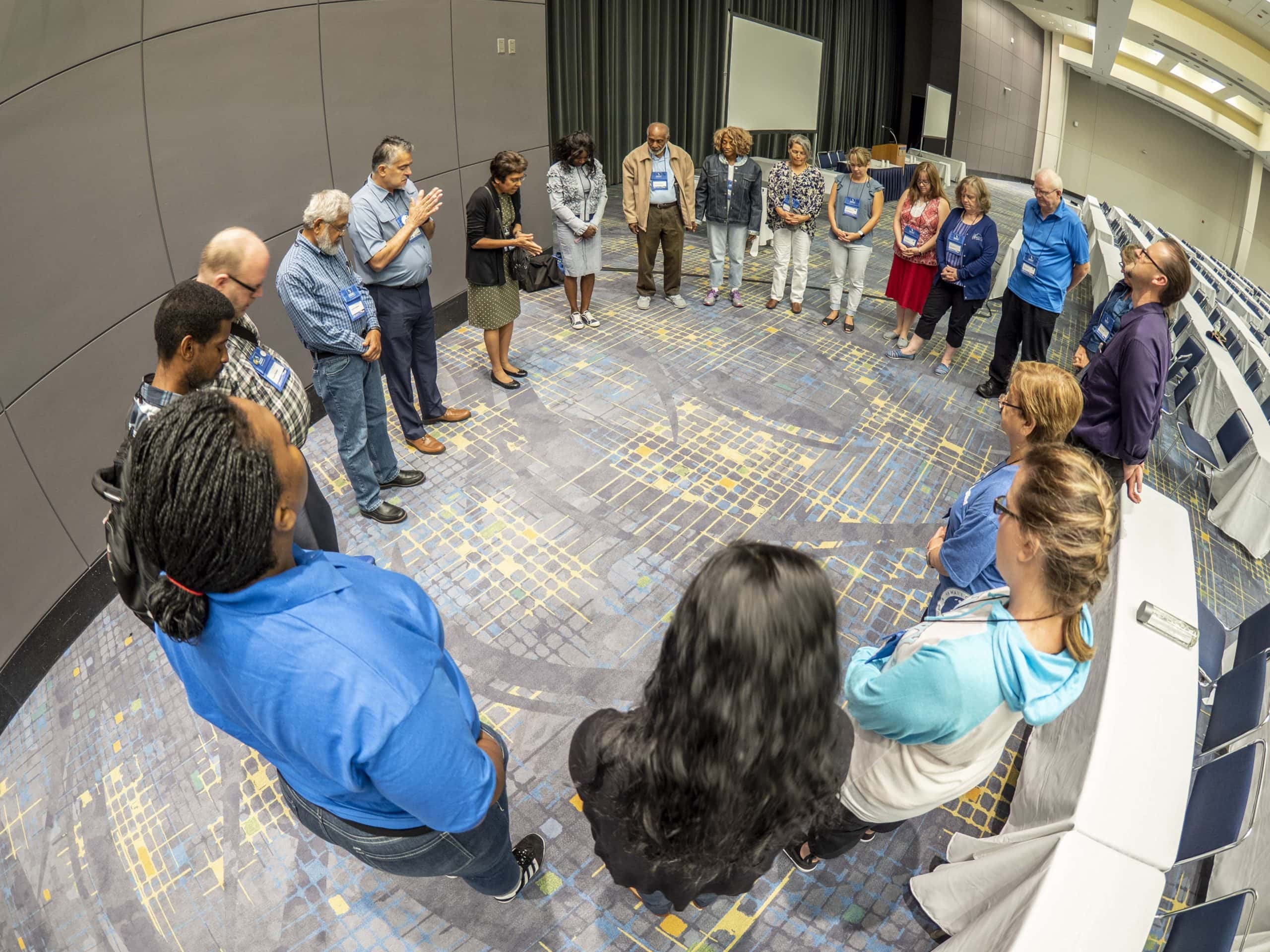 “We need to be anointed. We need God’s Spirit to rest upon our heads as we walk into those classrooms,” said Larry Blackmer, vice-president of education for the North American Division, during the anointing service on the final day of the 2018 North American Division (NAD) Teachers’ Convention in Chicago, Illinois, United States.

“I think today is one of those days we can celebrate. That we can look back on what’s happened in our ministry. We can look forward to what God is going to do in our classrooms,” said Blackmer.

A Ceremony of Dedication

Approximately 250 educators participated in the 6:30 a.m. anointing service. Sam Leonor, chaplain of La Sierra University, who was also the convention’s featured devotional speaker throughout the four-day event, delivered the early-morning message at the special service.

Leonor took participants through the history of anointing. He shared how it originated with shepherds placing oil on their sheep’s heads to repel disease-carrying flies. The oil was also used for medicinal purposes for sheep if they became sick.

Leonor went on to say that anointing with oil eventually became used to set someone a part for a specific mission or purpose.

“What is this purpose?” Leonor asked the teachers at the ceremony. “It’s big. There are lives entrusted to your care. You have been called for something really significant.”

While no oil was present at this anointing, a room full of dedicated teachers prayed for the Holy Spirit to lead and guide in individual hearts, homes, classrooms, and campuses. The teachers broke into groups of six to pray for each other, and to be prayed over by pastors and elders who joined their prayer circles.

“There is no partial anointing, halfway anointing. When we’re set upon this service of God, we give God everything,” said Leonor. “This is a whole being anointing. I’m dedicating myself to you, God. Everything I have is yours.”

After the final breakout sessions of the convention, NAD president Dan Jackson spoke for the commitment service.

“I do thank you, on behalf of the NAD, for the work you do,” said Jackson. “It can sound so patronizing, but I do thank you. God bless you in the moments of time when no one sees you, because those make up the bulk of the hours.”

Jackson’s message was based on a passage from the Bible book of 2 Kings (6:13-23), which tells a story from the life of Elisha. The passage describes the time when the nation of Aram was at war with Israel. Whenever the king of Aram planned an attack, God told Elisha where the attack would take place, and then Elisha would alert the king of Israel. This happened enough times that the king of Aram wanted to take Elisha captive. When the Aramean army was sent to find him, Elisha was able to see that an army from heaven had been sent to protect him and the nation of Israel, but the army could not be seen by others. He had to pray for his accompanying servant’s eyes to be opened to the sight.

Jackson presented three observations from this passage. He first remarked, “It is only a miracle of God’s power and gracious intervention in our lives that enables us to see into the spiritual world — that is, to see as God sees.”

“Unless God opens our eyes, the thing we may see is the relentless pressure that comes with the morning — how much work we must do, our own ineptness, our own inabilities. We may look at the board, the students, the constituencies. We may want to throw up our hands, but we do not see what God sees.

“God’s realities are different from my realities,” said Jackson as his second observation. “Our vision is dim because we fixate upon human limitation, human errors, human problems.

“We pray to God, we appeal to him, ‘Here is what I need, here is what I want, please help me fulfill my dream,’” said Jackson. “We don’t understand that the moment we pray that prayer, the answer is on its way. It may not get to us in the package that we want, but in God’s great, calm eternity, He has an answer, and He knows.”

While teachers must juggle many factors and uncertainties when it comes to education, Jackson reminded them, this is one constant they can always count on, both inside and outside of the classroom.

“As you go back to your place, whenever that will be, may you go with the knowledge that a good and gracious God is on your side, that He sees the things you see,” said Jackson. “And that if you and I will allow ourselves to be taken into the palm of His hand, He will guide us to joy.”