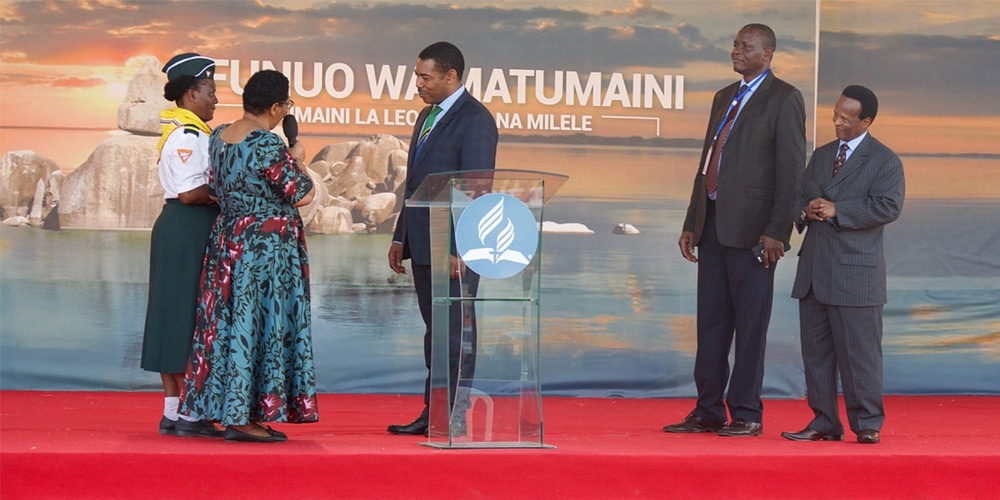 The honorable Mwigulu Nchemba, Tanzania’s Minister of Internal Affairs assisted in launching a three-week satellite evangelism series in the country’s rocky city of Mwanza on Sunday, May 13, 2018. Nchemba was received at the Kirumba CCM Stadium by a rainbow of pitched tents interspersed in the perimeter, a group of Pathfinders, and women parading in the lawn and a cohort of choirs in their colorful uniforms singing.

In his remarks, Nchemba said that he was more than willing to come and launch the Adventist evangelistic meetings because he respects Seventh-day Adventists for their contribution to the development of the nation. He further stressed that the meetings would contribute to the decrease in crimes because many people will accept Christ and change their lives. “When the Word of God is spoken and followed, the burden of the government becomes light,” he said.

Among their qualities, which he admires in Adventists, is their education of the youth. “They are good models in the country,” he said. He also shared that when he was a student, he had Adventist classmates whose Christian lives left indelible memories on his mind. He added that he knows Adventists as people who walk their talk no matter where they are. “You are a book we all read, and I am glad that you are positively legible in your business.”

Earlier on, the executive secretary of South Nyanza Conference had presented the challenge of scheduling exams on Sabbath in public schools, which makes life difficult for Adventist students. In his response, the Minister stated that as a government, they respect freedom of worship and therefore he is going to do the best he can to make sure all the Adventist students exercise their faith freely.

Before he concluded, he asked Adventists to pray for him, for the president of the Republic of Tanzania, John Pombe Magufuli, and for the government at large. He finally expressed his wish to have Seventh-day Adventists increase in numbers. “How can we afford to have more bars and dancing clubs than churches in our cities! We will spare no efforts to support the church because in so doing we will be supporting our community at large.”

As he had requested prayers, East Central Africa Division (ECD) president Blasious Ruguri prayed for him on the spot and asked God to bless the Tanzanian government for the religious liberty it grants.

The Northern Tanzania Union Conference is organizing the satellite evangelistic meetings. The main speaker is international evangelist Mark Finley. He is accompanied by his wife Ernestine Finley, who is presenting health talks, and one of the world church vice presidents Geoffrey Mbwana. The “Revelation of Hope” meetings are broadcast live on Hope Channel Tanzania and shared through social media. Last Saturday, the turnout was more than 22,000. It was also announced that 45,000 cities are receiving the signal and baptisms have already taken place in some areas.