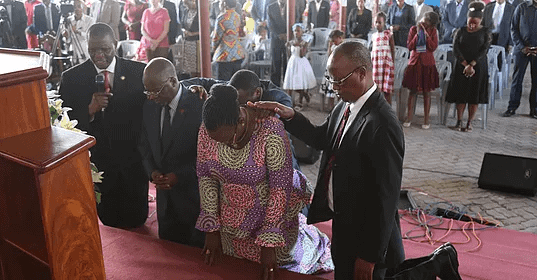 The President of the Republic of Tanzania John Pombe Magufuli attended Sabbath worship services on September 2, 2017, at Magomeni Adventist Church, in the capital city of Dar es Salaam. The president’s visit brought support to a construction project of a new church building.

Magufuli assured Adventists members and leaders that his administration recognizes the contribution of religious institutions, and plans to continue supporting all religious denominations in actions of service which may benefit the citizens of Tanzania.

“Our government will continue to cooperate with religious leaders in serving the people,” said Magufuli, who was accompanied by his wife Janeth.

Toward the end of the service, Magufuli thanked Southern Tanzania Union Mission president Mark Malekana for his sermon message.

“I thank you for the excellent sermon you have preached today,” said the president. “It has deeply touched me.

Makelana based his message on the biblical story recorded in Genesis 41, and specifically on verse 38, where after meeting Joseph in Egypt, Pharaoh asked, “Can we find such a one as this, a man in whom is the Spirit of God?”

Once again, Magufuli highlighted religious denominations’ contributions to the nation and reaffirmed his commitment to supporting them.

“[Religious] denominations, including the Seventh-day Adventist Church, make a significant contribution to our nation, and I assure you that the government will continue to cooperate with you,” he said.

In his tributes, Malekana thanked Magufuli for joining church members at the Sabbath worship and contributing to the new church building. Malekana also led out in a special prayer of consecration for the nation and its president.