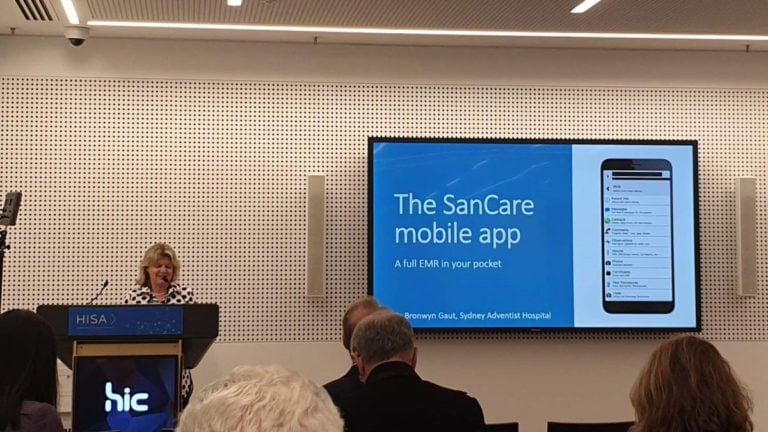 Sydney Adventist Hospital in Australia, commonly known as the San, has won a prestigious award for creating an app that puts patient health information at their doctor’s fingertips.

San Medical Informatics doctor liaison Bronwyn Gaut and the San information services team showcased the app at the HISA conference in Melbourne, August 12-14, 2019.The app was designed and built by the San’s health informatics experts to give doctors real-time access to patients’ records, enabling them to see up-to-the-minute vital signs, most recent x-rays, scans, and test results, and to communicate with nursing staff and extended care services.

Gaut was instrumental in seeing the project evolve from conception into its current form.

“In health care, timely access to the right information can be life-saving,” she said. “This app connects directly to the patient’s electronic hospital records so that doctors always have their patients’ latest information at their fingertips.”

According to Gaut, very few private hospitals in Australia have electronic medical records; however, the San has had an electronic system in place since 2010.

“From the start, we have had remote access for doctors of our full electronic medical record, but that involved a computer and logging in. Now, they can whip out their phone, open the app, and see everything about their patient,” he said.

For anesthetistand pain specialist physician Alan Nahza, the SanCare app has become part of his daily routine at the San.

“It gives me more time with my patients rather than flicking through the notes and trying to assess their progress, which is what it’s ultimately all about,” he said.

“It’s fantastic not just for patient care but also for collegiality. We’re communicating in a far superior manner.”

David Page, also an anesthetist at the San, agrees with Nahza, calling the app a “ward without walls.”

“I can access the patient’s clinical state at any time, from anywhere,” Page said. “If I’m called up by nursing staff about a patient, I can write up the notes immediately from home or another hospital, and this improves patient outcomes.”

The app development team has been working closely with doctors to ensure that the SanCare app is user friendly and fits seamlessly into daily routines and tasks and that users’ advice is taken on board and tested.

“To translate it from an idea to something that doctors actually want to use and log in to check how patients have gone overnight, to get that feedback from doctors is pretty exciting,” said mobile app developer at San information services Ian Jones.

The San information services team has also developed a mobile app for wardsmen and radiographers to help manage their jobs around the hospital. Project manager John Sanburg said it has changed the way extended care services operate at the San.

“Wardsmen can place an order in SanCare, a bit like sending a request to an Uber driver, and radiographers can pick up jobs on the run.… It means they don’t have to come back to base to pick up the next job. It’s improved our efficiency enormously.”

“It’s been a game-changer for doctors and patients; we are very proud of it, and the team has done an excellent job at providing all the information doctors could possibly need at their fingertips,” Gaut added.