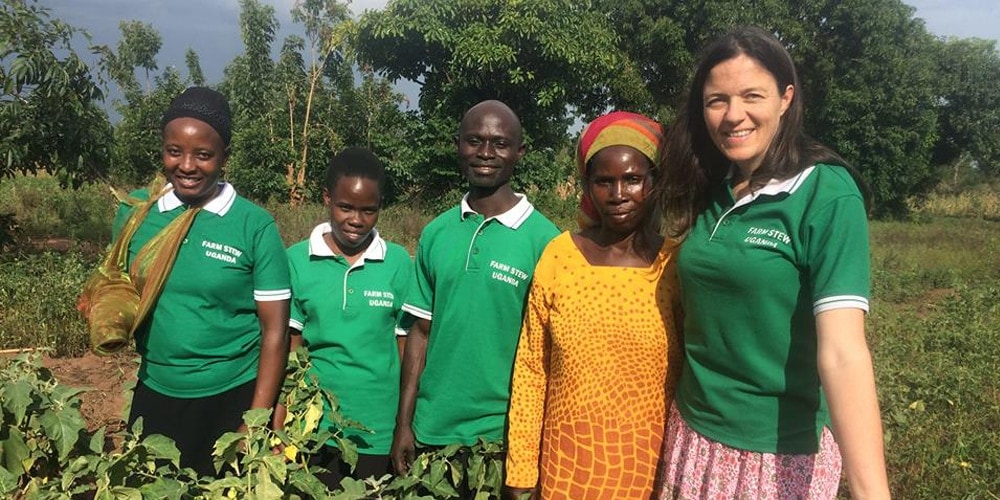 Joy Kauffman had a passion for service long before she became a Seventh-day Adventist. Even though she was close to Adventists from day one — she was born in an Adventist hospital in the US — there was something beyond her decades as a Christian of another faith that seemed to prevent her from moving forward.

“I knew there was something beautiful in Adventism,” she says, “but I didn’t know if it was worth it.”

Her ambivalence about the Adventist Church didn’t stop even after she had kids and felt a desire to keep growing in her Christian walk. “When I became a parent, I discovered I needed something more,” she says. “I started to read my Bible more. I realized I had never heard about holiness or repentance. I did not even have a working definition of what sin was.”

A Missionary in Africa

Then she went to Africa.

Thanks to her connections to yet another Christian faith, Kauffman, who holds a Master of Public Health and International Development from John Hopkins University, visited Zimbabwe and Uganda, where she got involved in agricultural and orphans’ assistance projects.

When visiting Eastern Uganda, she was impressed by both the extent of the needs and the faithfulness of a group of Seventh-day Adventists who shared her passion for helping the poor.

“Meeting Ugandan Adventists finally gave me the courage to join the church,” says Kauffman, who was baptized into the Adventist Church in 2015. “I love the idea of being part of a global family.”

Eight Principles for an Abundant Life

Around the time of her baptism, Kauffman launched a supporting ministry that she called FARM STEW, based on an acronym on eight elements that she considers “A recipe for healthy living”—Farming, Attitude, Rest, Meals, Sanitation, Temperance, Enterprise, and Water.

The new ministry seemed to come into existence at the right time.

“I found out that farmers in Eastern Uganda were growing soybeans, but they wouldn’t give them to their children, who were dying for lack of protein,” she says. “The truth is, they did not know how to process them.”

Kauffman and her Ugandan assistants moved fast to teach them how to incorporate soybeans in their diet, in ways that were tasty and healthy, while providing them opportunities to start small businesses.

“We started teaching them about soaking the beans, making tofu and soy milk, and adding the by-product of the soymilk right back into the porridge that everyone ate for breakfast,” she says. “We also told them what difference it would make in their health.”

Other health-enhancing activities the ministry implemented include teaching rural villagers to grow vegetable gardens and manufacture their own soap.

Despite her initial success, it did not take long for Kauffman to become aware of the challenges ahead. She saw that the needs in the region were so dire that the usual model of stopping by a place and teaching people what she knew would never get the job done. In need of a team effort, she soon began applying the “train the trainer” model.

“I found out that there were people already trained that were expecting an opportunity and that we needed to use,” she says, “so I hired five people to start training others.”

The new trainees were eventually ready to train many more, now with the assistance of a special training package with materials especially developed for the program.

Kauffman believes she was able to do this by tapping the volunteer organization of the Seventh-day Adventist Church. “Ugandan Adventists are behind this project,” she says, “and we have the advantage of working through communities in the church.”

Lately, the Ugandan team of trainers has been invited to share the program in prisons, hospitals, and mosques across the region. “There’s so much we can do if we make an effort,” says Kauffman.

Overall, Farm Stew, which is funded by the private contributions of church members and supporters, has already trained over 28,000 people living in rural isolated villages about the principles of healthy living. “We also keep good records, so [volunteers] can go back to the same villages to assess the impact that we have had,” she says.

The Gift of Abundant Life

Both inside and outside the Adventist Church organization, experts in development ministries are taking note of Farm Stew. One of them is Outpost Centers International (OCI) field vice president for Africa Kim Busl, a man with decades of experience in similar ministries.

“I [am] more than pleasantly surprised at the exceptional work they are doing to improve in a very practical way the nutritional needs of the rural people,” shared in a recentreport. “They put on the simplest and yet most comprehensive ‘cooking school’ that I have ever seen.”

Busl shared his experience after witnessing one of Farm Stew’s training sessions. “Every one of [the coordinators] is interesting, animated and knowledgeable. They interact and engage the people in a way I have not seen before. It was a first-class presentation,” he wrote.

Recently, the ministry branched out to Zimbabwe, where a team of volunteers have trained the first 115 people. They also began to work in Northern Uganda, assisting hundreds of refugees arriving from South Sudan, and there are plans to launch the program in Ethiopia. The possibilities, believes Kauffman, are endless.

Despite the ministry’s ongoing success, however, Kauffman believes that the ultimate goal of Farm Stew is to give people skills that allow them to have an abundant life. According to her, however, enjoying a fulfilled and happy life implies much more than soy protein at mealtimes.

“One of the things I love about our Farm Stew team is that we are able to introduce the good news of Jesus in areas that are mostly non-Christian,” she says. “[Volunteers] are going out and taking the message deep, deep into the villages. They are willing to sacrifice to bring the message out to people who would never even get to the big cities.”

As a result, Kauffman says she feels useful and fulfilled by being in the right place at the right time.

“I know I have something to offer to the church,” she says. “And I know God prepared me for this calling since I was a child.”