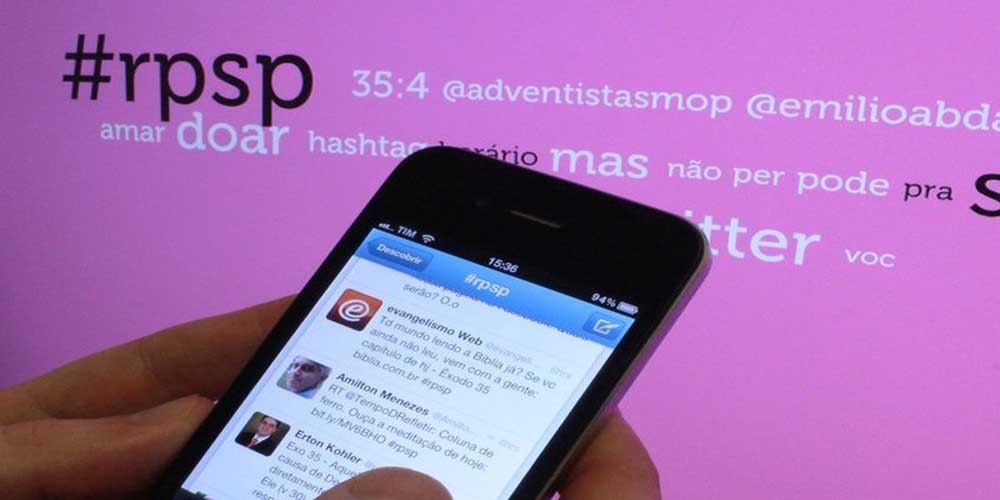 If
you live in South America and are active on the microblogging service, chances
are you know that it stands for Reavivados por Su Palabra, or Revived By His
Word.

Several
thousand Spanish- and Portuguese-speaking Seventh-day Adventists have been
tweeting their thoughts on the daily Bible reading plan since the world church
launched it in 2012, and their efforts have made #rpsp one of the most popular
hashtags on the continent. In fact, the hashtag has made the top list of
trending topics — the most-discussed topics
on Twitter — in
Brazil and several other countries of the South American Division.

“It
has been very uplifting to see how the church has reacted positively to Revived
By His Word and the amount of daily tweets that we’ve had in the past couple of
years,” said Magdiel E. Pérez Schulz,
who oversees local social media as executive secretary of the South American Division.

Revived
By His Word kicked off on April 17,
2012, with the church’s 13 division presidents taking turns reading Genesis 1
during a meeting at the world church’s headquarters in Silver Spring, Maryland.
At the same time a Web site,
revivedbyhisword.org, opened where
people can read all 1,189 chapters of
the Bible by
committing to one chapter a day until the General
Conference Session starts in San Antonio, Texas, in July 2015, and then two
chapters a day during the 10-day meeting.

The daily reading, which is
available in multiple languages, pairs each chapter with a reflective blog
entry written by an Adventist church leader or layperson. About 105 bloggers
have contributed so far, and another 50 are expected to weigh in by the time
the project wraps up.

Adventist leaders have expressed hope that at least half of the church’s 18
million members would get involved in Revived By His Word, an amount slightly higher than
the estimated 47 percent of Adventists worldwide
who were reading the Bible every day when the online initiative started.

While comprehensive
readership figures were not immediately available, each chapter on the
English-language version of the site attracts 200 to 400 comments and thousands
of readers daily, said Derek Morris, who helps steer the project and is the associate secretary of the world church’s Ministerial Association.

South America by the Numbers

But the South American Division
and particularly Brazil, which has more than 1.3 million Adventist members, appear
to be at the forefront in sharing the Bible plan via social media.

“Magdiel
has been doing an amazing job with tweeting for Revived By His Word,” Morris said.

Magdiel E. Pérez Schulz said
it was only natural for local church members to start tweeting Bible insights
to their communities.

“We
use those networks to keep up with old friends and family, and we use Twitter
to learn and to keep us informed,” Pérez
Schulz said in an e-mail interview. “Why couldn’t we use it as a tool to share the gospel
and to keep others posted about what we have learned or what has touched us
during that day’s reading?”

That
kind of thinking has seen the number of #rpsp tweets soar from zero in April 2012
to about 3,000 a day in July 2014. According to Twitter statistics, about 6,530
participants have sent some 100,000 tweets with the hashtag over the past 11
months, reaching 8.5 million people who saw the tweets a total of 197 million
times (impressions).

The
region’s Facebook figures for Revived By His Word are also high.

“This
shows that our members are committed to the project and to using their time and
talents in this area,” Pérez Schulz
said.

Local
leaders make an effort to retweet messages from youth, Pathfinders and other
members. “The retweets show our members that we value their comments and that
we learn from them,” Pérez Schulz said.

He
underscored that South American Division President Erton Köhler, who has a
respectable 30,500 followers, and other senior local Adventist officials tweet
regularly about the Bible chapters.

PRESIDENTIAL TWEET: Erton Köhler, president of the South American Division, tweeted about Ezekiel 23 on Sunday, July 20: "It hurts God's heart to have an attitude of profanity while trying to offer worship."

“Remember
that if leaders do this, then those who follow us will imitate us,” Pérez Schulz said. “So
we need to be the first. God has called us to do this.”

Revived
By His Word is, or course, tweeted in other parts of the world as well, and a
Twitter symbol on its Web site allows readers to share their thoughts easily.
But no territory seems as keen on sharing the Bible in this format as the
members of the South American Division.

Pérez Schulz said three
factors had helped local Adventists to latch onto the idea of tweeting: anyone
can participate, it doesn’t take much time every day to do, and it can be done
from any location.

“We believe that this project is simple, relevant and daring,”
he said. “This is the way projects should be in order for them to find success
in modern society. We use those three words a
lot when planning our missionary and witnessing projects.”

The division also has developed a cell phone app that allows
people to read the Bible chapters in various languages, reminds them of the daily
reading, and lets them tweet directly from the app.

While less than
12 months remains before the project ends, Adventists around the world can and
should find ways to promote Revived By His Word, whether it be through Twitter or
other means, Pérez Schulz said.

“We found out that we could work effectively on this project
through social media, but maybe other people have other ideas on how to promote
it. Let your imagination work,” he said.

“But if you want to hop onto this initiative, do so and involve
everyone,” he said. “We’ve got work to do. The gospel needs to be preached in
every possible way.”