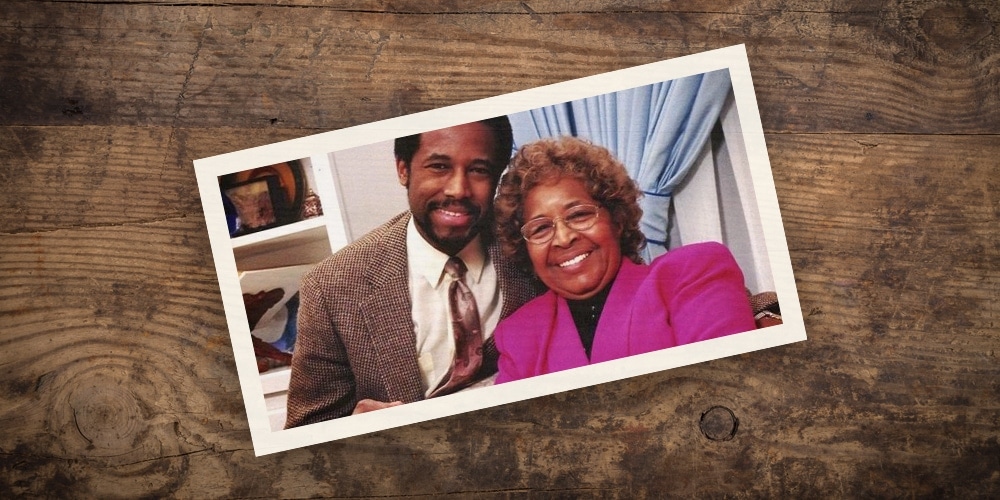 Sonya Robinson Carson, the mother of Ben Carson, renowned pediatric neurosurgeon and current Secretary of the United States Department of Housing and Urban Development, passed away at 88 on Nov. 6. Sonya Carson, a single mother with little formal education, is credited with having been the molding influence on Ben Carson’s life, as he has acknowledged numerous times.

“All that I am is because of the love of my mother,” wrote Carson in a tribute on one of his Facebook pages on Nov. 8 as he shared the news of her passing. “She was one of God’s greatest blessings to me, and it was her foresight and discernment that pushed me to reach my dreams.”

Sonya Robinson Copeland was born on Dec. 24, 1928, and grew up in rural Tennessee in a large family. She stopped attending school after the third grade before she could learn how to read and write.

At 13, Sonya married World War II US Army veteran Robert Solomon Carson, 15 years her senior, and several years later had two sons, Curtis and Benjamin. In 1959, when Ben was eight, Sonya made the difficult decision of leaving her husband, having discovered that he had never divorced his first wife. Sonya and her two sons moved in with an older sister in Boston, Massachusetts. Sonya’s sister was a Seventh-day Adventist Christian. Eventually, she and the boys would also be baptized into the Adventist faith.

Those were difficult years for Sonya, who fought depression, while working long hours as a domestic worker. Two years later, the family decided to return to Detroit.

In a story related by Ben Carson in his 1996 book Gifted Hands and numerous interviews, he wrote that his mother was instrumental for him and his brother to start catching up and making headway in school. Carson has often shared that at times his academic performance lagged well behind his peers. Sonya, however, taught her sons that it was in their power to change their situation in life, both academically and financially.

“[My mother] understood how success was achieved in our society,” wrote Carson in his Facebook tribute. “If anyone had a reason to make excuses, it was her, but she refused to be a victim and would not permit us to develop the victim mentality either.”

According to Carson, his mother devised a plan for her sons to curb TV time and write two book reports a week instead. Working as a domestic for successful families, she had noticed that they read far more than they watched television. The required book reports were turned in to Sonya who would mark them up with checkmarks and highlights. “Years later we realized her marks were a ruse,” wrote Ben Carson in an NPR commentary on parenting. “My mother was illiterate; she had only received a third-grade education.”

For Ben, regular reading was the beginning of a fruitful academic career that eventually took him to Yale, and to John Hopkins University Hospital, where he worked as director of Neuropediatric Surgery from 1984 to his retirement in 2013.

Carson has repeatedly shared how his mother often told him and his brother that they could do anything, and do it better if they just worked hard at it. “She always had faith in us, and she never accepted excuses,” said Carson. “Her life maxim was, ‘Learn to do your best, and God will do the rest.’”

Inspired by Sonya’s life and the principle she taught, Ben and his wife Candy created The Carson Scholars Fund in 1994 to support two main initiatives—The Carson Scholars Program and The Ben Carson Reading Project. The first awards scholarships to students who have embraced high levels of academic excellence and community service. The second provides funding to schools to build and maintain Ben Carson Reading Rooms, “warm, inviting rooms where children can discover the joy of independent leisure reading,” according to the charity’s website.

The fund also honors people who make a difference in the life of students by giving the Sonya Award. For years, Sonya Carson supported the fund by regularly attending reading room openings, and “flourished in the children’s enjoyment of reading,” according to a tribute video posted on YouTube. The Sonya Award recognizes community role models and people who uphold Sonya’s standards and share her drive.

After Sonya’s passing, Ben Carson thanked those who are providing comfort and support in their time of grief. “Over the past few days, we have received so many thoughtful and encouraging notes and comments from many of you, and for that, we are extremely grateful,” wrote Carson.

And Carson does not hesitate to acknowledge the debt of gratitude he has with his mother, whom he believes responsible for many of his achievements.

“She has been such an important influence in my life,” he said.