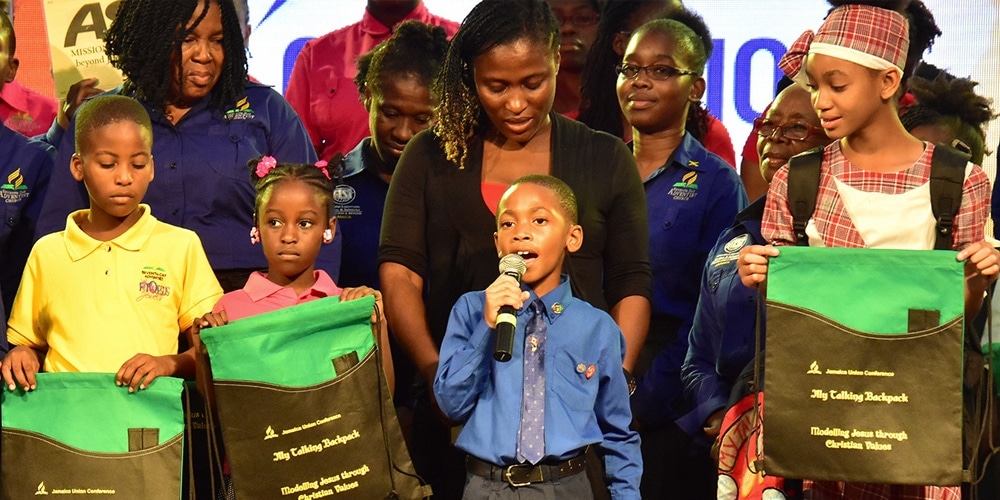 His voice was clear and crisp, but it was the words spoken by six-year-old Dakarai Williams that held thousands of worshipers in rapt attention at the Lord Transform Me Convention held at the Montego Bay Convention Center in Jamaica on February 9, 2019.

“Two years ago l was asked to be baptized, but l said, I cannot get baptized and go to heaven leaving my mother behind to be lost. It touched my mom’s heart. She must have seen how sad l looked. But guess what?” Dakarai said, and an instantaneous response came from the congregation — “What?” With excitement in his voice, Dakarai said, “My mom gave her heart to Jesus!”

Dakarai Williams’s testimony stirred a chorus of amens from the congregation, which included Adventist world church leaders and the church’s president, Ted N. C. Wilson, and his wife, Nancy. The entire day’s program was carried live on the Internet and aired on the Adventist-run NCU radio station.

Mary Meeks, Dakarai’s mother, later said that while the boy was attending the Trench Town Adventist church school, he was invited to witness his teacher’s baptism at the Greenwich Town Adventist church in Kingston. After the service, one of the other teachers, Theresa Wint, asked Dakarai if he wanted to be baptized. With hesitation he said, “No.” Wint asked, “But why?” What came next from the little four-year-old’s mouth surprised her. “I cannot get baptized because I don’t want to go to heaven and leave my mother to be lost.”

When Mary heard what her son had said to his teacher, she was stunned, she said. “I didn’t know that Dakarai was thinking like that. My heart melted, and I explained to him that I couldn’t get baptized right now.” She also had to discuss with him the appropriate age for his baptism. “He was too young, so we decided that he would wait until he was seven years old.”

That night, Mary confesses, she felt overwhelmed and cried. “I had no plans for baptism. I was a regular partygoer, and I enjoyed the sporting events that were held on Sabbath. So this discussion with my son about baptism really hit me.”

Not long after, during one of Mary’s visits to the Trench Town Adventist church, she responded to an altar call. She signed a visitation card, and the Bible workers were persistent in their visits. “I told them, your time and the pastor’s time are not my time and God’s timing,” she said.

One month later, on December 24, 2017, Mary said she felt impressed that it was time. She was already attending the Trench Town Adventist church’s evangelistic campaign, and in the second week, she made her decision to be baptized. “I packed my bag and went to church. I didn’t tell Dakarai what my plans were, but he was smart. He figured it out.”

Mary said Dakarai was very excited. “But I had to remind him that he promised to wait until he is seven to get baptized.” That will be in March 2019, she said.

While Dakarai waits, he has been busy. And he has been responsible for not just one baptism but three.

Lerline James, the former principal of the Trench Town Adventist Church Basic School, said that Dakarai would tell his friends about Jesus. ”He had one special friend, Jah-Vinchi Carty, they were close, and Dakarai would read to him the same Bible stories that his mother taught him. He also invited Jah-Vinchi to Sabbath School, and I would take him.”

During the Lord Transform Me celebration on February 9, Jah-Vinchi, at age seven, was baptized at the Trench Town Adventist church. Another friend, Dresean Tape, was baptized last year.

“I am glad that my friends have given their hearts to Jesus, and very soon I will be doing the same,” said a very confident Dakarai.

Currently, Dakarai is attending the Kingsway Preparatory School and is in first grade, according to Donna Brown, education director at East Jamaica Conference (EJC). “He was awarded a six-year scholarship courtesy of the EJC Conference development fund. Dakarai remains quite active and is a real motivator to his peers.”

Dakarai’s achievements include winning the EJC Bible Speller-ton at age four, second place winner at age five, and first place winner at age six.  He is also the youngest member of the Junior Adventist Lay Persons and Industries (ASI), and he has had opportunities to be a preacher. Currently, he is also actively involved in the Trench Town Adventist church’s Adventurers Club.

“I am truly inspired by young Dakarai,” said EJC president Eric Nathan. “What he has done through the Spirit of the living God in influencing three persons for the kingdom is worthy of admiration and commendation.”

Nathan applauded Dakarai’s mother for training her son in service to God and humanity. He also commended the church family that has been directly reaching the community members in the inner city of Trench Town. ”Dakarai and his friends will be three less gunmen on our streets, and I am happy for this,” he said.