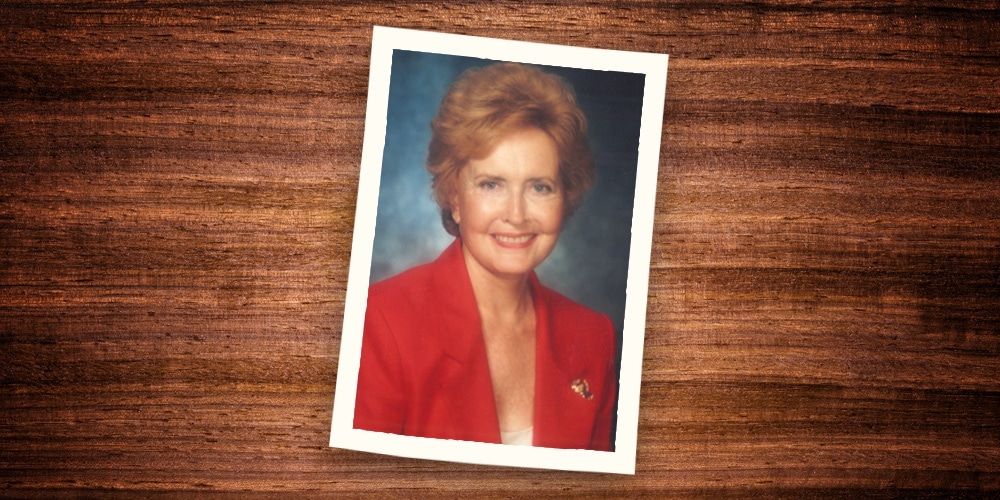 Shirley Neil Pettis, a former member of the U.S. House of Representatives and a longtime supporter of Loma Linda University Health, passed to her rest in Rancho Mirage, California, on December 30, 2016. She was 92.

Born Shirley Neil McCumber in Mountain View, California, on July 12, 1924, to Harold Oliver and Dorothy Susan O'Neil McCumber, Shirley studied at Andrews University in Berrien Springs, Michigan, and at the University of California at Berkeley. After the death of her first husband, Dr. John McNulty, in World War II, she married Jerry L. Pettis, a World War II flight instructor. Jerry Pettis would go on to become a self–made millionaire and a professor of economics at Loma Linda University. They raised two children, Peter and Deborah.

During her term in the House, Pettis used her seat on Interior and Insular Affairs to advance legislation protecting desert lands in her district.

Shirley Pettis held numerous positions within the private and public sectors, and along with her husband, was a founder and manager of the Audio Digest Foundation, a nonprofit affiliate of the California Medical Association that placed abstracts of medical journals and lectures on audio cassette tapes.

In 1975, Shirley won a special election to fill the 33rd Congressional District’s vacancy caused by the death of her husband, Jerry L. Pettis, who had served as that district’s congressional representative from 1966 until his untimely death in a plane crash. She was reelected to Congress for a second term, ultimately representing her district from April 29, 1975-January 3, 1979.

During her term in the House, Pettis used her seat on Interior and Insular Affairs to advance legislation protecting desert lands in her district. She secured wilderness status for nearly half a million acres in the Joshua Tree National Monument, which limited vehicular access and prohibited development. One of the first projects Congresswoman Pettis took on was completing passage of the California Desert Protection Bill that her husband started. Her hard work paid off. The Los Angeles Times wrote, “It was the most monumental piece of land legislation in our era.” In 1994, Joshua Tree became a U.S. National Park.

Pettis also worked to have the California desert established as a conservation area. During her tenure in Congress, she took up her late husband's fight to win federal funding for a cleanup of the Salton Sea, a large lake in her congressional district that was home to migratory birds. She also helped to bring the first solar power plant in the nation to her district.

Shirley Pettis chose not to run for re-election at the end of her second term. However, she continued her service as vice president of the Women’s Research and Education Institute, Washington, DC, 1980-1981; member of the Arms Control and Disarmament Commission, 1981-1983, and the Commission on Presidential Scholars, 1990-1992. She was a member of the board of directors, Kemper National Insurance Companies, 1979-1997.

The Shirley N. Pettis Award established by Children’s Hospital was named in her honor to acknowledge the contribution of individuals who model her outstanding dedication to children.

“Loma Linda has been a special place to Jerry and me, and I’m so honored that this great University will house the joint record of our Congressional service,” she said. The collection was officially dedicated in November 2007. Former U.S. First Lady Barbara Bush, wife of President George H.W. Bush, attended and paid special tribute to Shirley Pettis during the event.

“Loma Linda has been a special place to Jerry and me, and I’m so honored that this great University will house the joint record of our Congressional service”

“The remarkable gift of the Congressional papers and assorted memorabilia from the Honorable Jerry Pettis and Shirley Pettis will give our generation and future generations the privilege of remembering and marveling. For indeed these are ordinary people who lived extraordinary lives as they moved comfortably between our local community and its issues and the highest reaches of government,” said Richard Hart, MD, DrPH, Loma Linda University Health president. “Their contributions on behalf of the Loma Linda University and the Children’s Hospital extend far beyond their roles and years in public service. Their legacy here is a strong thread in the fabric of our institutional history.”

Shirley Pettis received the Loma Linda University Health President’s Award in 2007, in recognition of her dedication to democracy and freedom and walking on the stage of the world with dignity and wisdom, at the same time maintaining a common touch and friendship, because of her devotion to children in this region and around the globe, and because of her extraordinary life of service.