Sharing Jesus With a Twist in Malaysia 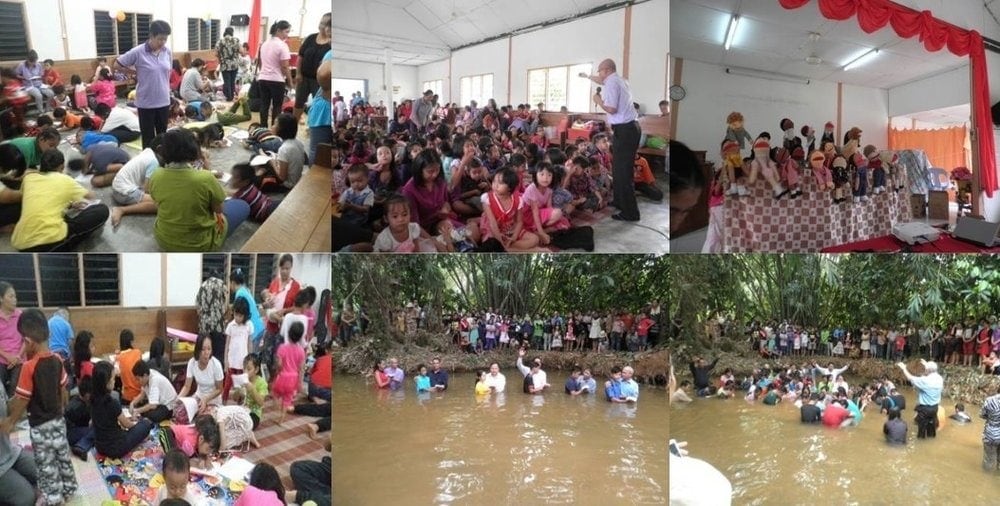 Seventh-day Adventist leaders in Malaysia started out planning an evangelistic series for adults.

They ended up also hosting a highly unsual nightly Vacation Bible School whose wild popularity is credited with contributing to the evangelistic series’ 69 baptisms.

Church leaders in Kampung Simboh, a town in Malaysia’s state of Sarawak on the island of Borneo, initially focused on adult programming as they prepared for an evangelistic series on Aug. 2 to 8 but soon realized that children’s programming was also needed to more fully reach families in the surrounding communities.

Someone suggested that they offer a nightly Vacation Bible School for the children, and the other leaders enthusiastically agreed. Although Vacation Bible School is more traditionally used during the daytime hours of summer or school breaks, the leaders quickly discovered that it complimented the adult programming with few adjustments needed.

How did the children respond?

The first night 89 children attended, and the attendance among both children and adults increased the following day to reach an average of 300 to 350 people each night. The theme, “Kids of the King: a Royal Adventure,” seemed to enthrall the children as they learned about God through games, crafts and interactive stories, organizers said.

Vacation Bible School attendance increased each night throughout the week until it peaked at 135 on Friday night. When program leaders invited the children to attend the final program the next day, they weren’t sure how many would actually come on a Sabbath morning.

To their astonishment, 179 children showed up, with many of the regular attendees bringing young friends and relatives who had not previously attended.

As surprising as this was to the leaders, the responses of the children brought even more joy, they said. The children shared their joy at having this kind of program because it was active and they felt they had a special part. The children expressed hope that a similar program would be organized next year.

“I was happy to share in the joy and celebration,” said Joggery Gelu, children’s ministries director for the Adventist Church’s Sarawak Mission.

He said he was amazed that nightly attendance reached 300 to 350 despite people’s busy schedules.

“Really, though, it is not the attendance totals that are most important,” he said, adding what mattered most to him was the children’s new “spiritual connection to the Creator and Lord Jesus Christ.”

With a total of 69 baptisms from the evangelistic series, organizers said they have learned that family-centered programming with a particular emphasis on children’s ministry can be a vital tool in religiously diverse areas such as Malaysia.

Kampung Simboh is located about 23 kilometers from the Sarawak Mission headquarters in Kuching, capital of Sarawak state. Malaysia is a predominantly Islamic country, but Buddhism, Hinduism, Sikhism, various Chinese religions, indigenous religions, and Christianity are also practiced among its population of more than 23 million people. Malaysia’s Sarawak state has 28 Adventist churches with more than 5,500 members.