Serving the Homeless, Sick, and Food Insecure in the Face of a Pandemic 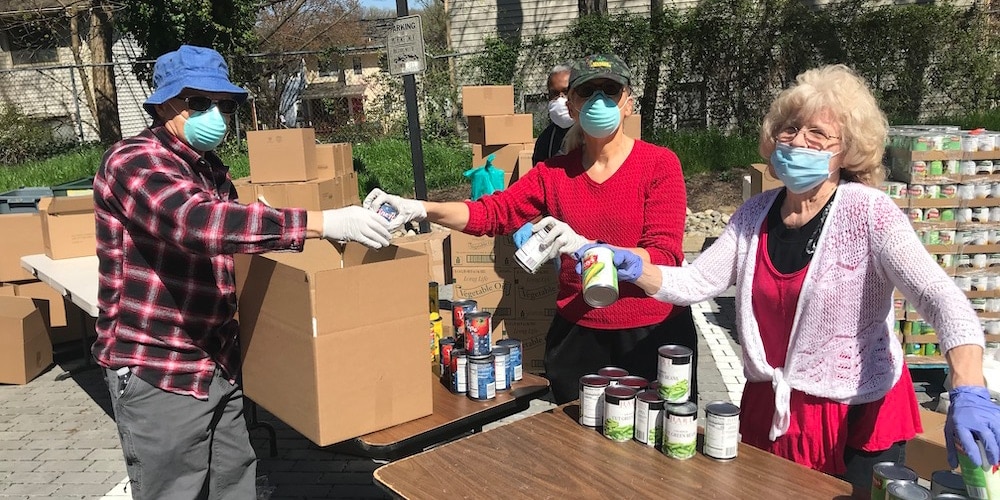 In February and March 2020, unprecedented, widespread measures have been enacted to decrease gatherings and increase physical space between individuals in public spaces. While society at large has taken a detour from its normal operation with the closing of businesses and schools, the needs of the marginalized remain — many are still without homes or jobs, require medical attention aside from care related to COVID-19, or need food and supplies for their families.

“It’s important for ministries which serve the vulnerable to continue their ministries in the middle of a global pandemic because when people are the mostvulnerable, they need the hope and assurance these ministries provide,” said Bonita Shields, vice president for ministries of the North American Division.

The following are glimpses into three services operating within the North American Division church region that have remained committed to serving the disenfranchised population in their communities as they face daily evolving challenges and the potential dangers presented by the coronavirus disease.

Since January 3, 2020, the Omega Seventh-day Adventist Church in New Haven, Connecticut, has turned its fellowship hall into a warming center for some of the city’s homeless population. Every day, up to 70 people, known as clients, have benefited from a warm place to stay overnight and two meals — dinner and breakfast. The clients also have access to showers through the Adventist Community Services (ACS) “Showers of Blessings” mobile shower van. The church also provides yoga mats and pillows for sleeping.

The operation is guided by ordinances set by the city of New Haven.

The alarming influx of COVID-19 cases prompted New Haven to make adjustments to services provided to the city’s marginalized population. The warming center was directed to make changes that coincide with recommended hygienic practices and social distancing measures, including maintaining six feet between clients.

“We had to reduce our occupancy by half,” said Shaunette James-Marquis, member of the Omega Adventist church, professional social worker, and director of the warming center. “We took away the yoga mats and pillows. Our clients now sleep on chairs. They’re understanding.”

New Haven also sends a doctor to the center every other day to take the clients’ temperatures to help spot symptoms related to the virus. At the time of this reporting, none of the center’s clients had contracted COVID-19.

The number of volunteers has decreased. Those who remain wear masks and gloves.

James-Marquis said the clients are feeling more restless with having fewer places to spend time during the day due to citywide closures and social distancing protocols. Many are lining up three to four hours before the center opens its doors because they don’t have anywhere else to go.

“Most are showing signs of separation anxiety. I remind my staff to maintain patience and compassion,” James-Marquis said.

“A community that’s gone through trauma has learned how to rally together. They know the only way to get through is together,” said Elisabeth Gundersen, president of MEDSPIRE, referring to residents of Paradise, California, a community that experienced devastating wildfires in late 2018.

MEDSPIRE is a mobile health clinic that formed in the immediate aftermath of the Paradise fires. It provided medical care in the absence of health-care facilities, which had been destroyed. The area has since gained three primary care facilities and one urgent care clinic.

Since the clinic is a mobile unit and not an official “brick and mortar” business, it is not considered an “essential business” that is allowed to remain open. When preparing for the clinic that was scheduled for March 22, leaders of MEDSPIRE did not want to increase the risk of exposure to its volunteers and patients by operating in close proximity to patients, even if the clinic was outdoors or functioned as a “drive-up” service.

To continue serving the community, MEDSPIRE transitioned to a telemedical clinic, where patients called a number to share their symptoms with either Gundersen, who is also an adult nurse practitioner, or Theodore Muller, MEDSPIRE’s medical director, who has more than 20 years’ experience as an emergency doctor. The two provided guidance on how patients could treat symptoms of various ailments.

“The name of the game is to keep people at home. We want to help keep people out of urgent care and the emergency room,” Gundersen said.

MEDSPIRE’s clinic also offered to drop off supplies or shop for groceries for the elderly or high-risk residents. The clinic’s paramedic now operates as a shopper for patients of this demographic.

“If you’re elderly, the less contact you have with the public, the better. People who are 80 years old can’t go to six stores looking for flour, but we can,” Gundersen said.

Adventist Community Services of Greater Washington (ACSGW) operates many services for low-income families of Montgomery County, Maryland, including a free clothing closet, computer literacy classes, English-language (ESL) courses, and a food pantry. In light of the coronavirus pandemic, however, the only service the center has been able to run is its food pantry, albeit with some strain.

In recent years, ACSGW has operated one of the strongest food pantries in the Washington D.C. region, according to Kenneth Flemmer, executive director of ACSGW. While others in the area operate on a monthly basis, ACSGW has its food services available every week by appointment.

The center curates baskets with 30 pounds (about 13 kg) of food, which can usually feed a family of four for a week. The baskets contain pasta with pasta sauce or rice and beans, as well as canned or fresh vegetables, fruit, and a baked good.

As more businesses close in response to guidance issued by local officials, many families’ sources of income have been temporarily stripped away, leaving them in greater need of support.

“This past couple of weeks have seen about a 50 percent – sometimes 100 percent – increase overall in use of the pantry, with a third of clients being people who have never used the ACSGW pantry before,” Flemmer said. “[I believe] this trend is going to continue for some time.”

ACSGW is facing significant challenges, Flemmer said. If a member of his staff contracts the disease, the center will have to close. The center is also heavily dependent on volunteers, four of whom are elderly and unable to volunteer under the current restrictions. Others are able to come but only on an inconsistent basis. Despite the obstacles, Flemmer said, the center will continue to do all it can for as long as it can to help families in need.

“We got to do something even though we’re in a period of extreme isolation. We have to keep reaching out. We have to keep the network alive,” Flemmer said. “You can always pray, but you can’t stop there.”