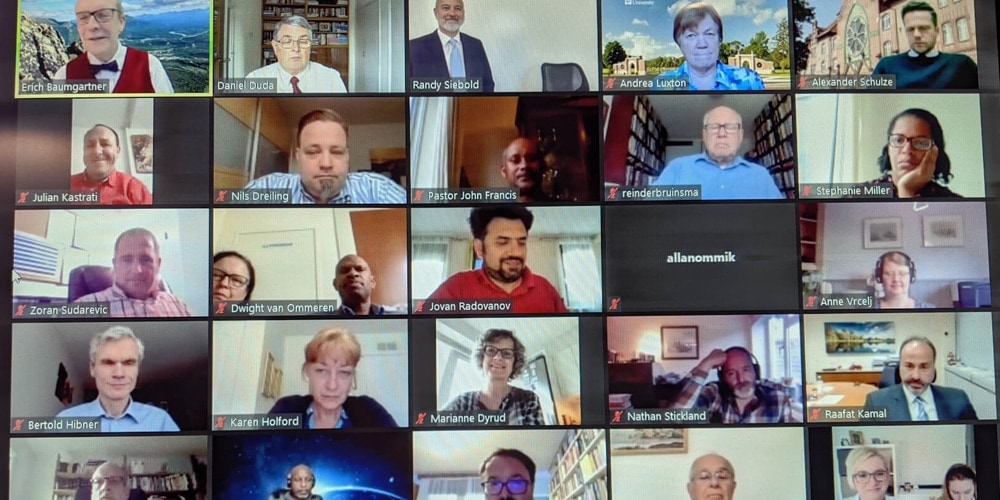 By: Trans-European Division, and Adventist Review

Over a four-year period, 35 Seventh-day Adventist union and conference leaders, along with some local pastors and an ADRA director, have focused on learning and developing new leadership styles under the European MA in Leadership program.

The course was offered by Andrews University (AU) through Newbold College of Higher Education in England.

To celebrate this milestone, a special closing ceremony took place on June 11, 2020, after the last intensive 10-day Zoom-mediated session. It was the last meeting of the 2016-2017 cohorts and an apt reason to celebrate what has been accomplished, according to program coordinators Erich Baumgartner and Randy Siebold of Andrews University.

AU president Andrea Luxton greeted the students and emphasized the necessity of adaptability in leadership. The online program then proceeded to show memories and pictures from students, teachers, and advisors.

“Keeping open conversations is of utmost importance for effective leadership,” he reminded the graduates.

John Baildam, Newbold principal, gave an overview of the program from its inception at a General Conference Leadership Seminar in Jerusalem some years back. He also reflected on previous cohorts from 1999. Some of the current leaders within the TED and beyond are graduates of those two original cohorts.

In his concluding remarks, TED education director Daniel Duda emphasized that leaders need to be agents of change and agents of hope. He quoted the apostle Paul in Romans 15:13: “May the God of hope fill you with all joy and peace as you trust in him, so that you may overflow with hope by the power of the Holy Spirit.”

Finnish Union of Churches executive secretary Anne Vrcelj, one of the graduates, said, “I have grown during this program as a leader and as a person. I am grateful to God, the Trans-European Division, and the Finland Union of Churches for this life-changing opportunity, and my fellow leaders for this journey!”

TED Family Ministries director Karen Holford confessed that she arrived to serve at the TED with minimal experience of leadership. “I knew that the learning curve would be steep.”

Despite the hard work, she is grateful she joined the program.

“The MA in Leadership has helped me to negotiate that curve and encouraged me to grow in almost every dimension as a leader. It has given me the courage and confidence to become the leader God is calling me to be. Now I have a backpack full of expanding competencies, a compass, and a road map, to guide me on my future leadership journey.”

Maja Ahac, head of advocacy for ADRA Europe, was next to share.

“At the beginning of my leadership journey, I made a decision: ‘Whatever was lost can be found. Whatever was broken can be mended. From now on, I will decide what kind of person I want to be,’” she said. “I decided who I want to belong to and who I want to be —  loving, wise, courageous, inspirational, kind. I chose courage over comfort. A female leader filled with God’s love and wisdom, ready to be a co-creator with God.”

“The leadership program has encouraged me to be more aware of the fact that God is using the blind sides of my leadership,” added Marianne Dyrud, recently elected as executive secretary in Norway. “I can detect that God is using me through who I am as a person, and that leadership skills and development is not a static sphere, but a constant stretching and learning area, where every day is an arena to be trained for leadership.”