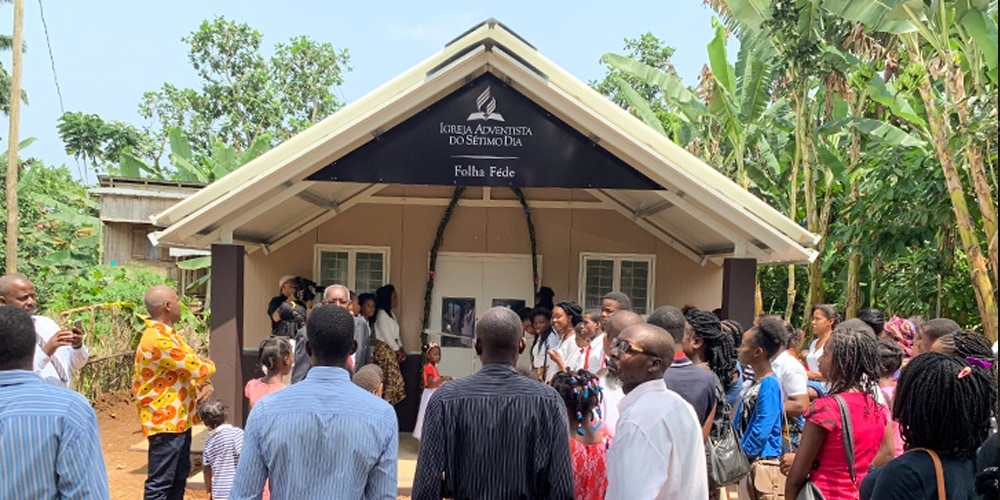 Standing room only was available during the dedication of the Fohla Féde Seventh-day Adventist Church building in the African island nation of São Tomé and Príncipe on January 19, 2019.

More than 100 people attended the ceremony at the new sanctuary, which was constructed by Maranatha Volunteers International as part of the recent effort to provide church buildings and school classrooms on the island of São Tomé.

The new space is a far cry from the old place of worship. Previously the Folha Féde congregation met in a patio space underneath a home. The dirt floors, lack of light, and crowded conditions made it a difficult place to worship. But it was the only option available.

The Folha Féde congregation started in 2017 when a team of young Adventists from a neighboring church organized evangelism meetings in the community. The program resulted in 10 baptisms and the formation of a small group that began meeting in the space under the house. Over time, the group increased to more than 100 members.

When Maranatha arrived in 2017 in response to a request for construction assistance from Adventist leadership in São Tomé, Folha Féde was on the list. Although they were a young congregation, the group was growing, vibrant, and engaged.

After Maranatha confirmed Folha Féde would receive a new church building, the membership got busy preparing their new property, located down the street from their old meeting space, for construction. For several days, members helped to level the land. From delivering loads of rocks to shoveling dirt, the members volunteered every spare moment they had to prepare for Maranatha’s crews to pour the foundation and build the church.

Finally, in January 2019, the new temple was completed. On the day of the dedication, the congregation met in their old church space, then marched down the street to their new place of worship, singing along the way.

Michelson Trindade, 25, is one of the people who helped to start the Folha Féde church. Having failed to secure a seat in the crowded sanctuary, he watched the ceremony through a window. He didn’t mind his view; he said he was happy to see the outcome of the congregation’s efforts.

Folha Féde is the fourth Maranatha church building to be completed in São Tomé and Príncipe since construction began in early 2018. Volunteers and crews have also completed eight classrooms and are currently building bathrooms at the International Adventist College — Cosme Mota, the only Adventist elementary school in the country.