‘Rise Up Against Abuse’ Rally Held at Andrews University 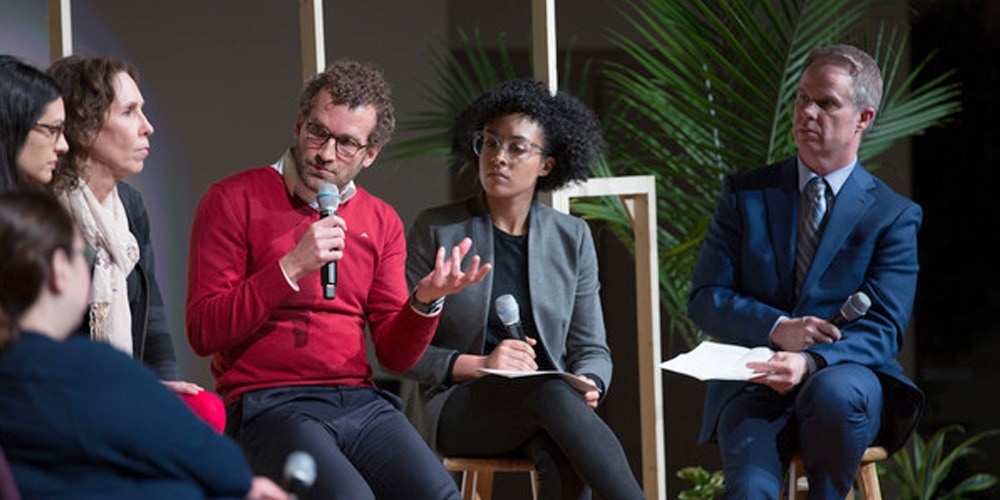 The first-ever Rise Up Against Abuse Rally was held on the campus of Andrews University in Berrien Springs, Michigan, United States, March 7-10, 2019. Sponsored by the campus offices of University Wellness and Diversity and Inclusion, the rally was the official launch of the new Rise Up Against Abuse initiative, designed to help people use awareness, education, intervention, and prevention to take decisive actions against all forms of abuse.

The rally began Thursday, March 7, at University Forum in the Howard Performing Arts Center with contemporary Christian singer/songwriter Sarah Kelly. Kelly sang her well-known “Take Me Away” and shared part of her story as an abuse survivor, detailing how she had poured herself into her music as a way of trying to stay safe and away from her abusive pastor husband. “Just like Paul and Silas I was in my prison, and I was choosing to worship God. I stood in the center of all the abuse, and I chose to worship God,” she said.

Following Kelly’s poignant presentation and mini-concert, attendees were invited to visit the Solidarity Wall, a temporary wall erected outside of the Campus Center for people to write messages of empowerment and support. Those who walked past the wall were each given a letter and a chance to take a marker and add their own message of encouragement.

The rally continued on Friday, March 8, International Women’s Day, with Jennifer J. Schwirzer, a private counselor, writer, TV program host and presenter from Orlando, Florida, who began the day with “Why Should We Rise Up?” Her topic mirrored the goals of the overall rally — to educate, listen, prevent, and confront. Toward the end of her presentation, she spoke about the power of multiplication, which is the power of both ministering to victims and equipping them to rise up.

Later in the day, Sarah McDugal, Andrews alumnus, author, speaker, and co-founder of Bucket Brigade Against Abuse and Women in Leadership Development (WILD), stressed the importance of being equipped with knowledge and truth in her presentation, “Truths About Abusers.” She emphasized that abuse is not a set of isolated mistakes but rather a systemic pattern of beliefs and actions. “You can believe some of what they say and everything they do,” she stated.

The Psalm 82 Initiative, a ministry team helping churches identify and deal with abuse for more than 15 years, shared about patterns of abuse. The goal was to equip people to recognize abuse patterns and offer help. Judith Fisher, director of the Counseling and Testing Center at Andrews University, and Nicole Parker, bestselling children’s author and biblical counselor, talked about recognizing abuse, focusing specifically on emotional and sexual abuse. The Psalm 82 Initiative closed with a final segment about identifying and addressing abuse in religious contexts.

After a Friday-evening song service, Latoya Wright, a Master of Divinity student at the Seventh-day Adventist Theological Seminary, read the Bible story of Tamar in 2 Samuel 13 and discussed how the ugliness of that story still happens today. She told her story of being a victim of sexual abuse and how that affected her life for years. In her poignant, raw testimony, Wright explained what she calls “the power of the ugly,” stating, “When God’s power overrides the ugly, that’s when it becomes the power of the ugly.” She implored the audience to let God take the ugly out of their lives and to let Him write their stories.

On Saturday (Sabbath) afternoon, well-known speaker Ty Gibson and Tacyana Nixon, assistant to the vice president for Campus and Student Life at Andrews University, hosted a two-part discussion panel. The first part dealt with questions and concerns related to the church’s involvement with abuse. Part 2 addressed the effects of abuse. Some of the questions raised included how to talk to children about abuse and how to minimize their chances of being abused.

The rally continued Sunday morning with an “Emancipating Survivors” workshop designed only for survivors of abuse and their supporters. Afterward, an “Equipping Defenders” workshop was held for any attendee interested in learning more about how to identify perpetrators, handle criminal abuse, and serve as a defender and healer for abuse victims.

Later, Scott Ward, assistant professor of discipleship and religious education at the Seventh-day Adventist Theological Seminary at Andrews University, shared how he survived abuse by diving deeper into a relationship with Jesus. His seminar focused on how to apply Scripture narratives to the negative experiences and how journaling and worship can draw people closer to God.

Organizers report that the event touched a number of people, including numerous abuse survivors. One attendee noted how her attendance at the rally came about. “I heard about the event from Sarah McDugal,” she said. “The day I called the national domestic abuse hotline and asked about my situation, a friend of mine connected me to Sarah. She started talking to me about how to build a safety plan, and I left the very next day.”

Another attendee and Andrews alumnus, Margaret Michel, works in hospital chaplaincy and with those on hospice. At her job, she has been exposed to numerous abuse victims. “Much of what they are saying are things that I have seen as I’ve interacted with people, and I’m glad that at this point, the church is saying these things here on campus,” she said. For Michel, events like this are crucial for raising more awareness about the prevalence of abuse, and she said that she hopes the university continues to hold events like this one in the future.

Dominique Gummelt, creator and co-founder of the Rise Up Against Abuse initiative, said she was thrilled with the success of the rally. “People were empowered through knowledge and education, and they were comforted by hugs, prayers, and words of encouragement,” she said.

The original version of this story was posted by Andrews University Campus News.

Letters
Inbox
Who Cares | Inspiring Issue | God Has Called You to Be the Bible to Non-Christians | Indianapolis Will Host 2030 General Conference Session
Release
Organization Honors Adventist Women Leaders
Association of Adventist Women acknowledges contributions from around the world.