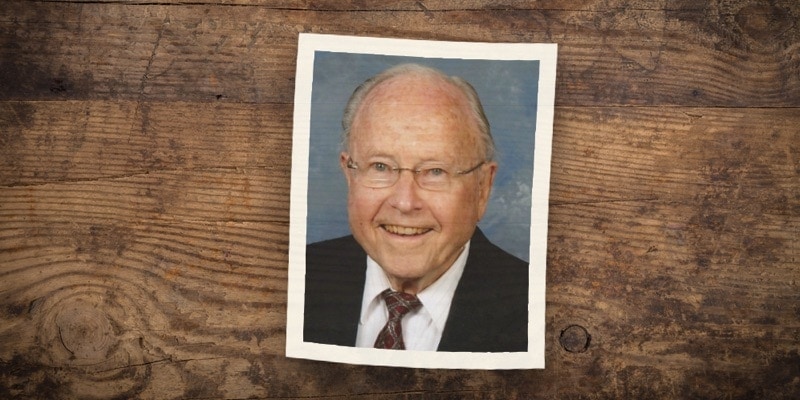 Clyde O. Franz, a retired Seventh-day Adventist Church executive who oversaw membership statistics and missionary recruitment for international outposts, passed away at age 104 on May 24.

Franz, who served as executive secretary of the denomination from 1970 to 1980, is remembered as an exemplary father and Christian man.

“Dad was an awesome father!” said his 76-old daughter Sue Smith in an email to Adventist Review. “His unconditional love for me has made it easy to understand the love of my Heavenly Father!” Smith also highlighted his optimism. “Dad always had a positive attitude,” she said. “He was amazing!”

Franz was born on March 1, 1913, to self-supporting missionaries in Camaguey, Cuba. In 1932, he earned an accounting degree at Southern Missionary College – now Southern Adventist University, in Collegedale, Tennessee, United States. It was there that he met the love of his life, Lois Mae Clark, and they were married on June 2, 1935, soon after graduation.

He went on to serve as secretary-treasurer of several Adventist territories, including Alabama-Mississippi, Kentucky-Tennessee, Iowa, and the British West Indies Union. In the 1950s, he served for two years as president in the Antillean Union, based in Cuba.

As secretary in the 1970s, he ran the department that was responsible for filling mission posts, an era before local leaders were appointed to most leadership roles.

“In those days, unlike today, our number one job was finding missionary recruits for divisions,” Franz said in an interview with Adventist News Network (ANN) when he turned 100 in 2013. “Nowadays divisions pretty much find their own personnel.”

In the same interview Don Yost, who worked for Franz as the founder of what is now the Office of Archives, Statistics and Research, said Franz was “very well organized, very congenial, efficient in doing the things that needed to be done. Just a very fine person to work with.”

When Franz turned 100, he shared that he didn’t have any secrets to longevity, other than being a vegetarian and living as a Seventh-day Adventist.

“Clyde has been a model for all of us when it comes to healthy living,” said his family in a statement read at a recent service to celebrate his life. Indeed, Franz kept his mind sharp and his body fit well after turning 100. Even after living a century, he would drive his car and walk for 2 miles (3 kilometers) every day, his family said. A treasurer at heart, his top hobby even at his retirement residence was managing his own finances in a spare bedroom he converted into a study, complete with computer and copier.

Franz, however, had another secret for a long and fruitful life. He believed observing the seventh-day Sabbath had helped him. “It’s healthful, but it goes further than that. When we take the Sabbath off, we’re serving God,” he once said.

Franz married three times, and each time he outlived his vow of “’til death do us part.” He says he enjoyed each marriage, but that after the third time, he decided he would remain a bachelor.

His daughter shared another of Franz’s secrets for a long life—his sense of humor. “He loved telling little jokes,” she said. “We will certainly miss his jokes, lively conversations, and quick wit.”

As for Franz himself, he was always aware of God’s guiding hand in his life. “I just can’t ignore the way the Lord has directed and led through all these years,” he said in the ANN interview four years ago. “I’ve been blessed beyond measure.”

Franz is remembered well and will continue to be appreciated by current world church leaders. “Clyde Franz was a marvelous administrator and people-person,” recalled Ted N. C. Wilson, president of the Seventh-day Adventist Church. “He had a great love for God’s Church and always a ready smile. We thank God for the longevity of 104 years and look forward to spending eternity with him in the very near future. We certainly will remember the Franz family in our prayers.”