Prison Outreach Offers Hope to Thousands of Inmates in Kenya 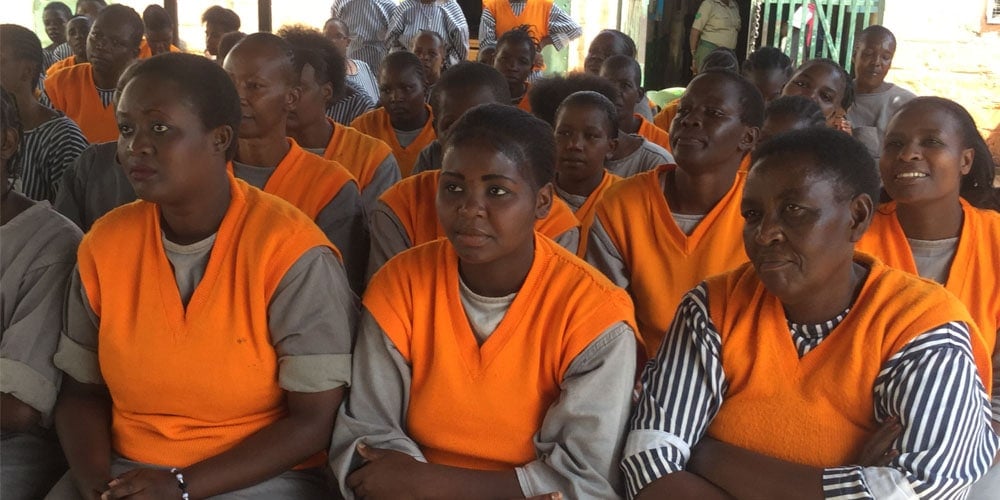 Kamirithu Seventh-day Adventist Church is located just about 40 kilometers west of Kenya’s capital Nairobi. It is a small church by any standard. With a membership of about 50, the church has probably little to write home about. But this is where Simon Ngigi Mbira fellowships every Sabbath. Born 42 years ago in Limuru near Nairobi to parents who were not Adventist, Simon drifted from the religious path of another faith where his parents were involved in crime and immorality.

“I did not have a church for many years,” he said in a recent interview. “I was never keen on going to where my parents worshipped.”

But how did he find himself in an Adventist church years later enjoying hope and redemption? Simon’s dark past saw him charged with murder and this took him to the thick and imposing walls of a Nairobi prison.

A Light Shone in Prison

“I stayed in prison for over two years as my murder case went on,” said Mbira. “It was a time for reflection on what type of life I wanted to lead. It provided me with an incredible stage to re-think and re-purpose my life.”

It was there that Simon came face to face with Adventists from Newlife Seventh-day Adventist Church in Nairobi, which runs a Sabbath School in the prison. “Before I went to jail, I had heard of the Seventh-day Adventist Church, but I knew nothing else about it until I met David Ogega and John Oduka who ministered to us every Sabbath while in prison,” said Mbira, who is now married with two children.

Although he is now out of prison on bail as he fights the murder charges, which have now been reduced to manslaughter, Mbiri said he will forever be grateful to Newlife’s prisons outreach program which saved him and his family.

“After attending several Sabbath School sessions led by Dickson Kateeti while in prison, I gave my life to the Lord and was baptized in May 2015. I will remain greatly indebted to this church and for the constant efforts by prison’s chaplain Ageline Akoth,” said Mbiri. After his baptism, Mbiri convinced his wife and other family members to become Adventists. They are now attending the Kamirithu church.

Out of Trickery and Deceit

Almost 200 hundred miles (300 kilometers) from Limuru, on the shores of Lake Victoria in western Kenya, David Odhiambo Owino shares a similar experience. The 54-year-old living with a disability is also a beneficiary of the prisons outreach program which he said has opened for him a life of new possibilities.

“I was sentenced to one year and two months for a traffic offense because I lived a life of trickery and deceit. But while in Nairobi’s prison, I came across the Newlife Sabbath School program which I decided to join,” he said.

Owino, who is married with two children, said that while attending Sabbath School, he decided to become an Adventist.

“When I met Adventists in prison, I decided to become one because the church stands for truth,” said Owino. I am now a free man serving the Lord since my baptism in March 2017.”

The Newlife prison initiative was launched in 2012 with the main goal of evangelizing and supporting the inmates to lead more productive lives after prison as committed Christians. “Over the last five years or so, this program has ministered to over 2500 inmates, and out of this number, about 1000 of them have been baptized,” said Ogega.

Also, Kateeti explained that the transformative impact of this prison ministry has been amazing. “Currently, the Sabbath School has more than 400 members,” he said.

Born in 1987 as a result of an evangelistic campaign conducted in Nairobi by evangelist Calvin Rock, Newlife has grown leaps and bounds to become one of the biggest churches in East and Central Africa, with a membership of over 4,500. As a result, a dozen churches have been born out of Newlife. The church is also nurturing several Sabbath schools and chaplaincy Sabbath schools in high schools.

Many faithful describe Newlife as a great symbol of promise for the future of the Adventist Church in Africa. Its moving stories of resilience, courage, and hope from the hundreds of inmates who have benefitted from the prison Sabbath School program continue to leave an indelible mark on the role of the Seventh Day Adventist Church. It is a church that offers an anchor of hope and promise