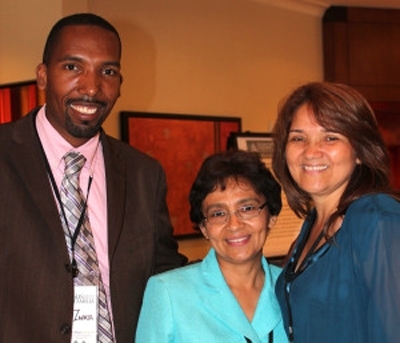 When a teacher asks a student
to stay after class, it’s not generally good news. But for Claudia Pretel, who
teaches a GED class for Spanish speakers, this was her chance for
ministry. After class, the gentleman was apologetic and expected to be
reprimanded as he had not been paying attention in class and had not done well
on the homework. Instead, Pretel told him she was worried about him and asked
if she could pray with him.

“He started crying,” she
recalled. “He told me that his wife was dying. I asked him if I could hug him.
The Holy Spirit gave me the words to talk to him. I told him that God loves him
and his wife. I prayed for him, shared with him a verse from the Bible, and
told him to buy his wife flowers and tell her that he loved her.”

The man said he had been in
the United States for 18 years and no one had ever spoken to him the way that
Pretel had. At the next class, the gentleman was smiling. He had good news. The
doctor told them that his wife would be fine. She had improved so much that she
was even able to join him at his graduation ceremony.

These are just some of the
stories that Pretel hears every day while she carries out this ministry that
God has laid on her heart. Pretel, whose husband Olives Villamizar
pastors Potomac Conference’s Bristow, Culpepper and Bealeton Spanish
churches in northern Virginia, has gotten her family involved in this ministry.
Pretel, who was a teacher in her native Colombia, along with members of her
husband’s churches started their first GED or high school diploma equivalency
program in 2012. They knew that education was one way they could help
Spanish-speaking immigrants get better jobs.

“I now have former students
doing their college degrees or technical studies,” Pretel says proudly. “I also
have two starting their own companies but most see increases in their salaries
because they now have their diplomas and can have a little bit of a better
life.”

But Pretel and the other
volunteers do more than give students the skills that will serve them in the
workplace. They see teaching the classes as an opportunity to share Christ with
their students, some 80 percent of whom are Roman Catholic. “When someone is in
need, my husband and I will go look for them, pray with them, give them Bible
studies. We believe this is a good way to open the doors to our [Seventh-day
Adventist] community and share the gospel just like Jesus did. We hope that our
students will become interested in following Him.”

The group now has classes at
churches in Manassas, Charlottesville, and Culpeper, Virginia, as well as a
class in Hyattsville, Maryland, and they are mostly self-funded with some help
from her husband’s churches and from a negligible fee charged to students.
Pretel works with about 10 volunteers and they carpool to the different
locations to teach classes most nights of the week. Her daughter, Suranny who
is a registered nurse, teaches the science classes. Yair Zapata, a member of
the Culpeper church who holds a bachelor’s degree in engineering, teaches the
math classes. They start the class with devotional, songs of praise, and
prayer.

“The program opens doors for
students to have their GEDs,” Zapata says. “With the help of the Lord we are trying
to help as many people as possible.”

Some 58 students recently
graduated from the program. The group is now in the process of registering new
students. This year’s program will be a bit more of a challenge as the GED
tests will now be taken on computers. Pretel is seeking donations for
computers, and says that since she has already seen many miracles in this
ministry, she is confident God will come through with the needed computers.

For more information on how
you can help, contact Pretel at [email protected].