Over 1 Million Baptized in Inter-American Division 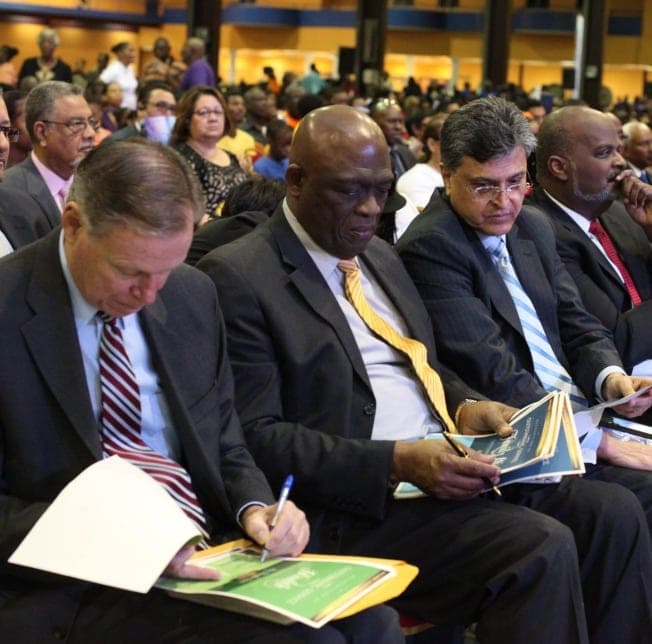 More than 1 million people have been baptized across the Caribbean and Central America as part of a five-year initiative that has not only enlarged the Seventh-day Adventist Church but also invigorated local church members to fulfill Jesus’ commission to make disciples of all nations, church leaders said.

The Vision One Million program — which sought to reach 1 million people in the church’s Inter-American Division — culminated on Saturday night, April 4, with a three-hour worship service broadcast live via satellite from Port-of-Spain, Trinidad.

Division president Israel Leito told an audience of more than 7,500 church leaders, members, and visitors gathered at the Center of Excellence auditorium that the church was growing rapidly because God was blessing efforts to mobilize church members into action.

“Vision One Million has refocused the church on evangelism and soul-winning, encouraging the church to go beyond the limitations or impossibilities they see around them for the gospel,” Leito said.

While the 1,000,017 million baptisms is significant, the main focus of the initiative has not been on numbers but the effect of discipleship on local church members, which in turn yields numbers, he said.

The division’s Caribbean Union, for example, doubled evangelistic efforts on its 24 islands over the past three months with the assistance of evangelists and other preachers from across the division. As a result, more than 6,000 people have been baptized, a number similar to all of 2014, said Caribbean Union president Kern Tobias.

“This has been one of the grandest evangelistic undertakings done in our region in years,” Tobias said. “This initiative really boosted our pastors and church members to see that it is possible to continue drawing decisions for Christ.”

The Inter-American Division, which encompasses 37 countries, is among the fastest-growing territories of the Adventist Church, with 3.67 million members today compared with 3.4 million members when Vision One Million started in 2011. Although the numbers indicate a growth of only 200,000 members since 2011, the division has been conducting a strict audit of its books for the past three years that has revealed more accurate membership figures. Some 380,000 people were removed from the books last year alone, including 120,000 members who moved to other regions.

The Adventist Church has about 18.5 million members worldwide.

More than 70,000 people have accepted Jesus in mass baptisms in Nicaragua, Panama, El Salvador, and the Dominican Republic in the Inter-American Division as a flurry of evangelistic campaigns wrapped up in the first three months of 2015, said Balvin Braham, the division’s associate ministerial director and the main organizer of Vision One Million.

“This initiative has brought a spirit of collaboration among our church leaders and members across Inter-America and has pushed us to look ahead to advance in creating a paradigm to sustain our growth and deepen our evangelistic impact in the months and years to come,” Braham said.

Saturday’s program — broadcast on the Hope Church Channel, Esperanza TV, 3ABN, 3ABN Latino, and the division’s webcast channel — featured live feeds of hundreds of baptisms from 14 sites as church leaders from each union prayed over the baptisms in Trinidad.

Evangelist Mark Finley, delivering the keynote message, praised pastors and church members for sharing Jesus and encouraged those preparing for baptism to keep their faith.

“When you step out in faith, Jesus works unexpected miracles in your life,” he said, adding moments later, “God is a God of unexpected blessings, a God of impossible possibilities and a God of new beginnings.”

A new beginning was just what Joseph Matieriene, 63, of Sangre Grande, Trinidad, said he needed. Dressed in his blue baptismal robe, barefoot, and estranged from his family, he said he was ready to leave a troubled life that included a 14-year prison sentence. He was released last year.

“I’m not a very educated man and don’t have much of anything, but I discovered God’s grace while reading the Bible,” Matierene said.

Although he had been baptized into a Christian denomination earlier on in his life, Matieriene accepted an invitation to attend an evangelistic series in his neighborhood and became convinced to observe the seventh-day Sabbath.

“I want to go to heaven and bring others, too,” he said.

Melissa Williams, 29, and her two young daughters were clinging to one another as they waited to be baptized. Williams joined the church when she was 16 but later left. After having her girls, now 10 and 7 years old, she started bringing them to the Sangre Grande Adventist Church even though she wasn’t following the Bible in her own life.

But then her daughters that they wanted to get baptized.

“The girls decided to give their life to Jesus and that moved me to leave my past behind me and be baptized once again,” Williams said.

“Jesus is life to me. My Savior and strength, he is everything,” said Williams, a fourth-year nursing student. “I just want to serve Him to the fullest and keep praying that my husband will soon want to give his heart to Jesus.”