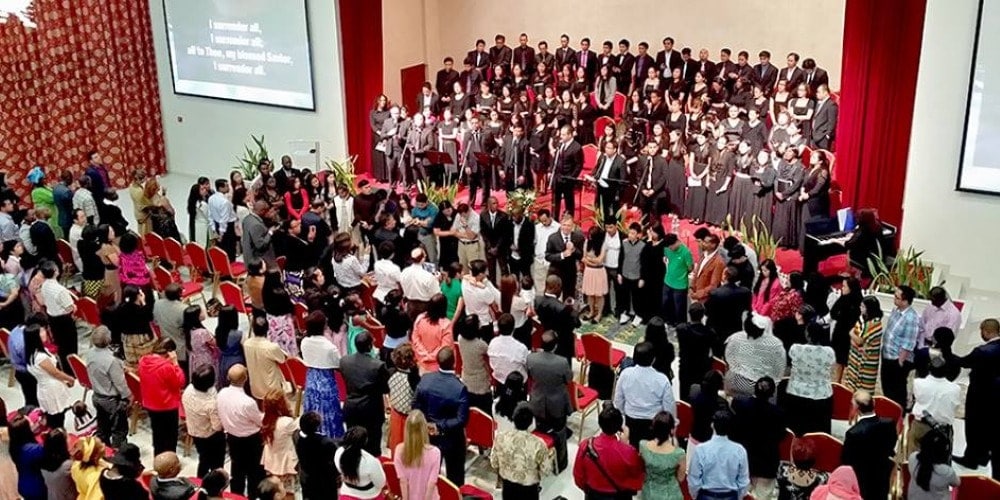 Camp meetings are an Adventist tradition that stretches back to the movement’s roots in the 1840s. So it should come as no surprise that scores of Adventists in Arabian Gulf countries also gather annually for several days of worship and fellowship.

Finley reminded believers gathered in a hall at the Adventist Church’s Gulf Field headquarters in Ras Al Khaimah, United Arab Emirates, that God’s door of mercy remained open to all, including people in the Arab world.

“If you ever wonder whether the door is open for you — no matter what you have done, even if you have been unfaithful, or have compromised here and there — Jesus is saying to you in Revelation 3:8, ‘I have set before you today an open door,’” Finley said. “There is still a chance for you. Don’t give up.”

Mike Tucker, speaker and director at Faith for Today television, and his wife, Gayle, led a series of “Mad About Marriage” seminars aimed at strengthening the marriages of believers in the region.

Camp meetings have long been an anticipated annual event for Adventists, offering a time of spiritual nourishment and revival in the regions where they live. The first camp meetings, influenced by similar Methodist meetings, were organized by early Advent leaders to proclaim Jesus’ expected coming in 1844.

The turnout at the United Arab Emirates camp meeting represented a majority of the Adventists in the region.

The Adventist Church has 1,493 members worshiping in 14 churches and three companies in the seven countries that comprise the Gulf Field, according to the Gulf Field. The figure reflects a year-on-year gain over slightly more than 100 members.

“I am sure our members will be drawn closer to our Lord and Savior Jesus Christ as a result of the powerful messages shared during this camp meeting,” he said.