One of My Kidneys for Dad 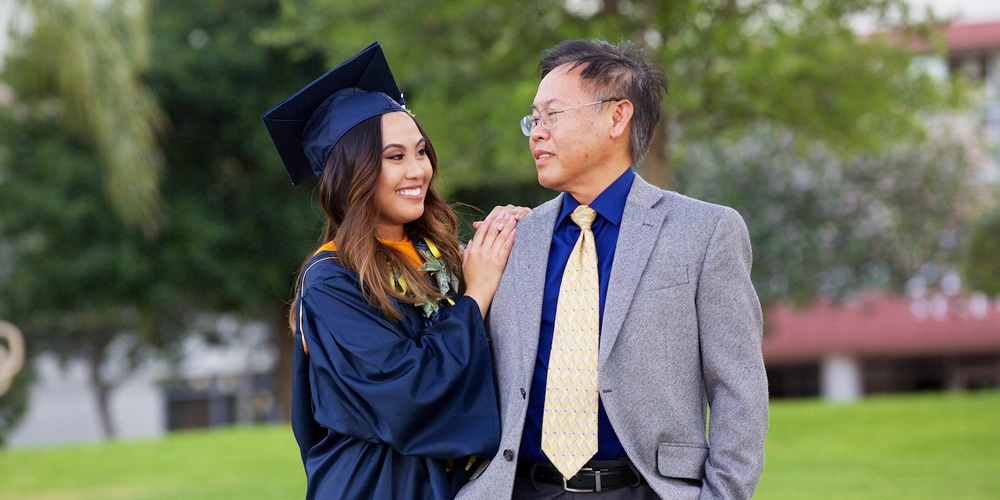 It was a potentially life-altering decision, but for Megan Malingkas there was no alternative—she would do whatever it took to help her father regain his health and lead a good life.

During Christmas break this school year, the La Sierra University senior health sciences major underwent surgery at Scripps Green Hospital in San Diego during which one of Megan’s healthy kidneys was removed and transplanted into her father, Moody Malingkas who had been diagnosed with end-stage renal kidney failure a year earlier. He endured daily dialysis for four months leading up to the surgery, and without the donation of Megan’s healthy kidney, the hours-long, blood-cleaning and chemical stabilizing treatments could continue indefinitely.

Doctors confirmed Megan as a transplant match for her father in May 2016 after Megan, her two sisters, Maureen and Mona, and other family members were screened as potential donors. Following a delay due to a bout of worsening health for Moody, surgery was performed on Jan. 3 this year. Two months later Moody’s kidney functions had returned to normal.

On June 18, the Malingkas family celebrated Moody’s renewed health and Megan’s unselfish gift to her father as they gathered at La Sierra University, a Seventh-day Adventist-operated school in Riverside, California, United States, to observe both Megan’s graduation and Father’s Day which fell on graduation Sunday this year.

When Moody was diagnosed with kidney failure, he had been placed on a five-to-seven-year waiting list without guarantee of a donation. Megan researched everything she could on his condition and discovered that without a kidney transplant, her father would be tethered to a dialysis machine several hours a day, every day, for the rest of his life.

“My sisters and I knew that this was not the life we wanted for our dad. We wanted him to be able to hang out with us at night and not be stuck to a machine at home,” she said.

“Both of my parents actually told us not to do this and that they didn't want [us to donate] one of our kidneys just in case something happened to us in the future,” Megan said. “My blood was tested probably 15 times in the span of two months, but I knew that it would all be worth it. The idea of not donating my kidney never crossed mind.”

The day of the surgery brought jitters. “The only surgery that I've ever had before was for my wisdom teeth,” said Megan. “I've never even been hospitalized before, so I was expecting the worst.”

That morning Megan went to her father’s hospital room, asked if he was ok, then cried because she was afraid she might not see him again, Moody recalled. He told her she didn’t have to go through with the transplant, but Megan insisted, Moody said.

The surgical procedure proved far less arduous than Megan expected. “Everything went extremely well and I can say that this experience has further enhanced my passion for working in the healthcare field,” Megan said.

The Role of the Local Church, School

For the Malingkas family, their difficult ordeal has challenged and strengthened their long-standing faith as Seventh-day Adventist Christians.

“When I got this disease, I brought it up to the church,” said Moody who is an elder at the Victorville Seventh-day Adventist Church. “The elders, the pastors, they were all praying for me. I was thinking maybe God didn’t listen to me, but I can see the process. God heard my prayer. When things happened, they happened quickly. Everybody was so happy when they learned the prayer was answered.”

“This was a big decision and I couldn't have done it without my faith,” added Megan who attends Crosswalk Church in Redlands. “I knew that if it was in his [God’s] will, he would make it happen. If I wasn't meant to do this, he would let me know. I turned to him when my dad was first diagnosed sick. Throughout the whole process I looked to him. When my dad's health was unstable and the process couldn't move forward, I remember praying to guide us through this time. When we got the green light for the surgery, we prayed again for his continuous blessings.”

Megan also expressed gratitude for the support she received from her La Sierra University colleagues in the accounts and loans office where she worked and in other departments, and from professors and friends who helped in various ways including assisting with walking up stairs to go to classes and with getting in and out of her car after the surgery. “Many people sent loving and thoughtful texts and prayers for me before and after my surgery just to tell me they were thinking of me and my family. It was some of the best things to wake up to,” she said.