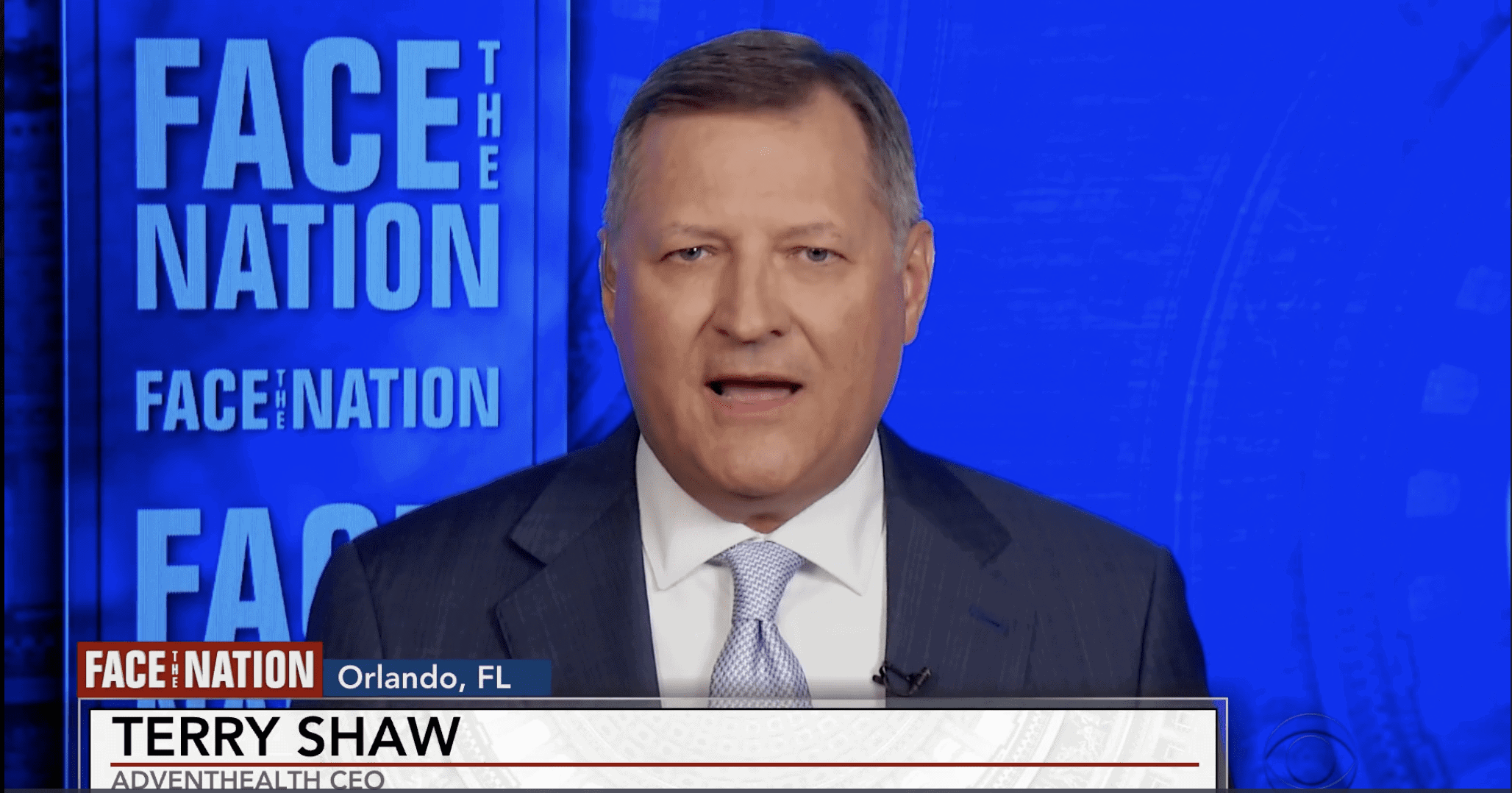 In a national television interview aired live on July 12, 2020, AdventHealth CEO Terry Shaw stressed the hospital network’s thorough preparations and the quality of care of the teams he leads during an unprecedented surge of COVID-19 across the U.S. state of Florida and beyond.

In a live interview on the longstanding Sunday CBS News show Face the Nation, Shaw focused on the proactive actions AdventHealth has taken as he lavished praise on what he called the “amazing job” of the organization’s clinical teams.

“I’m thankful that we’ve had several months to learn how to treat the disease,” said Shaw when reacting to host Margaret Brennan’s question on the current state of preparations. “We are much better prepared in July than what we were in March. We have adequate personal protective equipment [PPE]. We have a stockpile of ventilators, and we have an amazing clinical team that has taken best practices from around the globe and put them into our treatment protocols.”

Shaw went on to explain that following those strict protocols, the number of COVID-19 patients in intensive care units across the dozens of AdventHealth hospitals in Florida has been cut in half. The same can be said about the number of people coming to AdventHealth hospitals who need a ventilator. “And because of those things, our death rate has also been cut in half in that time,” he told Brennan.

When asked about the peak of hospitalizations, Shaw said he believes that Florida hasn’t reached the peak yet. He called people to follow advice about wearing masks and keeping social distancing. “COVID gets passed from one person to the next, and we can all do a better job making sure that we are caring for one another by just wearing a simple mask and staying 6 feet [2 meters] from a distance perspective from the next person,” Shaw advised.

Shaw made clear that the positive results AdventHealth is currently achieving are not the result of chance. AdventHealth teams learned all they could to develop and improve their protocols but were also supported by the organization’s early commitment to get ready.

“In March and April, we spent an enormous amount of money on PPE, and we continue to stockpile PPE that we so desperately need right now,” Shaw said. He added that AdventHealth is getting shipments of broad-spectrum antiviral medication Remdesivir, so they “have enough to continue to care for people.”

During the July 12 show, which included interviews with U.S. Surgeon General Jerome Adams and others, Shaw emphasized the multistate nature of Adventist health care. He said they are working with institutions in Colorado to bring clinicians to support Florida’s staff needs. This is critical to keep the level of care, he said.

“It’s very important that you have the ability to move staff around within the state,” Shaw said. “[We developed] a staff redeployment program that allowed us to move critical resources around our organization, both within the state of Florida, and from out of the state to Florida, or vice versa, based on where spikes were coming, and where people would be needed the most.”

Every move, Shaw emphasized, was made to focus on how to better care for people.

Shaw’s interview took place on the same day Walt Disney World Resort near Orlando, Florida, opened its doors to the public after weeks of closings. Many experts wonder whether this was a wise decision at a time when cases have skyrocketed in the area. AdventHealth is providing advice and support to Disney’s plan for reopening. Brennan’s last question to Shaw sought to get his take on it.

“As a health-care provider, my job is to help people do things safely,” Shaw answered. “Based on the way Disney is approaching this, limiting people in, doing all the screenings that they are doing … I wouldn’t hesitate to go to Disney as a health-care CEO, based upon the fact that they are working really hard to keep people safe.”

Adventist Review executive editor Bill Knott said that he enjoyed the interview. “I appreciated Shaw’s responses that explained clearly the hospital system’s need for careful planning, as well as the importance of strategic deployment of needed personnel around the [AdventHealth] system.”According to Knott, Shaw handled the questions and issues with confidence.

Face the Nation is a weekly U.S. news program airing Sundays. Created in 1954, it is included on the list of the longest-running news programs in the history of television. It usually features interviews with prominent officials, politicians, and authors.

With their stated mission of “Extending the Healing Ministry of Christ,” AdventHealth employs more than 80,000 people in almost 50 health-care facilities across twelve U.S. states. According to the health-care network website, the organization’s mission is to be Jesus’ hands and feet in helping people to become whole.

It adds, “Our story is one of hope—one that strives to heal and restore the body, mind, and spirit.”