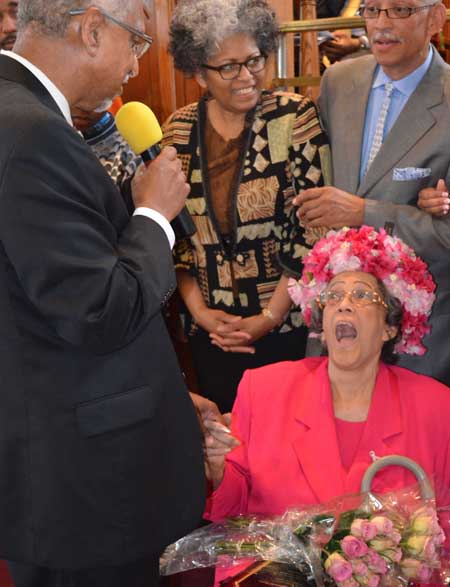 The company that grew into Coca-Cola was incorporated in
Atlanta, Georgia. The Eiffel Tower opened in Paris. The Dakotas, Montana and
Washington became U.S. states.

And the first Seventh-day Adventist church opened in
Washington D.C.

Last weekend, the First Church celebrated its 125th
anniversary in a renovated sanctuary that it said was made possible by months
of faith, financial commitments and prayers.

Senior Pastor Roland J. Hill invited church members during the
celebratory worship serves on May 17 to recite the church’s slogan aloud: “I’m
on a mission for the master to produce seed for the kingdom. It’s bigger than
me!” The slogan comes from Eliezer in Genesis 24 who prayed, “Oh, Lord God of
my master Abraham, please give me success today and show kindness to my master
Abraham.”

“The slogan reminds the church of its past influence on the
present generations, while challenging current members to view their lives and
church work as bigger than themselves,” Hill said. “Their lives will affect
future generations.”

First Church also presented its longest-serving member,
Betty F. Gillis, 89, who joined the church 77 years ago, with a plaque and
flowers. Over the years, Gillis has served as the organist, assistant choir
director, music director and assistant Sabbath School leader.

Ahead of the anniversary celebration, members spearheaded a
125-day initiative that saw them fundraise and renovate the sanctuary. The
renovation include installing three-and-half bathrooms and new carpeting,
redoing tile in the foyer on the main level and upstairs in the mezzanine
level, putting in two new rooms in the balcony, redoing the steps coming into
the church, and reupholstering and refinishing the pews.

After worshiping in a nearby Baptist church during the
renovations, last weekend was the first time in about two months that members
were able to worship in their own facility at 810 Shepherd Street, northwest.

As part of the anniversary, Douglas Morgan, a history
professor at Washington Adventist University in nearby Takoma Park, Maryland,
released a limited edition book titled “Miracle of
Courage, Color and Christ—The History of the First Church of Seventh-day
Adventists.” Proceeds from the book will finance further
renovations, including the installation of an elevator and a fourth floor.