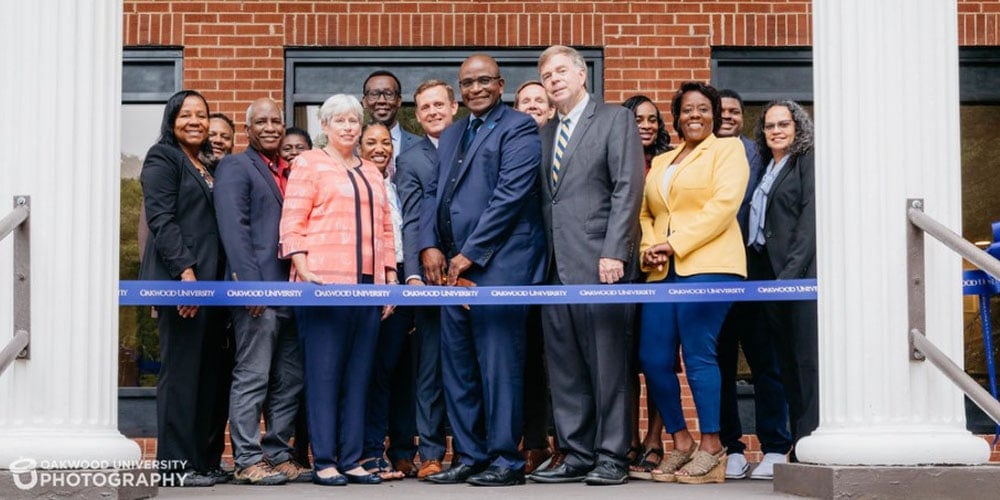 On the morning of July 19, 2021, Oakwood University, a Seventh-day Adventist school located in Huntsville, Alabama, United States, held a ribbon-cutting ceremony to celebrate the completion of the Peterson Hall renovation. The building now includes residential areas as well as offering a full conference center.

Oakwood University president Leslie Pollard was on hand to cut the ribbon for the Peterson Hall and University Conference Center, along with Tommy Battle, Huntsville mayor, Matthew Massey, president of Alabama School of Cyber Technology and Engineering (ASCTE), and members of the Oakwood University and ASCTE administrative teams.

Constructed in 1955, Peterson Hall is named for Oakwood’s second African American president, Frank L. Peterson (1945-1954). One of the grandest buildings on Oakwood's campus, the design of Peterson Hall is reminiscent of traditional Southern-style architecture. According to leaders, the large columns and grand staircase at the entry remind visitors of Oakwood’s rich history.

The “E”-shaped structure, originally completed in 1955, featured student rooms for approximately 170 students, a second-floor chapel, staff offices, an infirmary, two deans’ apartments, and an expansive ground-floor recreation hall. Although constructed at the outset to serve as a residence hall for freshmen students, Peterson Hall has also served as temporary office space as recently as 2011.

Renovations are the result of collaboration between Oakwood University and ASCTE, leaders said. As of July 2021, it is now called the Peterson Hall Residential and Conference Center. Beginning in August 2021, ASCTE students will occupy the building for the 2021-2022 school year. The facility will then be used as a conference center for out-of-town guests of the university.

“For a number of years, we have dreamed of the day when we could bring forward a renovated and modernized Peterson Hall as a state-of-the-art residential facility. However, our hopes have been exceeded [beyond] our dreams,” Pollard said. “In 2021, we open Peterson Hall as both a residence hall and a conference center — a first for our Oakwood campus. What a way to celebrate our 125th anniversary! God be praised,” he added.

Pollard shared that Oakwood University has spent more than US$60 million in new constructions and renovations in the past 10 years. “With the matchless support of our donors, we will renovate and modernize our other facilities, just as we have done with Peterson, Cunningham, and Carter,” Pollard said, referencing recent projects on campus.

Similar to its original purpose in 1955, the renovated building is designed to give its residents comfort, modern convenience, and proper study environs, leaders reported. The updated facilities will include 52 private rooms, four suites, meeting rooms, an auditorium, a business center, laundry, vending areas, a Swedish-style sauna, and an exercise room.