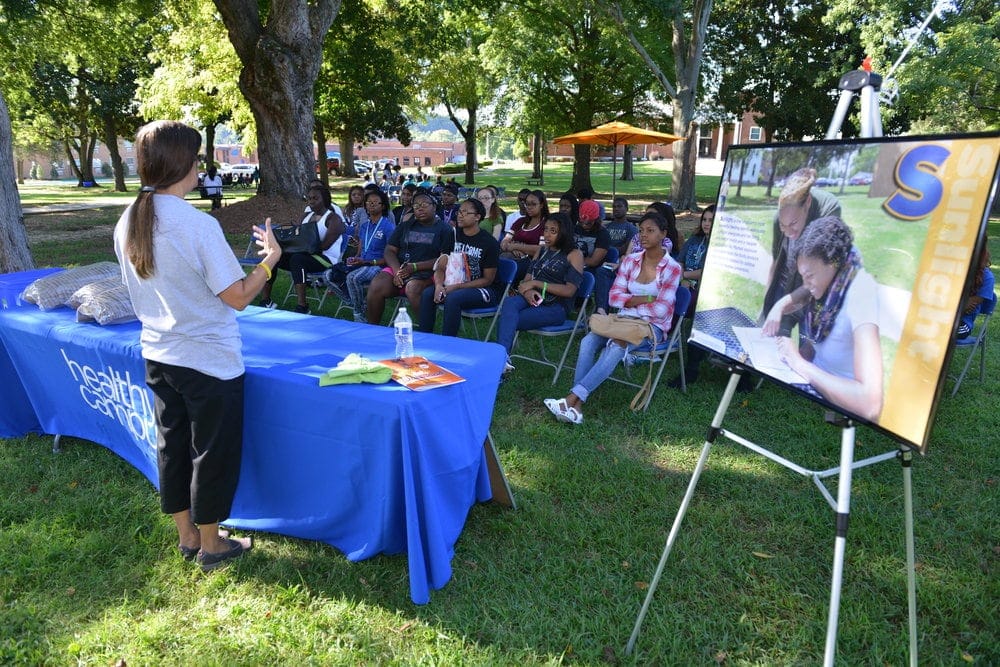 Oakwood University kicked off the academic year with an ambitious plan to become the healthiest campus in the United States — and to become an Adventist beacon of light in sharing good health practices in the world’s big cities.

The Seventh-day Adventist-owned university in Huntsville, Alabama, has revised its curriculum to incorporate the eight laws of health backed by the Adventist world church’s health ministries department: sunlight, temperance, adequate rest, nutrition, drink water, outdoors, use of physical activity, and trust in God.

“This represents the restoration of holistic education, which is becoming harder and harder to implement in the modern world,” university president Leslie N. Pollard said in an interview Tuesday. “We reworked the curriculum to include the principles of the eight laws of health not just in one health class but across the system.”

The program, called Healthy Campus 2020, began with a health assessment of the incoming freshman class this month. The more than 300 new students were asked to engage in basic exercises, and health professionals checked their blood pressure, hemoglobin, and even psychological outlooks to create personalized health transcripts.

The transcripts encourage students to start thinking about their health by giving them an understanding of their current well-being, Pollard said. Students will be checked every year and given updated transcripts.

During their studies, students also will be trained on the eight laws of health, which Oakwood has arranged into the acronym, STAND OUT. Other Adventist organizations have used other acronyms, such as CELEBRATIONS at the General Conference’s health ministries and NEW START at the Weimar Institute, for the same eight laws.

Oakwood hopes that students will become more accountable for their health and, more important, leave the university equipped to share what they have learned in their communities.

The new health program is the university’s reply to Mission to the Cities, a major initiative of the Adventist world church that seeks to share Jesus in the world’s biggest cities by meeting people’s physical and spiritual needs.

“Healthy Campus 2020 is our response as a historically black university to the top four conditions affecting the black community,” said Prudence Pollard, vice president of Oakwood’s research and employee services.

Pollard, who is married to Leslie Pollard, identified the four as diabetes, obesity, cardiovascular disease, and hypertension and underscored that all are preventable.

Other Adventist and non-Adventist universities offer healthy lifestyle programs, but they tend to be single pronged and focus primarily on student obesity, according to nationwide research conducted by Oakwood. Those programs encourage students to be more physically active by visiting the gym and distributing free water bottles and towels.

“No one else is doing what we’re doing,” Pollard said.

As part of its health initiative, Oakwood will become the first university in Alabama and the first Adventist university to join U.S. first lady Michelle Obama’s Partnership for a Healthier America, a nonprofit organization that fights childhood obesity.

Peter N. Landless, director of the General Conference’s health ministries, said he was delighted to see Oakwood University embrace comprehensive health ministry, pursuing health and wholeness for the students, faculty and personnel, as well as reaching out into the community, especially the cities.

“There are huge health needs and disparities especially in urban areas as the majority of the world’s population now lives in the cities,” he said.

Oakwood students have praised Healthy Campus 2020 in interviews with local television and other media.