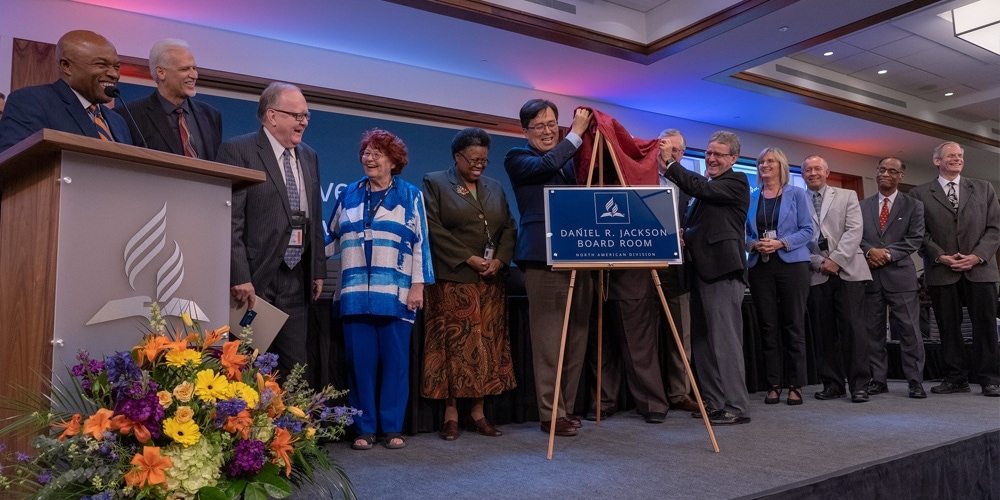 Daniel R. Jackson, president of the North American Division of the Seventh-day Adventist Church (NAD), and his wife, Donna, have announced their intent to retire, effective July 1, 2020.

With the postponement of the 2020 General Conference (GC) Session until 2021, the NAD administration has worked with world church leadership to establish a process for the election of the new NAD president in July 2020.

The Jacksons have served at the NAD headquarters since his election in June 2010 at the GC Session in Atlanta, Georgia, United States. He was re-elected president in 2015 at the GC Session in San Antonio, Texas. Before coming to the NAD, Jackson served for eight years as the president of the Seventh-day Adventist Church in Canada.

“Serving has always been a privilege,” Jackson said of his career working for the church. “The real privilege of all this has been meeting with our people from coast to coast, throughout the North American Division — in Canada, the United States, Bermuda, Guam, and Micronesia. To meet with our people — the perk of the job is to see the wonderful mission focus that many, many of our members have. This division is about mission.”

Except for five years of service in the Southern Asia Division, Jackson, a native Canadian, has lived and ministered entirely in the North American Division. He graduated from Canadian Union College (now Burman University) with a B.A. in theology, and also earned an M.A. in Religion in systematic theology from Andrews University.

During his career, Jackson has served the church as a pastor, teacher, and administrator. Jackson and his wife, Donna, enjoy the three children and four grandchildren the Lord has given them.

But foremost in his experience, Jackson said, is that he’s a fellow traveler on the same path as every Christian headed toward God’s kingdom.

“I’ve always held the idea that God would move us into this role in great reverence,” Jackson added. “I have not enjoyed every day, and I've said this plainly, … but it is the people that make the job very rich, and a huge blessing. I deeply respect and revere what God is willing to do in the life of a scamp from Edmonton, Alberta, and a wonderful woman from Sidney, British Columbia.”

Donna Jackson has served the NAD as Ministerial Spouses leader and NAD field assistant in the NAD Ministerial Association. Previously, she held the position of Family and Women’s Ministries director of the Ontario Conference of Seventh-day Adventists and the Seventh-day Adventist Church in Canada Women’s Ministries liaison coordinator for eight years.

“I’ve been very fortunate to work in the Ministerial Association with an energetic team,” Donna said. “My special task has been ministerial spouses and their families. I have a special heart for the new spouses coming into it — a neat part of being the president's wife is meeting all these people. I wouldn’t know them otherwise.”

Born and raised on Vancouver Island in British Columbia, Canada, Donna’s worldview was stretched by living in the United States, Sri Lanka, and India — and by serving on short-term projects in Somalia, Ethiopia, and Kenya. Donna was educated at Canadian University College (now Burman University) and Spicer Memorial College in India, earning a bachelor’s degree.

In compliance with GC by-laws and working policy, the NAD administration has worked with GC leadership to establish the process for the election of the new NAD president. All world division executive officers serve as elected officers of the GC, and their nomination and election by the region they represent must be approved by the GC Executive Committee.

The NAD nominating committee will meet on July 6 to select a name to be presented and voted on by the NAD Executive Committee on July 7 and sent as a recommendation to the GC Executive Committee. Both of these committees will be chaired by Ted N. C. Wilson, GC president. The meetings will be held virtually via video conference, and a previously used electronic voting process will be utilized.

On July 9, the GC Executive Committee will meet virtually to receive the recommendation and elect the new NAD president.

As the process for a new NAD president starts, church leaders are asking members to lift up in prayer the proceedings and those involved in the transition.