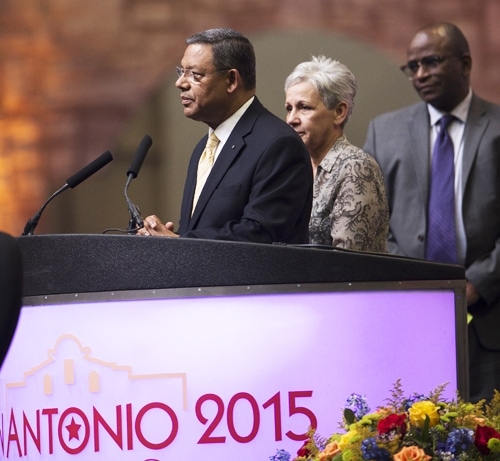 Ng, whose service for the denomination includes being a pastor, seminary professor, and General Conference administrator, was elected as GC secretary five years ago at the GC session in Atlanta.

Ng thanked the delegates for their confidence following his election and, in a flash of his trademark humor, quipped, “I was hoping someone would refer this nomination back to committee.”

His comment was a nod to the brief discussion that surrounded the nomination and election of the GC president earlier in the day.

Ng said the greatest challenge facing the church is changing the culture from members being spectators, where pastors do most of the work, to a culture where the priesthood of all believers is embraced and practiced.

“Every member is an evangelist,” he said.

Geoffrey Mbwana, a general vice president of the General Conference, praised Ng for bringing “a focus on mission beyond his Secretariat duties.”

“Far beyond maintaining and analyzing statistics, he has taken concrete steps to address the issues of mission,” he said.

Mbwana was echoed by Lowell Cooper, another general vice president of the General Conference.

“Dr. Ng’s leadership has heightened global church awareness of mission opportunities and challenges,” Cooper said. “His long experience as a professor shows in his analytical approach to tough issues and his readiness to address both positive and negative trends or developments. His infectious sense of humor makes him a welcome friend and colleague in all circumstances.”

“We are leaders. Those numbers have to be believable. We have to have credibility before our members,” Ng said.

Ng and his wife, Ivy, have two adult children.

Meanwhile, Myron Iseminger was re-elected to the position of undersecretary for the General Conference, a role he has filled since 2011.

“On behalf of my wife and myself, we’ll do our best, God helping us,” Prestol-Puesán said.

Born in the Dominican Republic, Prestol-Puesán has served as treasurer of various church administrative levels, including the Atlantic Union Conference in North America, the Euro-Asia Division, and the North American Division.

In an interview, he said the biggest challenges of the church involve unity and the involvement of lay members.

“I am pledging myself to communication, not only what we say to them, but how we listen to them, how we bring about a better working relationship,” he said. “We will do whatever we can to communicate with our people.”

The volatility of the world’s financial markets has made managing the church’s funds more challenging. Changes in interest rates in some parts of the world can mean a profit or loss of millions of dollars.

“Changes in financial markets, changes in world economies, perhaps a few surprises—we sill have to trust in the Lord,” Prestol-Puesán said. “But we also have to be careful and mindful managers of the Lord’s funds.”

Another challenge is changing demographics.

He pledged to practice a communication style that focuses on listening.

Prestol-Puesán and his wife, Belkis, have two adult children.