Next Generation in Witnessing: the Paper USB Drive 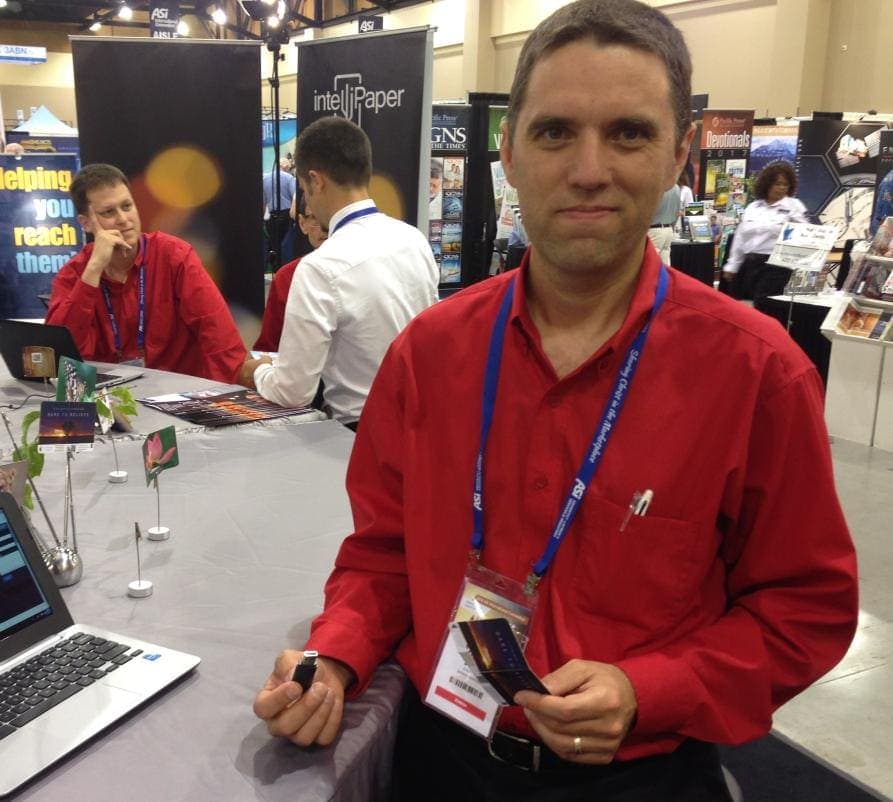 The other day, inventor Andrew DePaula sat down on an airplane beside a man in his late teens or early 20s.

The young man seemed more interested in staring out the plane window than talking — until DePaula pulled out a business card-sized piece of paper.

DePaula showed his seatmate that the ordinary-looking piece of paper could be folded into the world’s first and only paper USB drive.

“Dude, dope!” the young man exclaimed, snatching the card out of DePaula’s hand.

Told he could keep the card, the young man took out his wallet, which was attached to a chain, and carefully tucked it in.

“I’m going to show this to all my friends,” he said.

DePaula had just presented the young man with a copy of The Great Controversy by Seventh-day Adventist Church cofounder Ellen G. White without once mentioning religion.

“I would never have been able to give him a book,” DePaula said in relating the incident to the Adventist Review. “He never would have taken it. But I’m quite sure that he took that card home and showed it to his friends. Who knows what the Holy Spirit will do with that.”

The Seventh-day Adventist Church is teaming up with DePaula and his Spokane, Washington-based intelliPaper company to produce a new generation of sharing tools based on paper USB cards. The cards with colorful images on both sides are already available for as low as U.S.$1 each in five titles: The Great Hope, an abridged version of The Great Controversy; Steps to Jesus, a modern English version of Steps to Christ; “Dare to Believe,” a movie about Creation from Moses’ perspective; “Heroes,” which includes a link to the game app of the same name; and “Tell the World,” a movie about Adventist history that will premiere in October. The Great Hope is also available in Spanish, and other translations are in the works.

The partnership between the General Conference and intelliPaper was showcased in the exhibition hall of the annual ASI convention that ended last weekend in Phoenix, Arizona.

Nancy Lamoreaux, the General Conference’s chief information officer, praised the paper USB cards as the next step in sharing the Adventist faith.

“Today The Great Hope and other titles are available as inexpensive intelliPaper cards and are an incredibly effective way of placing our message in the hands of people who might not otherwise be interested,” she wrote in the summer/fall issue of the Inside ASI magazine distributed at the convention.

DePaula, speaking in an interview in the ASI exhibition hall, refused to discuss his invention without first emphasizing that he gave God all the credit.

“God gives good ideas,” he said, holding a plastic USB stick in one hand and a paper USB card in the other. “I actually prefer to say it was His idea. Anything we do comes from God.”

The origin of the paper USB card goes back to the early 2000s when DePaula worked as associate director of the Bibleinfo.com ministry at the Adventist Church’s Upper Columbia Conference in Spokane. Seeking an inexpensive way to share his faith, he packaged the whole Bibleinfo.com website, the Bible in four languages, and other information on a square miniCD that sold for $1 each. More than 100,000 miniCDs were distributed before a patent dispute unrelated to DePaula’s work abruptly halted production of the discs.

Seeking another way to share, DePaula began to wonder whether he could create a USB drive for less than $1. In 2008, he went to the Consumer Electronics Show in Las Vegas in search of a solution but learned that he could not bring the price below $3, which was too high for a giveaway.

Feeling discouraged, DePaula began fiddling with his electronics show badge back in his Las Vegas hotel room and noticed a lump inside. He took the badge apart and found a RFID radio tracking device inside that allowed the electronics show to track his movements.

“It just hit me in that moment,” DePaula said. “It’s like God did a brain dump — that if they could do that with a chip and an antenna, why couldn’t I make a paper USB drive?”

It took DePaula three years to develop a working prototype, which debuted in 2011 at the ASI convention in Sacramento, California. Three more years passed before he was able to develop a manufacturing process.

“There’s nothing like this out there,” he said. “We effectively invented paper circuit-board technology.”

The paper USB card, which has both ministry and commercial applications, contains a small silicon chip capable of storing books, Bible studies, web links, and websites. The cards being produced with the Adventist Church contain less than 1 megabyte of memory and are read-only, but other versions made by intelliPaper are writable and contain more memory. DePaula’s company, which holds 15 patents, also makes the cards with wireless technology, allowing them to communicate directly with smart phones and other devices.

The Adventist sharing cards are available in packs of 10 at the website Adventist.cards. An 11th card in the pack allows the buyer to register the cards and upload a photo and personal message for recipients.

When the recipient inserts the card into a USB port, the photo and message will pop up together with an invitation to connect with the card-giver online.

“Behind the scenes, the card records that it has been plugged in and where it has been plugged in,” said John R. Beckett, director of the Office of Global Software and Internet at the General Conference, who is working closely with DePaula on the project. “So as you’re sharing the cards, you have some feedback that this sharing is worthwhile because people are plugging it in and looking at it.”

Although DePaula is working on a small scale with companies such as FedEx, the American Chemical Society, and Malwarebytes, he said his priority is to find ministry applications for his invention.

“Ministry is in my blood,” said DePaula, who grew up as a missionary kid in West Africa. “This could not only facilitate ministry but might in time be a good business to fund ministry as well.”

He said he was eager for the Adventist Church to use the technology in a big way first.

“There is nothing like this for witnessing to people,” he said. “I can give these cards to people who would never take a book or a brochure, mainly because of the curiosity factor.”

DePaula said he enjoys passing out the cards. He always keeps a few in a pocket and a regular USB stick in another. Whenever he sees an opportunity, he asks a stranger, “Have you ever seen a paper USB card?” Hearing the inevitable, “No,” he pulls out a card, the USB stick, and says, “Watch.” He then folds the card, holds it up beside the regular USB stick, and declares, “These are identical.”

The result is usually a mixture of surprise, curiosity, and excitement, he said.

During a recent visit to a mall, he and a friend distributed 13 paper USB cards with The Great Controversy in less than an hour.

“I’ve never seen these kinds of reactions from people,” DePaula said. “We gave 13 cards away because in several interactions the person was so excited that they called over other people and we ended up giving them cards, too.”

Journeys with Jesus
The Gift Without Strings