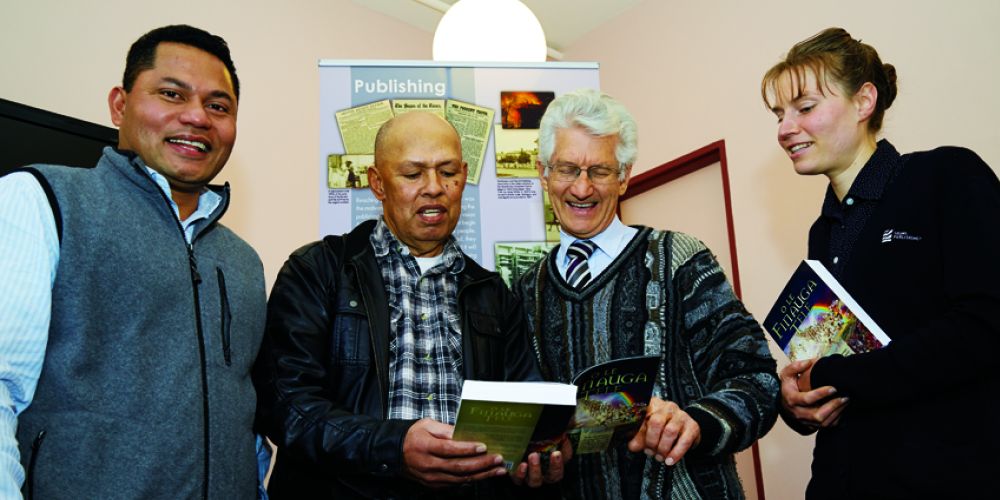 Evangelistic-minded Samoan congregations have raised the funds to publish a new translation of The Great Controversy by Ellen White, returning to print a volume last published in 1991.

The Great Controversy, or O Le Finauga Tele, had been out of print for many years, but the 2015 edition has been released in a partnership between the Samoan Mission, Samoan churches in Australia, New Zealand and the United States, and Signs Publishing.

It features a new translation overseen by Kuresa Tagai, a retired Samoan schoolteacher and pastor, based in Brisbane, Australia.

Pastor Eddie Erika was working in Samoa in the aftermath of an earthquake and tsunami in 2009 when he was asked by Samoan church leaders to coordinate the project with Signs Publishing in his hometown, Melbourne. As well as working with the translating and language editors, Erika coordinated fundraising for the initial print run of 20,000 copies.

“The Samoan people are always evangelistic in their thinking and their work, so many churches have donated from their evangelism budgets,” he said. “But many individuals have also contributed, as well as financial support from other donors, the Samoan Mission and the South Pacific Division.”

Erika Puni, director of Stewardship Ministries for the General Conference, has worked to support and coordinate this project among Samoan congregations internationally.

“By nature, Samoans have a strong affiliation with their families, irrespective of where they live in the world, and this project has pulled us together as an Adventist family for God’s mission,” he said.

More than just another book, Puni said that the new O Le Finauga Tele “provides for our church members globally an invaluable evangelistic tool that they can share with their families, friends and neighbours, given the unfolding of world events in the political and religious contexts of our world.”

Erika said the new edition is particularly significant for the church’s work among Samoan people.

“Most Samoan people are Christians and we want to share with our people where we come from in our Adventist faith,” he said. “One of the things that identifies us is our understanding of last-day events, the history of the Christian church and where we are headed.”

He said he has re-read the book three times while working on this project.

“When I was asked to do this, I went back and read the whole book because I wanted to make sure that I shared it with genuine enthusiasm,” he said. “It has been a great encouragement to me and I am so thankful that God has given us this message to be shared prayerfully with our people.”

Kevin Geelan, sales manager for Signs Publishing, said Signs and a number of their donors were excited when approached by Erika about the project.

“This demonstrates what the mission of Signs Publishing is all about, providing spiritual resources that will build the church, as well as placing evangelist tools in the hands of our church members,” Geelan said. “We also believe that when this book gets into the hands of the Samoan people, it will inspire them to show what can be done with concerted effort and will add impetus to their dreams for other printing projects that are in the hearts of our Samoan leaders.”

Erika said the publication of The Great Controversy put in place a process for other quality translations.

“We are going to continue pushing our people to work on Steps to Christ and The Desire of Ages,” he said. “We have shown that this can be done and our people have the opportunity to do more.”

The new O Le Finauga Tele will be used by Adventist churches in Samoa, as well as Samoan communities in Australia, New Zealand and the United States, including Samoan churches in Hawaii and Alaska.