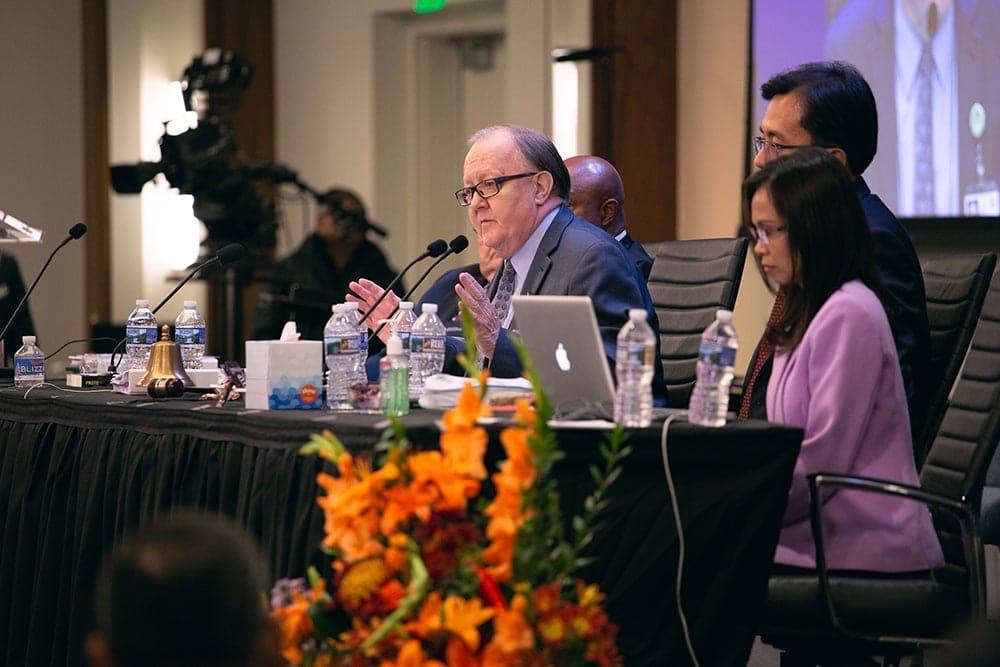 The first person to the microphone was Terry Shaw, president/CEO of Adventist Health System, who made a motion that the NAD work with the General Conference to move to some type of a different arrangement for financial parity. “I do not want to hurt the world church, but at the same time there are so many ministries right here locally that we can’t get to,” Shaw said.

After a few speakers, Lee-Roy Chacon, president of the Texico Conference, asked for information on what the NAD gives to the GC. It was reported that the NAD currently gives 6.35 percent of its tithe to the GC, with a gradual reduction to 5.85 percent by 2020; the other divisions of the church give 2 percent.

The motion on the floor was then amended to “Recommend the NAD Administration to discuss with [the] General Conference the issue of financial parity to be accomplished in two to three years.”

Delegates expressed their thoughts both for and against the motion. Some, including Juan Prestol-Puesán, GC treasurer, implored the NAD to exercise caution and a “slower approach,” saying that a reduction in that short a time would be damaging to mission around the world. “Even 5 years is too short,” said Prestol-Puesán, who also mentioned that he served for many years as the NAD treasurer before moving to the GC.

Most assembled spoke in favor of the amended motion.

"We've paid much for the world, and I hope we'll continue to pay much for the world,” said Randy Roberts, senior pastor of the Loma Linda University Church. “I have no hesitation there, except to say there comes a point when the giving exceeds what an entity is able to do and it becomes damaging and then it implodes."

“Salvation is free, but ministry takes money” said Carlton Byrd, speaker/director of Breath of Life TV Ministries, and senior pastor of Oakwood University Church. “We can be dismissive if we want, we can be condescending if we want, [but] in five years we may not have a church.”

After a lengthy period of discussion from the floor, the motion passed with a vote of 121 for and 90 against.

Before Jackson officially closed the meeting, he addressed those gathered, speaking passionately and candidly for almost 20 minutes.

Jackson continued: “I will say, from the perspective of serving as president for eight years, that I am very tired and probably angry at the way our division is looked at by the world. We are not rebels, we are Seventh-day Adventists. There is tremendous loyalty to the church in the North American Division. Once again, I would challenge someone to find any of the divisions that are more loyal to the church, both in terms of policy and finances, than the North American Division.”

“This division has not only been the bread basket, but it has been the source of human resources that have fanned and fueled mission and growth and development in the world church for decades; I hope and pray it will continue to be. I hope and pray that we can come to an amicable resolution of the financial issue that is pregnant in this division.

“We will not pull back. We are not going to quit hiring women pastors. … We will not stop.

In conclusion, Jackson said, “We need to find new ways and new methods of evangelizing for Jesus Christ — some of us will do that believing in women’s ordination, some will do that not believing. I'm appealing to all of us. … We must work together. We have and will always have some impediments but let us not be deterred. Let us move forward in our mission, and with joy in our hearts — not anger — but joy in our hearts because the Lord Jesus, who came as a baby in a manger, is going to come again and He wants us to live with Him and with each other forever.”

— Click here to watch the entire Nov. 5 afternoon business session, and all the other 2018 NAD YEM sessions.