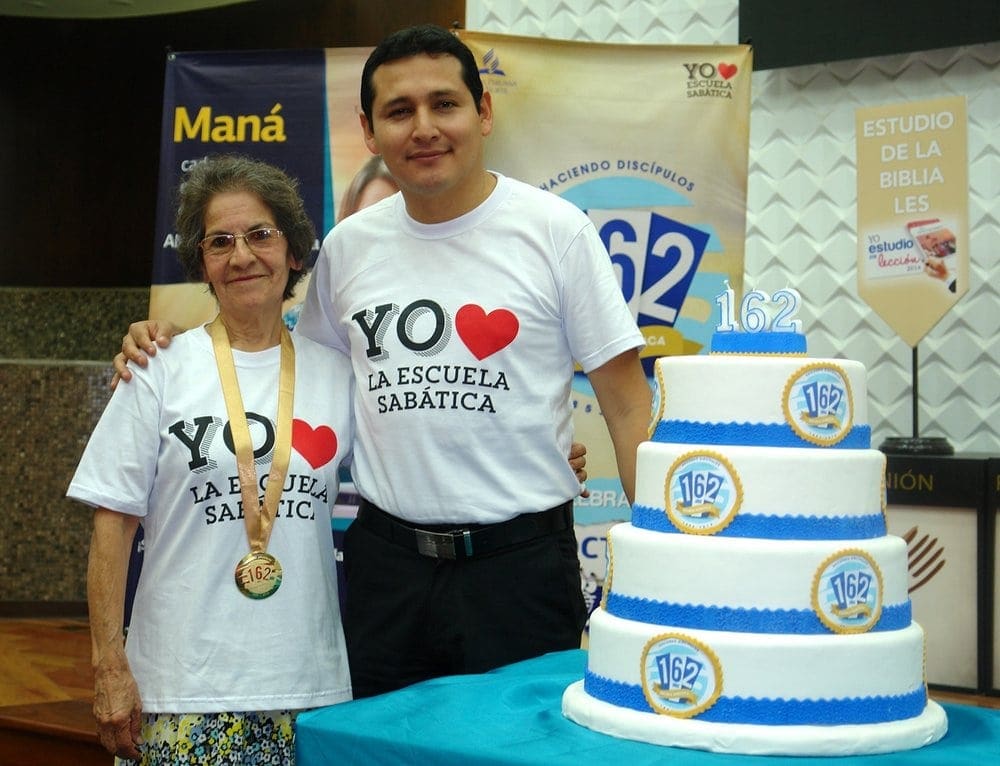 Loida Pinedo Dávila has devoted 50 of her 70 years of life to teaching Sabbath School.

Pinedo, born into a Seventh-day Adventist home in Tarapoto, Peru, decided to be a Sabbath School teacher at the age of 10 when she took her younger sister to a Sabbath School class taught by the wife of a U.S. missionary couple named Tilman in Pucallpa, Peru.

Pinedo doesn’t remember the wife’s first name, but she has never forgotten catching a glimpse of Jesus during the Sabbath School class in 1960.

“My desire is to sow the love of Jesus in the hearts of children always,” she said. “That motivates me and gives me joy. I like it. I can’t sit during Sabbath School. I always want to be active.”

South American church leaders recognized Pinedo for teaching Sabbath School to thousands of children over five decades during a celebration of the 162nd anniversary of Sabbath School — the first school in the Seventh-day Adventist Church and the oldest department of the church. Under the banner “For a More Relevant Sabbath School,” the church’s South American Division joined a worldwide celebration of the ministry with a ceremony and a large white cake in Brasilia, Brasil, on Oct. 17.

Sabbath School began in 1852 when church cofounder James White wrote the first Sabbath School lessons. He organized the first regular program in Rochester, New York, in 1853, a decade before the church officially organized into a denomination. Sabbath School is a place for young and old to study the Bible together as a community, providing an opportunity to share faith, apply faith, and disciple one another.

Read “Adventist Education Can Learn a Lesson From Sabbath School”

After 50 years, many generations of Pinedo’s former Sabbath School students now work for the church.

Oswaldo Valdivia, a television producer for the Adventist network Nuevo Tiempo in Peru, said Pinedo developed the habit of studying the Bible in him and other students.

“I grew to enjoy reading the Bible,” he said. “And I remember also that at some point she encouraged me to sing in the children’s choir.”

Valdivia wasn’t enthusiastic about singing initially, said Pinedo, a third-generation Adventist who was baptized in August 1969.

“I remember when little Oswald said that he did not sing well and that his voice was a little out of tune,” she said. “One day my husband told him to take singing lessons, and today he is a singer, has a beautiful voice, and praises the Lord.”

He and other former students said Pinedo was the first person to plant a love for God in their hearts.

Omar Bullón, stewardship ministries director for the Adventist Church in north Peru, started attending Pinedo’s class at the age of 7 and was quickly captivated by the Bible stories that she told in “a perfect soft and tender tone.”

“We could see affection but also firmness in her character,” he said. “Twenty-eight years have passed since I was 7, and she continues to influence many children and parents with her life and teaching.”

A mother of three, Pinedo is pleased that her eldest daughter, Roxana Santos, is a Sabbath School teacher. Her son works for an Adventist radio station in the United States, and her other daughter works in the offices of the Adventist Church in north Peru.

Despite her age, she directs two children’s choirs in her local church, serves as a counselor for the Adventurers’ Club, and teaches Sabbath School for beginners’ class at the Villa Unión Adventist Church in Lima, Peru.

She then shared why she has taught children for 50 years.

“One of the secrets to staying a Sabbath School teacher is to love the mission that God has entrusted us: to love and take children to the feet of Christ,” she said. “We have to see this job not as working for men but working for God. We must do our very best.”