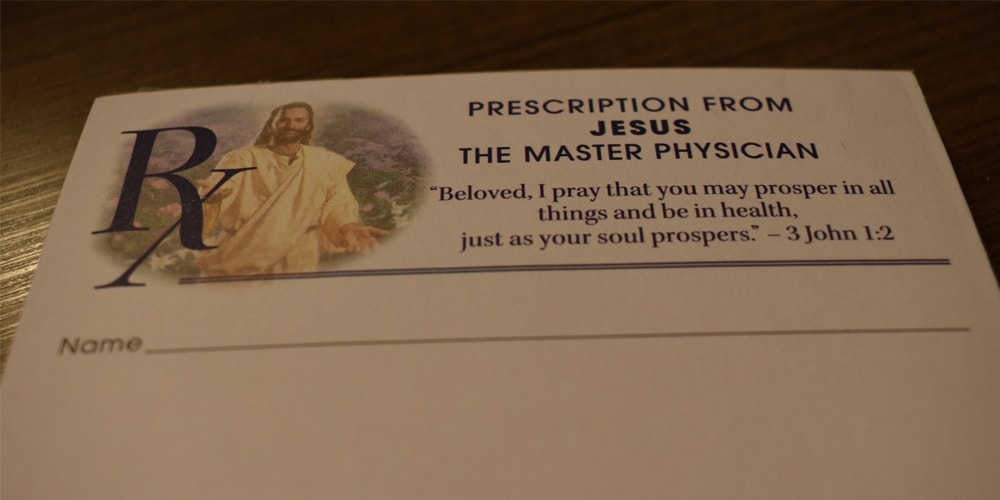 Physicians and dentists’ waiting rooms rarely elicit feelings of comfort, fondness, or solace. For many patients, they cause feelings of restlessness and apprehension.

In the waiting rooms of Seventh-day Adventist health practitioners, however, that may be about to change. A new initiative spearheaded by long-time evangelist and healthful living advocate Mark Finley is encouraging Adventist medical professionals to use their offices to make their mission and values explicit. Finley shared the novel elements of the initiative on the opening night of the Adventist Medical Evangelism Network (AMEN) conference in Indian Wells, California, United States, on October 28, 2021.

“One of the roles of AMEN is to provide resources for [Adventist] physicians, dentists, and medical personnel,” Finley explained. As part of this, AMEN recently developed a prescription pad unlike any other.

At first sight, the pad looks just like any other. But this one is titled, “Prescription from Jesus, the Master Physician,” and quotes 3 John 1:2, where the apostle John wrote, “Beloved, I pray that you may prosper in all things and be in health, just as your soul prospers.” At the bottom, the prescription pad quotes Isaiah 40:29, which reads, “[God] gives power to the weak, and to those who have no might, He increases strength.”

Finley suggested some uses for the prescription pad. “You can write a personal message, including a short spiritual note and a Bible verse,” he said. “You can also write practical lifestyle ‘prescriptions.’ For example, ‘John, your blood pressure is high. Exercise five times a week, walking 30 minutes each time,’ ” Finley shared, adding, “We feel that this prescription pad will be really helpful to [Adventist] medical personnel.”

Another element of this new push to assist health-care professionals in sharing their faith and values is changing the way they see their waiting rooms, helping them be more intentional in their approach to sharing what they believe even before they talk to a patient.

“The key question we ask [Adventist] physicians is, ‘Does your waiting room reflect your mission and values?’ ” Finley shared.

He explained that one of the things AMEN leaders have done this year is to set up a model waiting room, with at least three items that Finley called “key elements to creating a spiritual environment.”

First, he mentioned high-quality health and spiritual literature. “You can offer various magazines and booklets discussing health-related issues. Also, spiritual magazines or pamphlets,” he said. The idea is that the literature in the waiting rooms of Adventist health practitioners reflects biblical values.

Finley interviewed David Otis, an experienced Adventist dentist who has made a point of sharing inspiring literature in his waiting room. Otis shared that when he purchased and opened his dental office, the first thing he and his wife did was to dedicate his office to the Lord. “We knelt down in the middle of the waiting room … and we prayed,” he said. They also set up a literature rack. “Each time we fill that literature rack, we do the same thing — we kneel, and we dedicate that literature, [praying] that it will fall into the right hands, and that people will be blessed.”

Otis acknowledged that most of the time, they do not expect to know or see the fruits of their ministry of literature. “But,” he said, “the silent messengers of truth-filled resources in that room [can help us] reach people for Jesus.”

A second element Finley suggested is placards. “Place encouraging placards [in your waiting room] that speak a great deal about why we exist,” he said.

One of the special placards designed for Adventist physicians reads, “Our Commitment: You are more than a mere statistic. You are a human being created with limitless potential and highly valued by God. Your well-being is our top priority.”

“There are a number of these placards,” Finley explained, “so when a patient goes through the waiting room, they see what our values are. They are short, they are positive, and they are very, very encouraging.”

Another message reads, “Keep smiling: It’s good for your health,” and quotes Proverbs 17:22, where King Solomon wrote, “A merry heart is a good medicine.” A third one reads, “Healthy choices make a difference. Health is a gift. Cherish it. Choose to live healthy every day.”

A third element included in the model waiting room is pictures, Finley said. “Hang uplifting artwork showing patients this is a godly provider’s office — pictures of physicians and medical scenes that are encouraging to the patient. For instance, a well-known picture of a dental office with Jesus assisting the practitioner,” he suggested. “This can help the patient know that this is a godly physician who believes that the Lord is guiding, relating, and in control of their health outcomes.”

Overall, Finley said, Adventist health practitioners should make a point of reflecting their values and mission in their offices, something that he called “archa-theming.” “You build into the architecture of your office or your facility your mission, so every place you look, there is a picture that reflects Christian values and Christian principles,” he said. Thus, a dull waiting room can become a place “that inspires, instructs, and uplifts the spirit.”