It Is Written’s Spanish-language Escrito Está is reaching out in some of the hardest places.

It Is Written, and Adventist Review 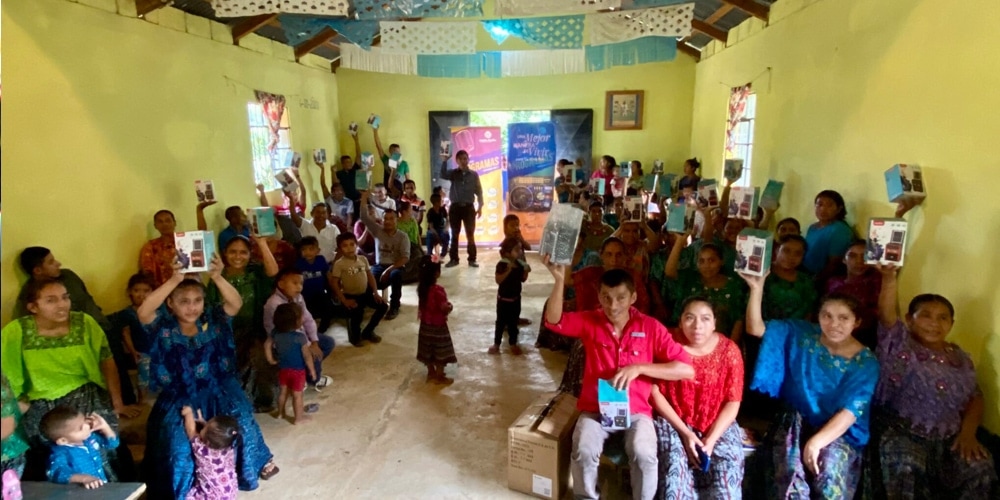 The members of a church in the small village of Chicanutz in central Guatemala hold up their new radios in their church building. The radios were a donation of Escrito Está, the Spanish-language ministry of It Is Written. [Photo: It Is Written]

In October 2021, a small team from Escrito Está (EE), the Spanish-language program from media ministry It Is Written, traveled to Guatemala to distribute water filters to a community desperately in need of them.

It Is Written also joined a local radio station to share solar-powered radios with the Kekchi people, giving them access to EE programs translated into their native language.

The project began with a recently baptized young couple who wanted to share the gospel in a small community in southern Guatemala. A friend from a small village near Moyuta told Anthony, “If you want to do service, please remember my town; it needs as much help as it can get.” After visiting a village near Moyuta, Anthony and Angie realized their friend was right.

Despite government efforts, the people in that area live in extreme poverty. Many work in agriculture and only earn US$2-4 a day. Anthony and Angie started visiting once a month and invited other young people to come and serve.

The work grew so much that they created a non-profit organization called Familias con Futuro (“Families with a Future”). Now, every month a group of young people travels 2.5 hours from Guatemala City to Moyuta to spend time with the families there. They celebrate birthdays, play with the children, bring school supplies, organize health fairs, and help repair homes.

For their most recent project, volunteers decided to provide water filters to local families. They realized people did not have access to clean drinking water and were getting sick as a result. High heat and humidity only compounded the issue. Drinking water is essential for people who work under extreme heat and have no air conditioning in their homes, and for children to avoid illnesses such as cholera. In February 2021, the EE ministry joined forces with the church to support this initiative.

Thanks to recent donations, all 300 families in Moyuta received water filters during the fall. The team helped distribute the water filters and shared a special message: “God loves the people of Moyuta. You have not been forgotten. Every time you drink this water, remember the One who has promised to give you the water of life. If you drink from it, you will not thirst again. Trust in the love of Jesus.”

As he received his water filter, one resident of the community said, “Thank you for what you have done for our community, for coming all the way here to show us the love of Jesus.” Another woman stated, “I thought Jesus had forgotten me. This means so much to my family, thank you!”

Alejandro, one of the community volunteers, said: “Thank you for supporting this project. Seeing an organization like Escrito Está coming to Guatemala to help a small group of volunteers serving in a poor community defines what a church should be. I’m very encouraged and will continue helping my community with more fervor than ever.”

The team’s next stop was Chicanutz, a small village in the middle of the mountains populated by the Kekchi, a native community. It was an eight-hour trip north from Guatemala City. Roads are rough, and not all vehicles can enter the area. They traveled with members of Unión Radio Guatemala, a radio station that covers most parts of the country and broadcasts EE programs. The station recently began broadcasting in the central part of the country, where there is a large Kekchi population.

The region has no electricity, and the only building with a generator is the small church. Members turn it on only during worship hours on Saturday (Sabbath). Only a few people in the community know how to speak Spanish fluently. Having Christian content that they can understand in their own language is essential for their spiritual growth.

Oscar Cucul is a Bible worker who has been a pastor to the Kekchi community. He is a Kekchi himself and feels that God has called him to find and train new disciples to continue his work. He said, “I wish I had met Jesus when I was younger. Before coming to Christ, I was a homeless man. I only learned of the gospel when I was 39 years old. My dream is to have a school of discipleship to train young Kekchis to share the gospel. I'm getting older, and the day will come when I won't have the strength to continue. This is the greatest burden in my heart.”

During the worship service, Cucul acted as an interpreter. “He played a key role in our connection with the community,” EE team leaders said. “We were received with smiles and a lot of love. B’antiox was one of the easiest words to learn, which means ‘thank you.’ Children were shy but curious when they saw our cameras. The congregation proceeded to sing from the Spanish hymnal, many not understanding what they were singing. Can you imagine singing to God without understanding what you are saying to Him?”

The EE team said that the weather was very humid and hot. “We only stayed for a few hours due to the threat of rain, which would cause us to be stuck due to the poor roads. We delivered the radios and hurried to the next group that lived farther up the mountain,” they explained. “The second group is a growing church, but they meet in someone’s house because they don’t have a church building. There was no air conditioning, and the room was dark. The local people were very excited to receive us and prepared a delicious soup for us to have for lunch.”

During each short visit, the EE team spoke about the importance of sharing Jesus and learning of His Word, then distributed the solar-powered radios. “Many rushed to unbox them because they wanted to learn how to use them,” team leaders shared. “People were excited to discover that they could listen to sermons in Kekchi and look forward to receiving more content in their native language.”

Farther into the mountains is a third group. “It was starting to rain, so we were not able to visit them,” team leaders explained. “We left Oscar in charge of distributing the remaining solar-powered radios and training people in how to listen to the Christian programs.”

EE leaders said that although this trip was an outstanding achievement, it is only the beginning of an important mission: creating more content that can reach areas that have yet to hear the gospel in their tongue. “Let us continue to pray for people like Oscar who are in a vast mission field. Let us continue to support the creation of more content in different languages,” they said.

The original version of this story was posted on the It Is Written blog.