‘Meeting People Where They Are’ 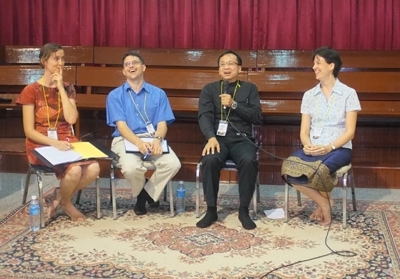 More than 70 ministry leaders, administrators, educators,
researchers, front-line pastors, and engaged lay members met from May 20-22,
2014, in Bangkok, Thailand, for a conference focusing on “Ministering to
Mourners: Funeral Rituals and Christian Witness in East Asian Contexts.”

The
conference was organized by the Center for East Asian Religions (CEAR), one of
six Global Mission Centers directed by the Office of Adventist Mission of the General
Conference of Seventh-day Adventists. “Mission is messy, because mission tries
to solve problems,” said Greg Whitsett, director of CEAR, during the opening remarks
of the conference that focused upon identifying key missiological issues related
to Adventist funeral rituals in the context of majority non-Christian
religions. Conference participants, however, were not only asked to identify
the issues, but also think and pray together about creative solutions and
contextualized approaches to minister in communities with no or little
Christian witness.

During the three-day conference, participants heard 14
plenary research presentations that highlighted the major issues of ministry
and witness during funeral rituals. Anthropologist and Adventist Frontier Missions
(AFM) missionary Daniëlle Koning highlighted the relative lack of Adventist and
Christian ceremonies related to death in a Buddhist context that is highly
sensory and ritualistic. “Could it be that the church in Asia needs to develop
a stronger ritual repertoire and appeal more to the senses in order to
effectively minister to mourners?” she asked during her opening presentation.
This issue was taken up by Christopher Sorensen, an AFM missionary working
currently in Thailand who suggested 13 guiding principles for Thai Seventh-day
Adventist funerals as well as eight suggestions for contextualized practices.

Other
presentations during the first day of the meetings included a discussion of
grief and loss and meaningful support to the bereaved in a Buddhist context by
Amy Whitsett and a practical discussion of how to honor the dead and minister
to the living in Laos by Khamsay Phetchareun, professor at the Asia-Pacific
International University and special supervisor of the Adventist work in Laos.

In preparing for the conference, the organizers opted for
a very participant-driven format. Each 30-minute presentation was followed by
small group discussions focusing upon the key issues, suggestions, and
challenges highlighted in the presentation. Each day concluded with a
round-table discussion engaging the day’s presenters and audience in shared
reflections.

Participants also enjoyed six devotionals during the
event, led by ministry leaders and administrators, including Joshua Mok,
president of the Southeast Asia Union Mission, Singapore; James Park, associate
professor of missions at the Adventist International Institute of Advanced
Studies in the Philippines; Doug Venn, director of Adventist Mission at the
Southern-Asia Pacific Division; Gerald Klingbeil, associate editor of Adventist World/Adventist Review
magazines and a research professor of Old Testament and Ancient Near Eastern
Studies at the Theological Seminary, Andrews University; Rick McEdward,
director of the Global Mission Centers; and Gary Krause, director of the Office
of Adventist Mission at the General Conference.

Presentations focusing upon specific issues related to
Buddhism alternated with presentations looking at larger issues. Gerald
Klingbeil highlighted the importance of ritual in Scripture and its potential
for mission in general. Rituals “represent the pinnacle of potential and
artistry—yet are also laden with possible pitfalls,” noted Klingbeil. “Both
mission practitioners and those thinking about missions need to be mindful of
them and utilize them to proclaim the gospel message with a loud cry and in a
way that is understandable to millions of people who otherwise may not be able
to ‘hear’.”

Other
presentations looked at the issue of comforting the mourning in incarnational
ministry (Michael Kier), death and burial in the Old Testament (Wann Fanwar),
missiological reflections on the Chinese Qingming festival (Samuel Wang), and
challenges and strategies for contextualizing Malagasy funerals within the
context of Madagascan culture (Jacques Ratsimbason).

During
the final day of the conference, two former directors of CEAR, Scott Griswold
and founding director Clifton Maberly, shared personal and insightful
presentations on sharing Jesus with Buddhists and the larger issue of
contextualization in practice. Participants also dedicated significant time to
discuss and vote a statement on “Ministering to Mourners,” focusing on excellent
grief care and more appropriate bereavement rituals.

The
participants paused several times during the conference to consider the real
challenges of ministering to the millions of Buddhists in Southeast Asia and
took the time to pray together for divinely inspired creativity and vision.
“It’s sobering to hold this meeting in a city of nearly nine million people,
many of whom have never even heard the name of Jesus,” noted Gary Krause,
highlighting the vital role of the conference “to explore ways to make the good
news about Jesus understandable and meaningful to people who come from a
totally different worldview to Christianity.”

Rachel Somphou,
a teacher in Laos, enjoyed especially the experience of a learning community
and felt stimulated and challenged. Her husband Keophetsamon Somphou, pastor of
the Phonexay Church in Vientiane, the capital of Laos, added that he
appreciated the many practical suggestions he had heard and was eager to
experiment with them in his particular context.

Global
Mission Centers director Rick McEdward offered an apt summary of the purpose of
the conference: “The meeting was significant because it discussed and looked
for solutions to real mission challenges.”