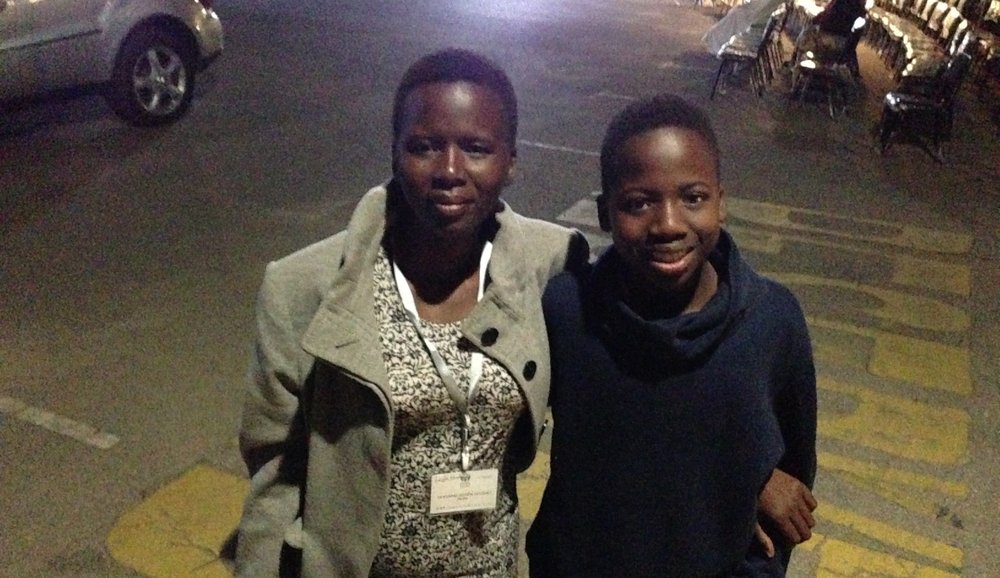 A Seventh-day Adventist-organized free clinic that has astonished Zimbabwe by treating more than 30,000 patients in two weeks is a dream come true for Linda Sibanda.

The clinic, which wraps up on Friday in Chitungwiza, a city about 30 minutes by car south of the country’s capital, Harare, is the result of several months of preparation by the Adventist Church’s Zimbabwe Union Conference and the tireless efforts of more than 550 volunteers.

But Sibanda, 40, a nutritionist with a master’s degree in public health and a mother of five home-schooled children, is being singled out by church leaders as one of the true heroes of the event.

Sibanda, the clinic’s programs coordinator, started praying and planning for the event four years ago.

“God impressed on me to change the way that we were doing health expos,” she said in an interview.

Sibanda felt that the community did not benefit enough from the typical one-day events that offer limited services such as diabetes or high blood-pressure tests. So in 2011, she organized the Zimbabwe church’s first one-week free clinic, or health expo, which saw 40 volunteers treat about 1,500 patients in the country’s second-largest city, Bulawayo.

She was encouraged by the initial response.

“What was so great was that we saw the expo was breaking ground for cultures and different religions,” Sibanda said. “I remember a particular man of Indian origin who decided to stop smoking during the weeklong expo. He said to me, ‘Oh Linda, when are the tents going to be set up again? This is a great work that you are doing.’”

But Sibanda still wondered if the event was lacking. She was bothered after reading in the writings of Ellen White that camp meetings should be lengthened from one week to allow enough “time for the truth to affect the heart and change the channel of the thought.”

“Our camp meetings should continue two weeks,” White wrote in Review and Herald in April 22, 1884. “Not one-third the good is accomplished when the meeting is held a single week that would be if it were held a week longer.”

Sibanda imagined what a difference a free clinic would make if it grew to two weeks. Its lifestyle component could be expanded to offer 10-day classes that, among other things, taught people how to manage their physical conditions through diet. She began to dream about a two-week free clinic.

A Plan Followed by Disappointment

One night in 2013, she awoke with a plan in her mind for how the two-week clinic could operate. She immediately jotted down the details.

“I just woke up and wrote down this entire plan for an expo, the backbone for what our expos needed to be like, with a focus on lifestyle and what we needed to do to address the immediate needs of the community,” Sibanda said.

She took the ambitious plan to the leadership of the Zimbabwe Union Conference and received permission to seek donations from the business community to finance it. Every company turned her down except one. She ended up with $10,000, far from the amount needed to organize the event.

Sibanda became deeply despondent, to the extent that those around her were concerned by her discomfort. Two large tears rolled down her cheeks as she recalled this time of disappointment in her life.

She spoke in an interview on Wednesday night in a parking lot located between the site of the ongoing two-week free clinic and a field where some 20,000 people, many from the clinic, had just attended an evangelistic meeting.

Sibanda said she finally found restoration in Ellen White’s Mind, Character, and Personality, which she read cover to cover.

The $10,000 donation went to organize a scaled-down event with health booths and musical performances in a Bulawayo church. The event, held in 2014, caught the attention of the national committee for the Africa Youth Games, whose members went through the expo and remarked that they could have saved a significant sum of money if their athletes had used the expo’s free medical screening, the same screening required for the games.

In March 2015, Sibanda was approached by Innocent Gwizo, director of health ministries for the Zimbabwe Union Conference. He wanted to organize a two-week free clinic to coincide with countrywide evangelistic meetings at the end of May. The free clinic would operate in a shopping center in Chitungwiza during the day, and Adventist Church president Ted N.C. Wilson would preach in the adjacent field in the evenings.

“Pastor Gwizo approached me and said, ‘Pastor Wilson is coming to Zimbabwe. Would you like to implement the health expo that you designed last year?’” Sibanda said. “I said, ‘I’m not sure we can afford it with the economic situation.’”

Gwizo said in an interview that Sibanda had the skills and the vision that he desired on his three-member core team, which also includes Dr. Masima Mwazha.

The three — Sibanda, Gwizo, and Mwazha — are credited with making the free clinic a reality. “They are the ones who are the heroes in this undertaking,” said Dr. Alex Llaguno, director of health ministries for the Southern Africa-Indian Ocean Division, which includes Zimbabwe.

Sibanda said she was excited about Gwizo’s invitation to work with the free clinic.

“I prayed to God, and I felt impressed that I should do it,” she said. Despite her husband’s concern regarding a possible repeat disappointment, she boldly affirmed to him, “‘If it is God’s will, it will happen. If it is not God’s will, it will not happen. So we should give our whole work to this.’”

The combination of a free healthcare and evangelistic meetings is part of an Adventist world church initiative called comprehensive health ministry. The goal is to follow Jesus’ example and meet the physical and spiritual needs of people — a blended ministry that Wilson and Dr. Peter N. Landless, director of health ministries for the Adventist world church, openly speak about at evangelistic meetings.

“As you feed your body as best as you can, feed your spiritual life,” Landless told attendees during a health presentation at the beginning of the evangelistic meeting in the Chitungwiza field on Wednesday night.

“Dr. Landless and I work together in a blended ministry,” Wilson said in his opening remarks after Landless sat down. “You see, Jesus spent more time healing than preaching.”

After Gwizo’s invitation, Sibanda put all her efforts into helping prepare for the free clinic. She put her five children — the oldest is 14 and the youngest are 7-year-old twins — on a fast-track in their home-school lessons so she would be freed up to work on the clinic in April in May.

“But I should say God already set the plan in 2013,” she said. “The whole design and much of the groundwork had already been done. Now the plan was coordinated with the team and made into a wonderful partnership.”

Three of her children are volunteering at the free clinic.

Zimbabwe’s vice president and health minister have been among the prominent officials who have applauded the church’s efforts. National television, radio, and newspapers have reported about the event, and patients have traveled to the site from hundreds of miles away.

Just on Wednesday a group of officials from Zimbabwe’s health ministry, the World Health Organization, and several nongovernment organizations visited the clinic to see first-hand what the fuss was all about.

The group toured the various areas of the free clinic, including the addiction reversal room, where people are receiving assistance to in their struggles with tobacco, alcohol, and cocaine.

The event has far exceeded organizers’ expectations. They had hoped to treat a total of 15,000 patients, but the figure had reached 30,024 patients as of Wednesday night. The overall value of the healthcare provided at the free clinic is expected to exceed $2.5 million.

“This has touched many lives,” Sibanda said. “The Adventist Church will never be viewed the same in this country again.”

Commentary
A Day on the Road with Ted Wilson
Five sermons and a road scare do not tire Adventist Church leader.
News
Occultist Hated 3ABN’s John Lomacang. Then She Visited His Evangelistic Meeting