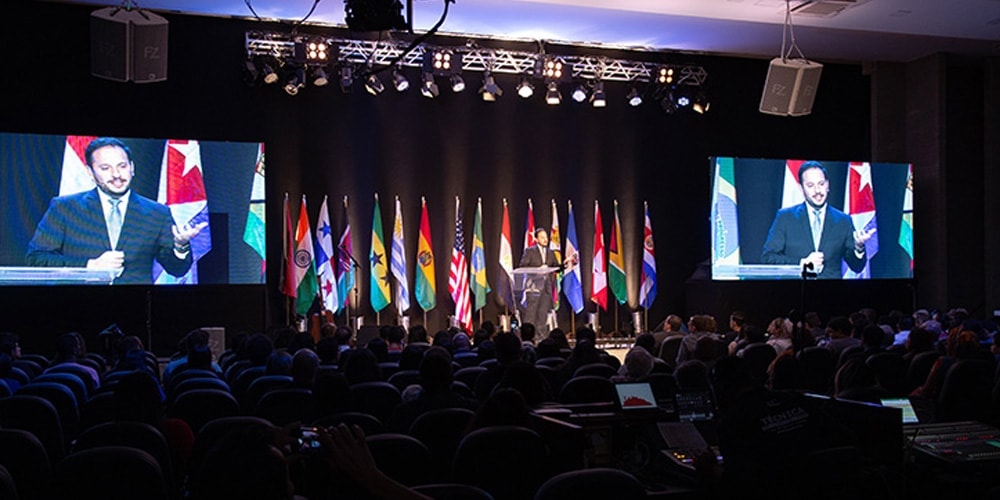 Maranatha Volunteers International, a supporting ministry of the Seventh-day Adventist Church based in Roseville, California, United States, recently held its first convention in South America. About 300 leaders, supporters, and volunteers met in São Paulo, Brazil, June 22-24, 2018, to listen to mission reports and initiatives of the international ministry, which builds Adventist churches and schools and digs water wells around the world.

South American Division president Erton Köhler, the keynote speaker at the event, praised the mission of Maranatha Volunteers International. “As we make our best efforts for God’s work to advance, we see that even as God keeps working miracles, He needs more hands,” Köhler said. “God works through hands—hands that reach out, hands that offer themselves. And I come today to say one thing: Maranatha has been one of the best hands God has used to advance His work in Brazil, South America, and elsewhere in the world.”

The “Missão: Maranatha” (“Mission: Maranatha”) special program sought to celebrate missions and service. The event, held at the Morumbi Seventh-day Adventist church, highlighted Maranatha volunteer testimonies and featured several Adventist Church leaders, including the presidents of the Adventist Church administrations in Bolivia and São Tomé and Príncipe. It also featured the music of JefersonPillar, an Adventist musician.

“It was simply fantastic. Mission is waiting for us!” said Thamires Ueislla, who attended the program.

Maranatha has held a similar program in North America for decades, and this is the first time Maranatha has coordinated a convention outside of North America. Called the Maranatha Convention or “Mission: Maranatha!” the event highlights the organization’s current work. Volunteers share stories of their experiences in the mission field and the impact service has on both their lives and local communities. Adventist Church leaders share the needs for churches, schools, and water wells.

In 2015, Maranatha established an office in Brazil to develop a volunteer program in the country. That year, Maranatha also launched a Portuguese-language version of Maranatha Mission Stories, a television program about Maranatha’s mission. Maranatha Histórias de Missão debuted in April of that year, and the first team of Brazilian volunteers headed to Angola in September. Since then, Maranatha Brazil has mobilized 15 Brazilian teams to countries around the world.

Maranatha has worked in Brazil numerous times throughout the organization’s history. Leaders reported, however, that Maranatha kicked off a major effort in 2010 to build churches and schools. “Through collaboration with the local Adventist leadership, Maranatha has completed more than 950 projects in Brazil,” they said.