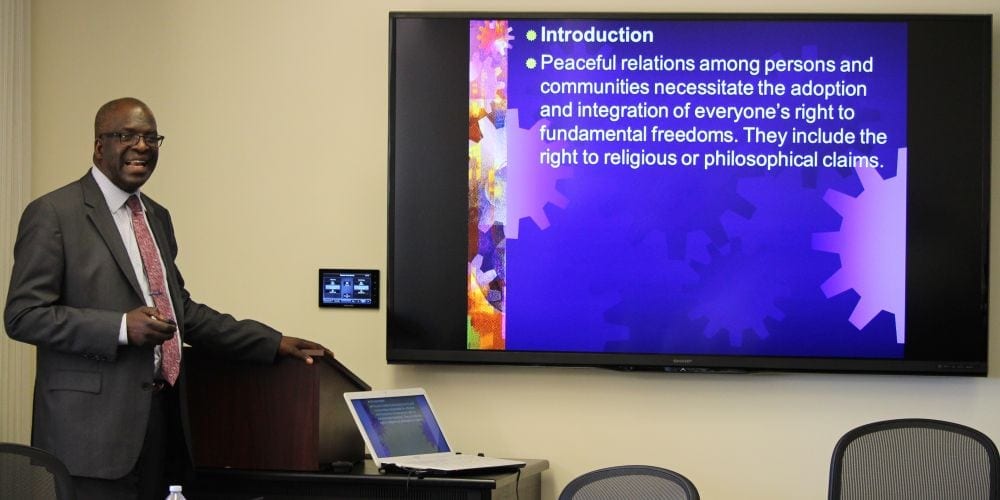 True religion is comprised of faith mixed with elements of forgiveness and reconciliation, not a divisive force that fuels tension and violence in society as many people believe, a group of scholars, lawyers and religious freedom advocates declared at a major forum organized by a Seventh-day Adventist-founded group.

The 17th annual Meeting of Experts, organized by the International Religious Liberty Association, brought together some 20 academics at Pepperdine University School of Law in Malibu, California, to consider the role of religion in current global conflicts, and to focus on ways that faith can, instead, be a powerful force for peacemaking and conflict resolution.

“We need to use faith anchored in forgiveness and reconciliation,” said Robert A. Seiple, a former U.S. ambassador at large for religious freedom who serves as IRLA’s president. “We need to know our own faith and, likewise, we need to understand our neighbor’s faith and respect it.”

Seiple, who gave the first of 10 presentations at the four-day gathering last week, focused on his firsthand experience with the horrific 1994 Rwandan genocide. He described visiting the country in the aftermath of the violence and standing on a bridge over a river clogged with hundreds of decaying bodies.

One of the most troubling aspects of the Rwandan genocide, he said, is that it took place within a “Christianized” country. Some 85 percent of the total population identified themselves as Christian.

Despite this colossal failure on the part of churches in 1994, religious values have since played a vital role in rebuilding social stability, he said. As Rwandans have reclaimed their country, they have shown the world the power of forgiveness. Seiple noted that many perpetrators of the genocide are today living side-by-side with the families of their victims.

Each presentation during the Meeting of Experts was shaped in some way by two key questions: “How can we live with our deepest differences?” and “How can the best of religions overcome the abysmal record of religious wars, religious ethnic cleansing, and genocides fueled by religious discrimination?”

Although the forum examined those questions from a scholarly perspective, the issues that drive the work of the gathered scholars were far from abstract, said Ganoune Diop, secretary-general of the IRLA.

“Too many people suffer discrimination, persecution, or even martyrdom or genocide because of their religious differences,” Diop said.

Some 5.5 billion people — or 77 percent of the world’s population — live in countries with “a high or very high overall level of restrictions on religion,” according to a Pew Forum study released earlier this year.

The gathering brought together a diverse panel of scholars who represented universities and organizations from seven countries. Presenters included David Little, professor emeritus of Harvard Divinity School; Brian Cox, senior vice president of the International Center for Religion and Diplomacy; Cole Durham, president of the International Consortium for Law and Religion Studies based in Milan, Italy; T. Jeremy Gunn, professor of international relations at Al Akhawayn University in Ifrane, Morocco; and, Amal Idrissi, law professor at the University of Moulay Ismael in Meknes, Morocco.

Over the past two decades, the Meeting of Experts has aimed to bring together some of the world's foremost scholars and practitioners in the field of religious freedom to track legal and sociological trends. Papers presented at the annual meetings are published, and have produced a significant body of academic and practical resources. The papers from this year’s Meeting of Experts will be published in the 2015 edition of Fides et Libetas, which will be available later this year from the IRLA, can be contacted through its website, irla.org, or its Facebook page, facebook.com/IRLA.HQ.

The IRLA was established by the Seventh-day Adventist Church in 1893 and is the world's oldest religious freedom advocacy organization. It promotes freedom of belief for all people, regardless of faith, and has non-governmental organization status at the United Nations. Along with the annual Meeting of Experts, the IRLA sponsors regional religious freedom festivals and forums, and every five years organizes a world congress, which attracts an international mix of scholars, legal practitioners, government officials and human rights advocates.