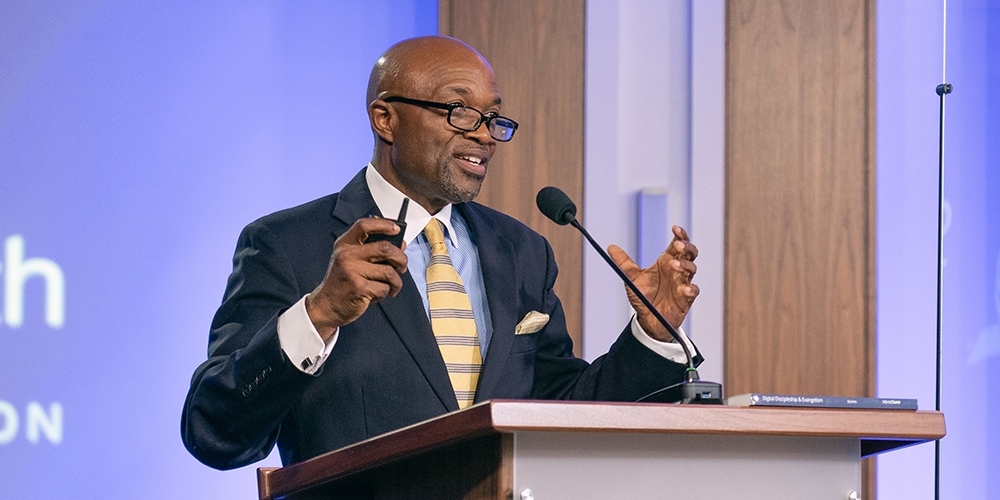 This annual business meeting, which is being conducted virtually by video conference, with livestreaming on the NAD website and various other social media platforms, will provide the opportunity for the more than 300 executive committee members to receive reports, elect personnel, amend policies, strategize, and fellowship online with church leaders and laypersons who are dedicated to sharing Christ’s message of hope and wholeness with North America and beyond.

Leaders hope this year’s theme will inspire delegates to pray for the Lord’s Spirit as they work to help hasten Jesus’ second coming.

“Our theme for this year-end meeting is ‘Come Holy Spirit.’ Come, Holy Spirit — it actually was inspired from a song that we all heard, and we used to sing some time ago at our summer camps and academies, and even at some of our colleges and universities back in the mid to late seventies,” said G. Alexander Bryant, president of the North American Division, as he opened his report. “And so it is a prayer of ours for the Holy Spirit to come in the power that God has promised.”

Bryant gave his appreciation for the division’s membership and leadership, thanking church members, pastors, educators, and the leaders of conferences, unions, and the division for their dedication during the past five years. Bryant touched on the extraordinary efforts underway during the coronavirus pandemic.

“God has given us so much to give to the world. And that is our mission: ‘to reach North America … with the distinctive, Christ-centered Seventh-day Adventist message of hope and wholeness,’” he said. “That is what God has called us to do. I want to thank [you] for what you have done and are doing during the COVID-19 pandemic we have found ourselves in.”

“And I thank our God,” Bryant continued. “How faithful God has been to our members and us! God has been good to us. We thank the Lord for what He is doing, what He has done, and what He will continue to do in our new reality.”

Bryant gave a summary of some successes the NAD has had in the past quinquennium. He shared that more than 150,000 were baptized into the church, that more than 900 churches were planted, and that for several years tithe surpassed one billion dollars. The division also acquired the church and member resource center called AdventSource; moved into its own building; added almost 100 women to pastoral ministry; and successfully navigated tithe parity plans.

In the current situation with COVID-19 closures still in effect across the division, Bryant reported that large-scale meetings still happened — in cyberspace. He shared that thousands were reached through the NAD’s virtual Vacation Bible School, more than 2,000 attended the Youth and Young Adult Ministries OneTeam Playbook 2020 training convention, and that the Society of Adventist Communicators convention broke records with more than 650 registered for the abridged, two-day event.

Bryant showed a slide of the NAD’s baptismal record during the past 20 years, noting significant spikes in 1999 and 2009. Those were years in which the focus was evangelism. “What if we work together in mission to do this one particular thing, for this particular year? We see a decided increase when we come together and do things,” he said. “I praise God for what He has done and for what He is doing. I believe God wants to do more; I don’t believe God is finished in the North American Division territory. I don’t believe that our best days are behind us; I believe those best days are still ahead of us. I believe God wants to do more. We must ask God to do more. And we must be prepared for Him to do more with us.”

He said that while the division has experienced incremental growth, exponential growth is different. Incremental growth is fairly static. Exponential growth, however, multiplies as it goes each year, said Bryant. “Do you remember the exponents [in math], how 10 to the second power went to the third power, it grows as you grow the number? If this number was exponential, we would have more people as we go along, getting baptized because you have more and more people working. Maybe we are baptizing, but are we making disciples?”

Bryant also highlighted the reality that many church administrators are retiring or close to retirement, and the need is great to mentor younger leaders now. “Do we have a sufficient enough development, mentorship, coaching system in place to help the next group that comes along?” he asked, and then shared that a later breakout session will address this question — and others about the church’s future.

A triple threat of crises in recent years — the trifecta of racial injustice, COVID-19, and economic fallout experienced in North America — is something Adventists are not immune to, said Bryant. “We have members who are in need; our communities are in need. God is asking His church; we cannot put our heads in the sand. We have to be relevant to our communities. We must meet their needs as Jesus did.”

“One of the things I love about Jesus is that when He began His public ministry, He echoed, in Luke, what had been predicted in Isaiah,” shared Bryant. “Jesus said, ‘The Spirit of the Lord is upon Me because He has anointed Me to preach the gospel to the poor; He has sent Me to heal the broken-hearted, to proclaim liberty to the captives and recovery of sight to the blind, to set at liberty those who are oppressed’ [Luke 4:18, NKJV]. Right after Jesus came out of the water, being baptized, right there, He repeated this text. God is calling His people to be like Jesus; to do what Jesus did. We have to engage with what’s going on around us in our communities. We have to be a part; we are not disconnected from them.”

He continued, “Jesus came right in and ministered to their needs, and He won their confidence. Then He bade them, ‘Come and follow me.’ That is the method that God is calling us to in this trifecta. In the COVID, in the economic fallout, in the social unrest, God has given us a method; he has given us a calling. He’s given us a blueprint on how we can make a tremendous impact in this environment.”

Bryant gave examples of how churches who shut their doors during the coronavirus pandemic are seeing online attendance soar thousands above what they’d see on any given Sabbath. We can meet needs through community service as well as online engagement, he said, sharing the Digital Discipleship & Evangelism guidebook by way of example. Bryant concluded this section of his report by asking “What if” thought questions and showing video clips from several division ministries and departments on what reaching out might look like if we follow Jesus’ methods in this digital age. He asked those watching the livestreamed meeting to reimagine the church and our approach in reaching out, recognizing the church’s strength of diversity, passion for mission, and creative approaches using technology, social media, the educational system, networking, and community service.

Bryant encouraged attendees to work together on mission and multiplying God’s church using media and mentoring to reach — and train — His people. “The only thing that can stop us is not working together and not claiming God’s Spirit,” Bryant reiterated.

The report concluded with these thoughts from Bryant: “There is nothing the devil can do against us: if God is before us, who can be against us? We have the Lord on our side. And so as we talk and build strategy over the next five years, we’re just beginning the conversation. What is God calling us to do in this COVID and post-COVID era? What is God calling us as a church in North America to do? Where is God moving us to?”

Bryant’s report to the division’s executive committee in session on Thursday afternoon was preceded by the appointment of the year-end meeting parliamentarian, Todd McFarland, associate general counsel of the Seventh-day Adventist Church; the nominating committee report and recommendation, and subsequent executive committee vote on the division’s new undersecretary; and a special video report highlighting the Lord’s work in all the NAD’s nine unions.

After Bryant gave the president’s report and it was accepted by the body, he asked the committee members to spend 30 minutes in video breakout rooms, brainstorming answers to five questions enumerated in his report.

Discussion areas included how to work better collectively; how leaders and members can create an exponential growth culture; how to better leverage all media; how to ensure leadership development; and the role and function of the division, union, conference, and local church in the mission of the Adventist Church. Moderators from each breakout room were to share highlights of those conversations in later general sessions — and after several more breakouts on different topics occur during YEM.

The reports were followed by the vote to recommend several executive committee members to a writing committee to help contextualize a statement for North America based on the General Conference’s global statement on “One Humanity: A Human Relations Statement Addressing Racism, Casteism, Tribalism, and Ethnocentrism.”