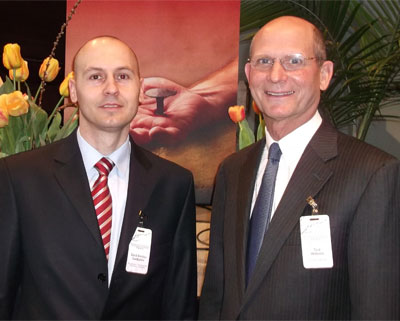 The conference, sponsored by the Education
Department of the General Conference, brought together more than 150 college
and university presidents, education directors, and GC administrators from each
of the 13 administrative units of the world church.

According to Lisa Beardsley-Hardy, director
of Education for the General Conference, the conference was planned to
highlight four priorities essential for the success of Adventist tertiary
education: reinforce Adventist identity and mission; strengthen leadership and
administration; increase the capacity of all teachers to carry out the
redemptive purposes of Adventist education in their classes; and provide
opportunities through which students may become more dedicated disciples of
Jesus Christ.

In the more than 20 years since the last international
conference, changes in education, and society in general, have made assembling
Adventist educators an essential ingredient in maintaining the high quality of
Adventist education. Beardsley-Hardy points to the need to train educators to
be more effective in promoting the mission of the church in their educational
settings. “The Adventist [educational] system has grown tremendously. We’ve
added a lot of graduate and professional programs, and as a system we have 1.8
million students in a much more complex environment than ever before,” she said.

She added, “People value Adventist
education. We produce good graduates, so there’s tremendous pressure in terms
of people wanting a quality education in a safe environment for their
students.”

John McVay, president of Walla Walla
University appreciated the opportunity to embrace a shared vision with his
peers. “There is value in being in the same room and saying, ‘Yes, this is what
we’re about in Adventist higher education.’

“There’s a fresh transparency in higher
education that is coming about for a lot of reasons,” said McVay. “We’re all
being asked to be forthright about our data, who we are, who we’re becoming,
and what we’re accomplishing for our students. I think we’ll be more overtly
Adventist a decade from now.”

“I tell people, ‘Babcock University is
actually a giant baptismal class, where people pay to attend baptismal classes
over a period of four years.’” Makinde reports that of its nearly 8,400
graduate and undergraduate students, anywhere from 500 to 1,000 students are
baptized each school year. In addition, he says, “We have friends everywhere.”

In a global movement that often identifies size and growth
with the blessing of the Lord, how should we think about the smallest
Seventh-day Adventist college in the world—one with an enrollment of only 10
students in each three-year program?

“We believe that God’s call is to faithfulness, not
necessarily numerical success,” says Emil Gadjalov, principal of the Bulgarian
Theological Seminary (Theological College “Stefan Konstantinov”) in Sofia,
capital city of the Eastern European nation of 7 million.

Gadjalov smiles at the distinction of being the smallest
unit in a global Adventist college and university system of 113 institutions
and a total student population of nearly 137,000. The entire student population he serves would
fit in a corner of one of the classrooms at the largest Adventist universities—Brazil
Adventist University (Centro Universitario Adventista de Sao Paulo); Babcock
University in Ogun State, Nigeria; and Sahmyook University, Seoul, Korea. Those universities enroll nearly 1000
students for every one of Gadjalov’s seminarians.

“The demise of Communism in the early 1990s left the church
in Bulgaria in need of educated pastors,” Gadjalov says, “but it took until
2005 to formally establish a school to train persons for professional
ministry.” In the last nine years, at
least five of the seminary’s graduates have found employment as pastors.

Between 2006 and 2011, 35 pastors serving the Bulgarian
Union of Churches Conference earned bachelor’s degrees through a carefully
organized sequence of intensive classes that featured some of the world
church’s top theologians. That era
helped to significantly improve the readiness of the church’s pastoral
workforce for ministry in the country, according to Gadjalov.

With a full-time staff of only two—himself and an
administrative assistant—Gadjalov has built an instructional team of up to 15
pastors and visiting professors who supply college-level courses over six
semesters and three academic years.
Courses include the full range of options available to seminary students
at larger institutions, including instruction in Hebrew and Greek, Biblical
exegesis, preaching, and pastoral care.

“This work is not an easy thing to do,” he says in heavily
accented English, “but we know that God is blessing us.”

The seminary is accredited by the Adventist Accrediting
Association (AAA) to offer a bachelor of arts degree, and is operated by the
Bulgarian Union of Churches Conference.

The Seventh-day Adventist Church in Bulgaria was organized
in 1920, and has a membership of more than 7500 persons worshipping in 124
churches.