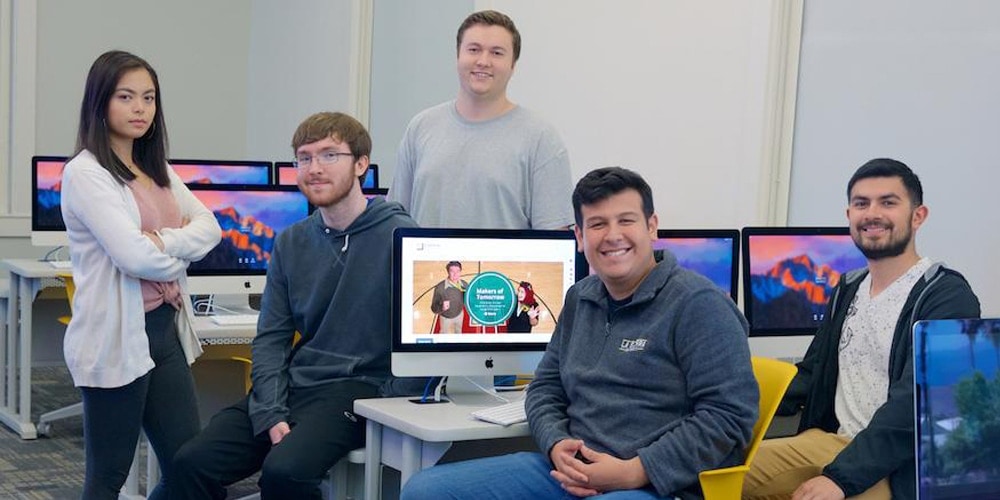 On May 24, 2018, seven La Sierra University students got a helping hand toward reaching their goals in computer science and mathematics with scholarships from energy conglomerate Edison International.

The Edison Scholars program awards of $2,143 each were presented at La Sierra’s annual Scholarship Awards Ceremony, during which 226 students received a total of about $372,000 in scholarship funds from a variety of sources, managed by the Office of University Advancement. The Edison scholarships were awarded to five computer science majors and two mathematics majors of La Sierra, a Seventh-day Adventist university in Riverside, California, United States.

The awards derive from a $15,000 Edison Scholars grant the university received last December for supporting students studying science, technology, engineering, and mathematics, or STEM subjects. This year’s grant brings to $75,000 the total amount awarded to La Sierra since the 2014–15 school year by Edison International for STEM scholarships and tutoring.

“STEM scholarships help students defray the cost associated with getting a degree, but most importantly they inspire and inform students of the diverse STEM careers available to them,” said Marvin Payne, chair of La Sierra’s chemistry and biochemistry department and principal investigator for the grant. “There is currently a shortage of professionals in the STEM industry, and these scholarships contribute to our goal of filling the gap to achieve a more diverse and inclusive STEM workforce.”

The racial and ethnic diversity of students in STEM majors reflects the broad diversity of the campus, a factor that has distinguished La Sierra University nationally. Of the university’s students majoring in STEM fields, 31 percent are Hispanic, 22 percent are Asian, 21 percent are international students, 16 percent are white, and 5 percent are black/African-American.

Ethan Morales-Vierna, a junior computer science major and scholarship winner, is from Cudahy, California. He will intern at aerospace contractor Northrop Grumman during the summer of 2018, where his responsibilities will involve translating existing computer code into another programming language.

“My initial reaction to being selected to receive the Edison scholarship was ‘shocked,’ ” he said. “This past year was challenging academically. Not to mention all the other highly qualified applicants. However, when I heard I was selected I felt very honored and grateful,” he said.

“Receiving this scholarship will allow me not to have to spend hours worrying about finances and instead be able to spend those hours on schoolwork or extracurricular activities,” Morales-Vierna said.

“This award is very significant to me as it will help lighten my financial burden and allow me to focus more on school,” said scholarship winner and computer science major Cody Johnson, a sophomore from Phoenix, Ariz. His concept for a computer game with potential uses on smartphones was included in his application for the scholarship.

Johnson says he isn’t “too picky” about exactly where he might work in the future, “but hopefully, someday I can work with a company like Microsoft,” he said.

Mia Lorraine Laurea, a junior computer science student from San Francisco, who also won an Edison award, wants to become a game developer for PlayStation or Nintendo and has designed a simple “roll-a-ball” game on an application called Unity.

“This award is significant since it is a part of a bigger community that wants to make an impact in the world through STEM,” she said. “This award will drive me to become the best woman in computer science that I can become.”

The scholarships are intended to help fill occupations in fields the United States would like to bolster in its pursuit of innovation. According to the US Department of Education, STEM-related occupations are expected to increase 14 percent overall through 2020, with the greatest increase predicted in biomedical engineering at 62 percent. The field for medical scientists is expected to grow 36 percent, for systems software developers by 32 percent, computer systems analysts by 22 percent, and mathematics jobs by 16 percent.

Edison scholarships are among a wide range of tuition funding opportunities for La Sierra students. Outside of endowed scholarships managed by the Advancement office, the university this school year provided $17.3 million to undergraduates and $1.86 million to graduate students through a variety of scholarships, including 17 different institutional programs of which approximately 11 are renewable awards.

Edison International, a generator and distributor of electric power, is the parent holding company of Southern California Edison and other subsidiaries. Edison International’s philanthropic arm in 2017 awarded $11.4 million in education grants out of a total $21.8 million in charitable giving.