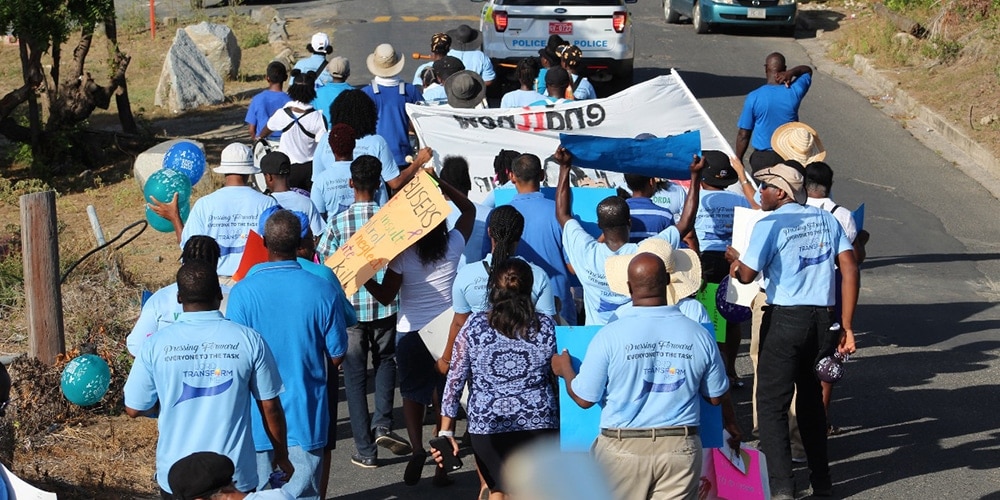 Seventh-day Adventists on Virgin Gorda in the British Virgin Islands recently marched against violence as part of the church’s EnditNow initiative. The Adventist initiative focuses on ending violence against women and children.

The march, held on August 25, 2018, gathered dozens of young church members from the only Adventist church on the island to spread anti-violence messages on banners, posters, and balloons, accompanied by the music of a Pathfinder band and a flatbed truck with speakers blasting the messages. The group walked throughout Spanish Town and around the main valley of the island.

The activity was part of a two-day event that brought training to church and community members and engaged them to spread awareness specifically on child abuse and violence against women in their neighborhoods and communities, local organizers said.

Thompson spoke about the trauma of emotional abuse and pleaded with members to be vigilant about any signs of child abuse in the church and community.

According to recent statistics, one out of 10 children around the world will be sexually abused before their 18th birthday, and 90 percent of perpetrators are a person known by the abuse victim.

Kya Huggins-McKenzie, a church member and facilitator of the Darkness to Light program, led the training session, in which trainees watched videos and discussed questions from their workbooks on what it takes to protect children; the practical steps adults can follow to recognize signs of abuse; learning the facts and talking about them; reacting responsibly, and more.

“We are happy that we have opened this avenue for persons who are in abusive situations,” Thompson said. “It is the first time that the church takes such training activities to heart in Virgin Gorda. I think that God is also pleased that we have decided to be His vessels to take this message into our churches and communities.”

As the day drew to a close, marchers gathered at the church for a presentation facilitated by Thomas Alexander, a psychologist who is a member of the church and works for the British Virgin Islands government’s Department of Education. Alexander shed light on child abuse within the Adventist Church, how it can be dealt with, and how it can be prevented.

At the end of the training, participants were presented with a certificate and made a personal pledge to be responsible for the safety of at least one child.

“I pray we have put an end to blissful ignorance in our churches and communities,” Ambrose said. “It’s time to see it, stop it, and report it!”

The Virgin Gorda Adventist Church has more than 150 church members and belongs to the North Caribbean Conference, which is headquartered in St. Croix, U.S. Virgin Islands.

Jaimeson B. F. Hazel contributed to this report.