‘It Was Physically and Emotionally Tough’ 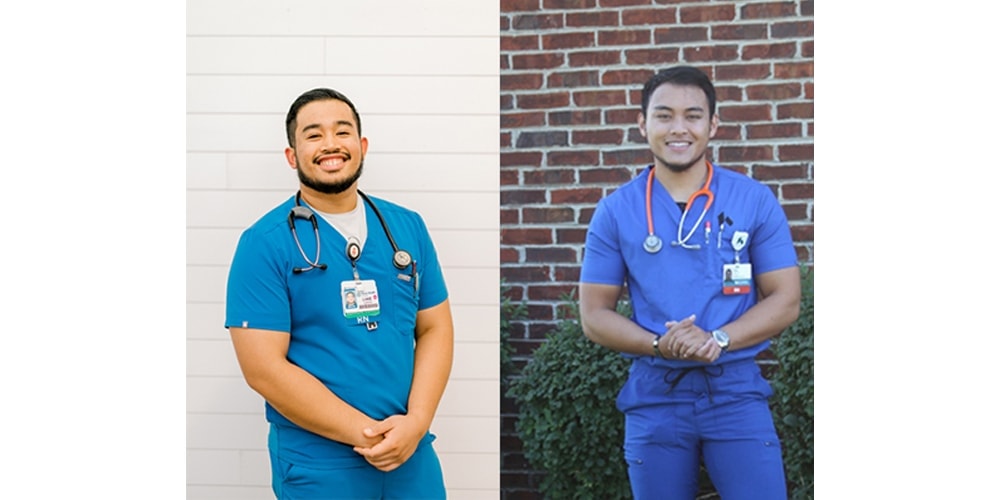 When the pandemic started, Southwestern Adventist University (SWAU) nursing graduates Dex Esmeralda (2019) and Luke Zabala (2018) were fresh in their careers. They would soon join thousands of nurses across the country experiencing a time unlike any other — encountering more trauma in a year than some nurses encounter in a lifetime. Yet both were prepared for the challenges at hand because of the clinical and spiritual training they received at SWAU, a Seventh-day Adventist educational institution in Keene, Texas, United States.

Esmeralda was working at Kettering Health Network in Ohio when COVID-19 hit the area. As everything began to shut down, including the surgical unit where Esmeralda worked, he was left with two choices: stay home until his unit reopened, or work long and hard hours in the COVID unit.

“Working in that unit was both physically and emotionally tough,” Esmeralda said. He described the environment as intense and chaotic. While bringing back one patient from cardiac arrest, another would code in a nearby room, and the staff would rush to try and save that life. They saw people die on a daily basis.

A thousand miles southwest, Zabala had just started a new job in the progressive care unit at Texas Health Huguley Hospital in Fort Worth and was immediately immersed in caring for COVID patients.

“We didn’t know what to expect, of course; but, like nearly every other hospital in the world, we got hit hard,” Zabala recalled. “The experienced nurses said they’d never seen anything like it in their lives.”

While the nursing skills labs and clinicals Zabala took at SWAU gave him hands-on, real-world experience, it was the spiritual side of nursing that helped him navigate the pandemic. As a result, he said, he’s certain he has been right where God wanted him to be.

“Whenever things started to feel out of control or stressful during my shift, I’d remind myself why I was really there,” Zabala said. “It was a very scary time, but SWAU gave me the mindset that I was there to minister to those in need, and that kept me going.”

Esmeralda added that in addition to high-quality education with caring and knowledgeable professors, the greatest thing he took away from SWAU was an enhanced relationship with God.

He shared that one patient spent an hour after the end of his shift talking about how her husband had died in front of her the previous year. “I prayed with her in the end, and we both started tearing up; she thanked me over and over,” he said. “It was the greatest feeling to be able to be there for the patient.”

Now, more than a year into the pandemic, Zabala and Esmeralda continue to rely on God for daily guidance in their patient care. They use the spiritual foundation they formed at SWAU to find purpose in their careers.

“Taking what I learned at SWAU and applying it in the real world allowed me to find my purpose,” Esmeralda said. “No matter what the future holds, I’m ready because I know my purpose in this world is to follow God.”